Half a dozen people who voted against a leadership spill against Michael O’Brien last week will not be included in new Coalition leader Matthew Guy’s frontbench when it is announced on Sunday.

Mr O’Brien, who lost the leadership to Mr Guy last week, expressed disappointment at the news that the party’s youngest MP Brad Rowswell was not offered a position in shadow cabinet. 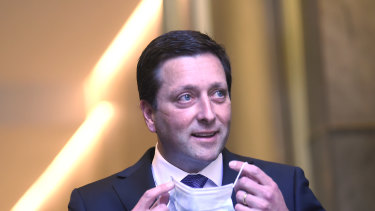 Multiple MPs told The Age the revamped frontbench was not selected on merit and will reward Mr Guy’s backers, but others said the movements ushered in long-due generational change.

Mr Rowswell, who was the opposition’s spokesman for energy and renewables and voted against a leadership spill, is seen as an up-and-coming MP and pre-empted his omission by releasing a statement on Saturday afternoon.

“While I am disappointed to no longer serve in the shadow cabinet, I am grateful for the opportunity I have had to drive policy change for the benefit of every Victorian,” his statement read.

“I love the community I serve. I remain committed to standing up each day to be a voice for you in our Parliament and deliver for our area.” 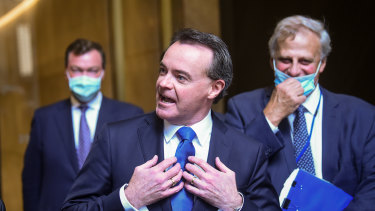 Michael O’Brien after the leadership spill with two of his closest allies, Ed O’Donohue (left) and Kim Wells.Credit:Justin McManus

Reacting to the announcement, Mr O’Brien said in a tweet that he was “very disappointed”.

“[Mr Rowswell] is a huge talent, did a great job as a shadow minister and – as our youngest MP – will be an important part of the Liberal Party’s future,” Mr O’Brien wrote.

Four other mostly long-serving supporters of the ousted leader will also lose their portfolio responsibilities.

Respected shadow attorney-general Ed O’Donohue (who had told Mr O’Brien weeks ago he did not intend to contest the next election) will exit Parliament by Christmas, while former treasurer Kim Wells will be omitted along with Mornington MP David Morris and upper house MP Gordon Rich-Phillips.

Mr O’Brien – who decried “political games” within his party upon his exit – declined an offer to remain in shadow cabinet.

The new-look team is expected to include leaders of the failed coup in March, who were dumped as shadow ministers at the time. Among them, Brad Battin, Nick Wakeling, Richard Riordan and Ryan Smith – all of whom backed Mr Guy. It is also probable that Mr Guy’s supporters within the inner or outer shadow ministry – like new deputy leader David Southwick, Tim Smith and Brighton MP James Newbury – will be promoted into more senior positions.

Two Liberal MPs, speaking anonymously because the reshuffle has not yet been announced, said the shake-up was not the right start for My Guy if his intention was to unite the party.

“To think these changes made under a new administration are based on merit is fictional,” one said.

“Line up the people out of jobs before Tuesday [when Mr O’Brien was toppled] and how they voted, and it tells a pretty clear story.”

Another MP said it was wrong to dump Mr Rowswell because he was one of the party’s most promising young assets. “This was a golden opportunity for Matthew to prove he was serious about unity, and instead he’s done a factional stitch-up for the boys,” the MP said.

A third MP said the changes signalled generational change. “There will be a genuine expectation that some of those who are dumped will retire,” they said.

Mr Guy told The Saturday Age the Liberal Party – which has seven female MPs out of 31 – needs more women and he hoped gender diversity would improve as MPs retired.

A plan to give the shadow portfolio of women and children to male MP Matthew Bach prompted frustration within the party in recent days. Mr Bach was eventually appointed to the newly-created role of shadow spokesman for students.

The changes come as the new Liberal leader is set to appoint Mitch Catlin to lead his office as chief of staff. Mr Catlin has worked as a marketing consultant for Swisse and Myer and formerly as a Channel Seven reporter and a media adviser to Howard government minister Rod Kemp.