For many little girls, the father-daughter wedding dance is an important and special moment to look forward to. But for Texas teens Ashlee and Kaylee Halbert, they were scared that moment might never come.

“I was at school and my mom texted me and asked if I could come home early if possible,” Kaylee, 19, said. “My family and I were in the living room when my parents told us the diagnosis and it was really hard to remember what I was feeling because it almost felt like the whole world just stopped. We didn’t know all the details yet, but my heart just sank to the bottom of my stomach when I heard the words ‘brain tumor.’”

After their father, Jason, was diagnosed with terminal cancer last April, the Halberts had to prepare for the worst, his wife Nicole Halbert told “Good Morning America.” 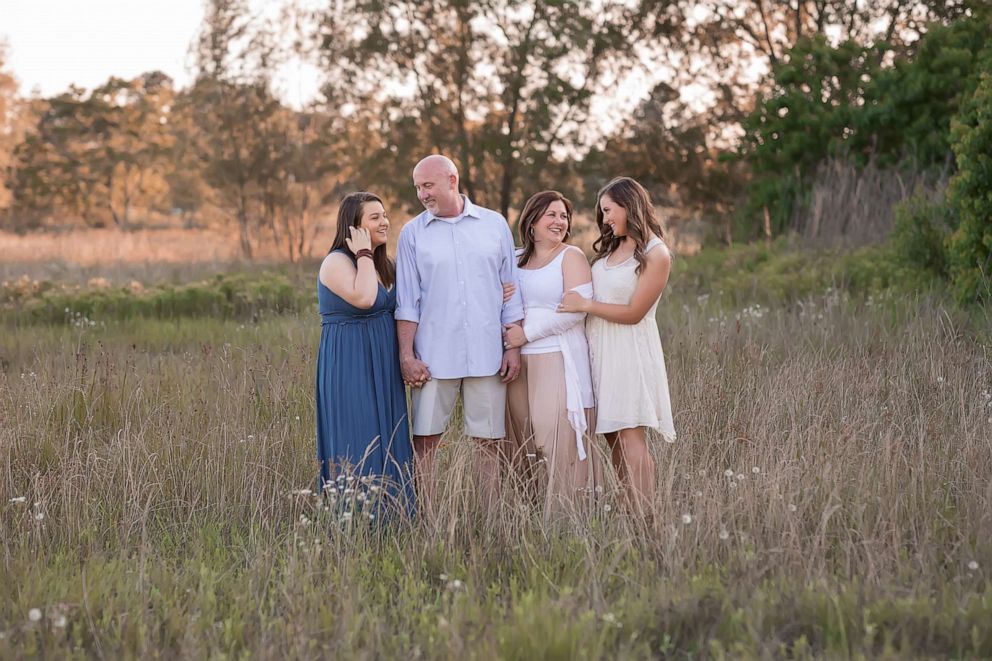 “He started out with some symptoms in March such as slurred speech, blurred vision and balance issues, which prompted the first doctor appointment,” she added.

Later, Jason was sent to a neurologist where they ran an MRI and found a mass in the brain stem. Doctors said they weren’t sure of the level or grade of the tumor, so he was transferred to the University of Texas MD Anderson Cancer Center in Houston for further treatment.

Although the cancer was inoperable, the Halberts were positive and Jason started radiation in May for six weeks along with an additional chemotherapy drug, handling it fairly well. 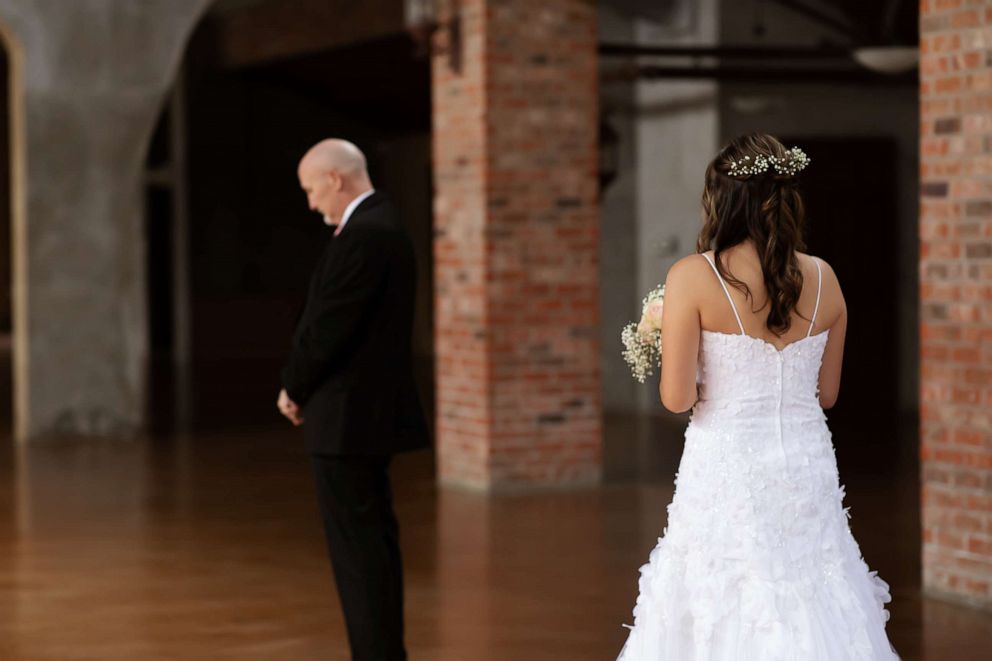 “We even took a break and went on a vacation to Mexico in July,” Nicole said. “But as soon as we got back, he started having severe headaches while also beginning rounds of a new chemo treatment. He didn’t tolerate it well and the cancer spread.”

Two months later, Jason had undergone a spinal tap, where doctors learned that the cancer cells had spread significantly into his spinal fluid. It was then that the Halbert family heard the very words they’d been dreading. Jason had only weeks to live. 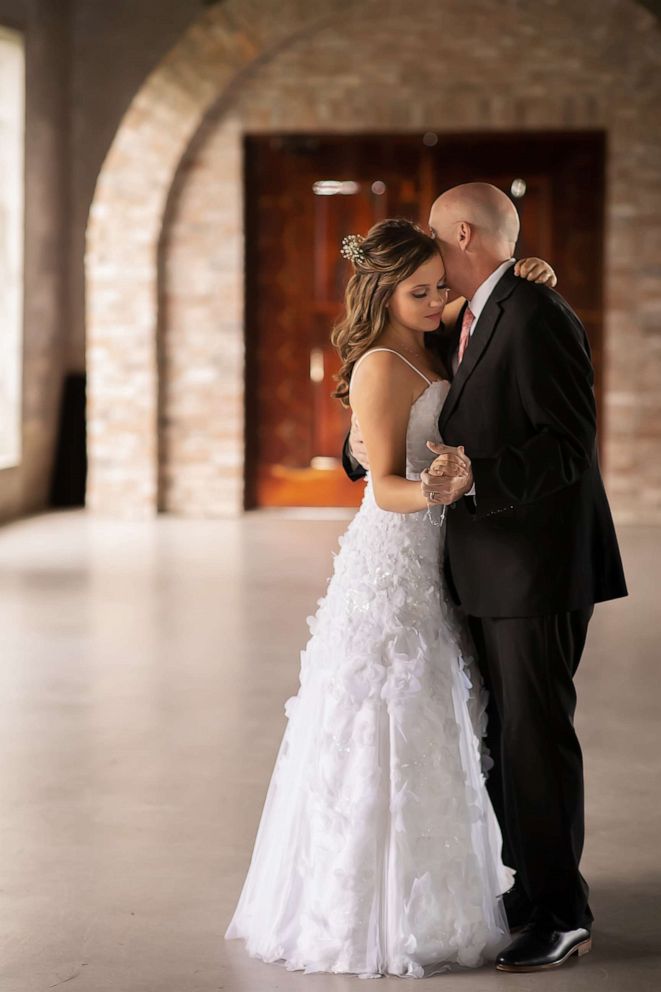 “We were floored when we heard that,” Nicole said through tears. “I thought to myself, how can I fit everything in during the time we have and accelerate all these memories?”

Nicole said she sat down with her family shortly after to talk about their bucket lists and what they could do together before the inevitable. Both of her daughters brought up the wedding dance.

“These girls have had this song picked out and have had their weddings planned since they were just 7 years old,” she added. “This has been something my oldest has talked about and wanted her whole childhood — she’s a little romantic and a daddy’s girl and the thought of all the things she wouldn’t get to do, like dance with her daddy at her wedding, I think that’s what bothers her the most. Kaylee knows her wedding is years down the road and the chances of her father being here for it are slim to none.”

So, it was decided. With the help of friends and family, the duo, along with their mom, decided to take fate into their own hands and create their own wedding dance and record it for the future.

“My initial thought was, well, we could just do it in the living room!” Nicole added with a laugh. 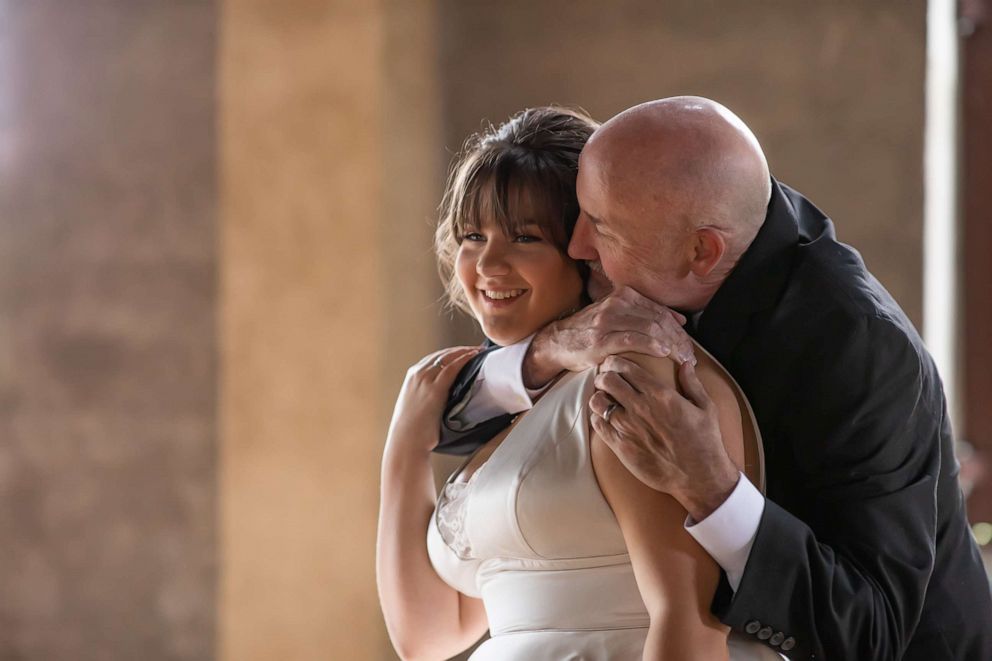 But after reaching out to the community on Facebook, Nicole received an outpouring of support and was able to get a photographer and videographer, even booking a wedding venue — Old Dobbin Station in Montgomery, Texas, — for the occasion.

On Oct. 14, Ashlee, 16, and Kaylee finally danced with their father at a wedding ceremony — or at least close to how they imagined it. Each daughter has two videos — one of the actual dance and one video story where Jason was interviewed privately, offering words to be shared publicly for when the time comes. The videos will be a sweet surprise to his daughters on their future special days.

“I was so happy that I got to do my dance and he got to see that image of me in a wedding dress but having done it at 18-years-old and nowhere near my real wedding day felt weird,” Kaylee said of the moment. “I hated that we had to do it but was grateful that we got to.”

The Halberts said they were extremely overjoyed with the generous feedback they received from their community. Each daughter was able to choose from a variety of donated dresses and their first grade teacher even created their bouquets. 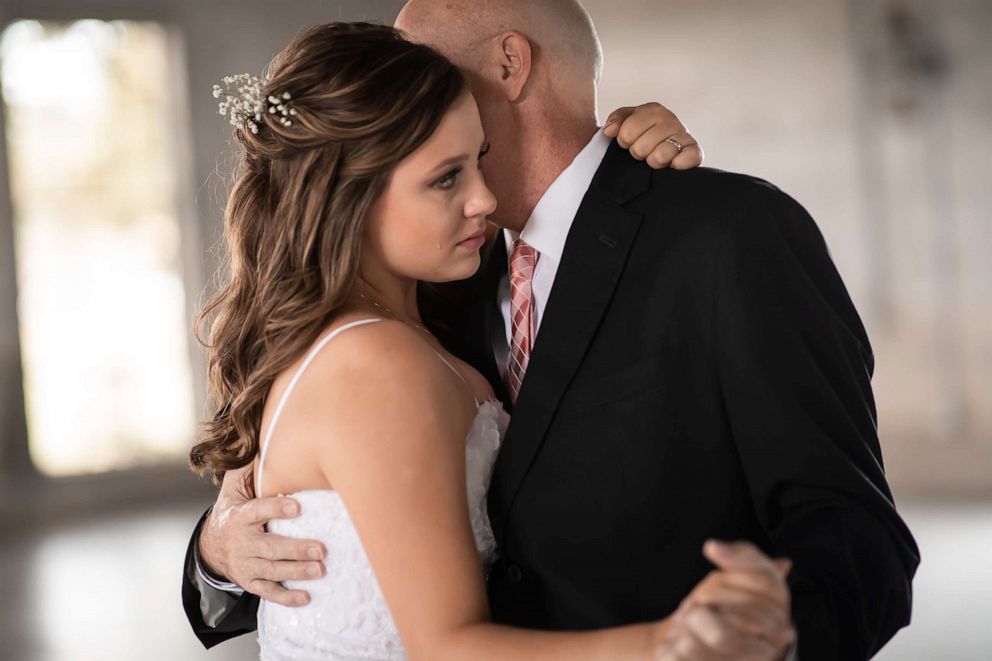 “I think it’s exactly what they needed,” Nicole added. “During the dances, the tears came and it was tough but I tried really hard to engrain it in my mind to remember it later. I had to make sure he was doing okay — I’m being caretaker and mom all at the same time — it was just tragically beautiful.”

During the course of the day, Jason gave each daughter a blue topaz infinity anklet for “something blue” to keep as a reminder that he will always be with them. 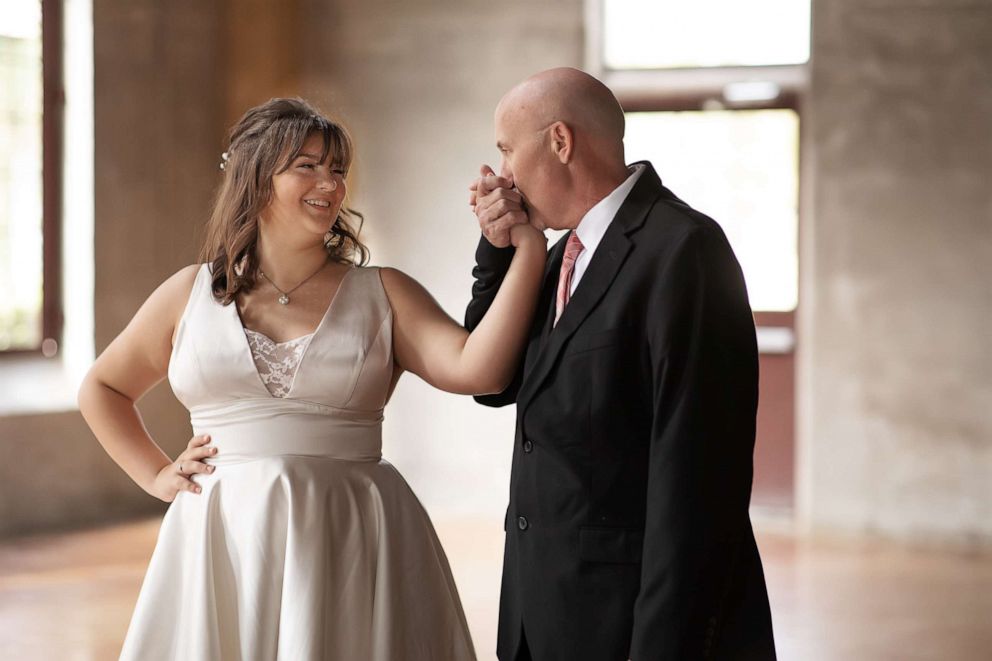 “There was a gammon of emotions because we were laughing and then also had tear strokes down our faces,” Nicole said. “As we finished up, we all felt like we completed something. They will have all these memories to share with their children, and when they put their wedding photos on the shelf, they can include a photo with their dad.”

“Jason said his favorite part was when the girls came out and surprised him looking like brides,” Nicole relayed from her husband. “He will always have that vision and moment with him forever.”

The Halberts said they will continue to create memories and spend as much time together as possible. 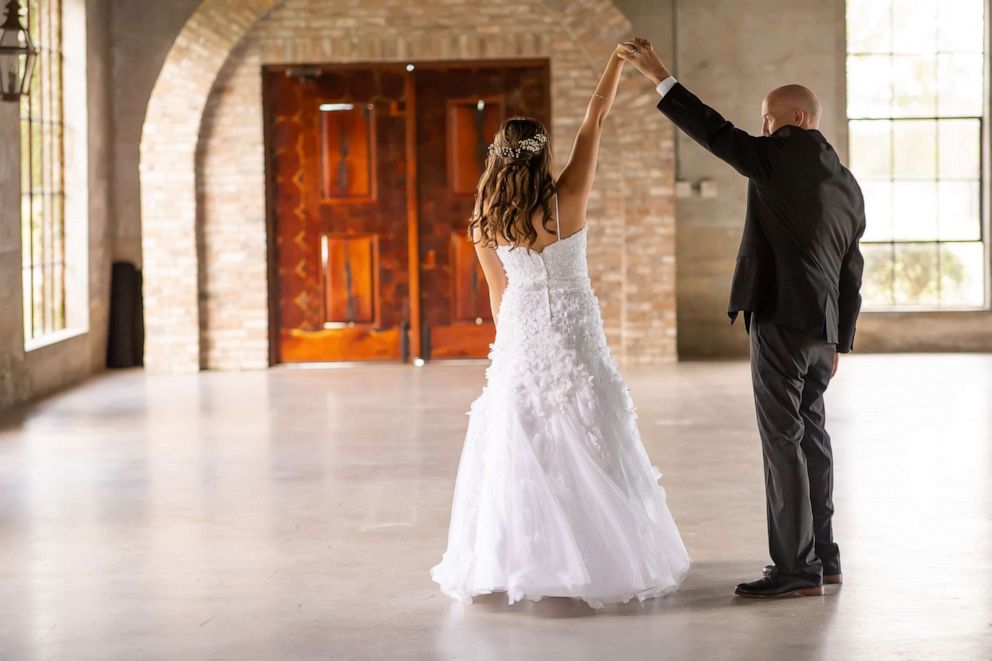 “Life gets away from you,” Nicole said. “Many people lose a loved one suddenly and we have the gift of time to pre-create a memory. Get out of the day-to-day disease or whatever you are fighting and just live through it.”

Kaylee and her sister said they couldn’t agree more. 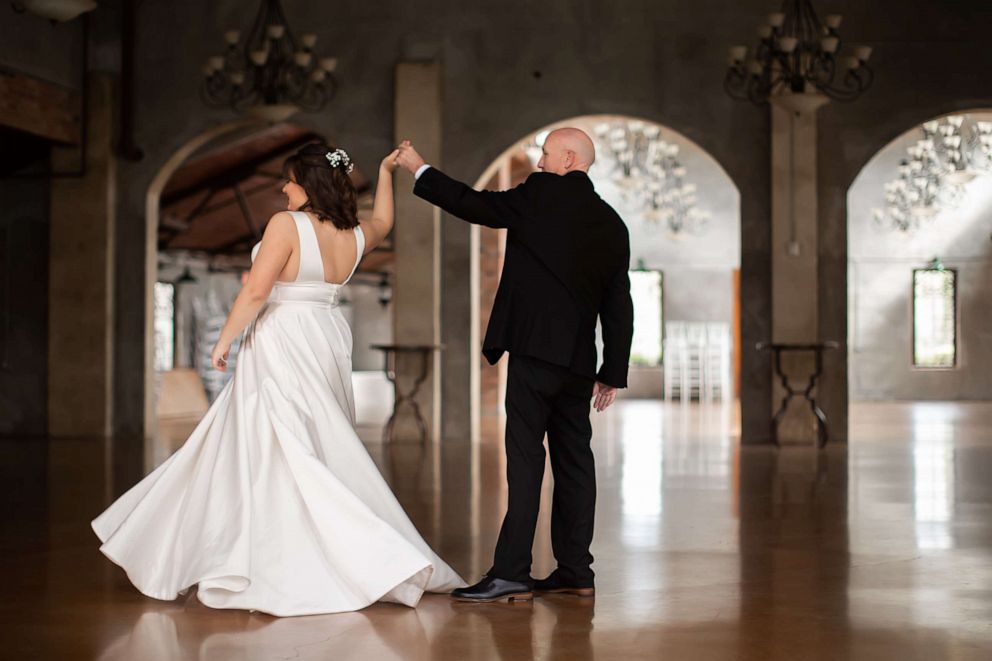