Fashion student, 20, who battled with mental health issues says she moved in with pensioner, 85, for Lodgers for Codgers TV experiment to dispel older generation’s ‘misconception’ that young people ‘have it easier’

A 20-year-old who went to stay with a no-nonsense pensioner for a unique experiment has told how she decided to take part because she wanted to dispel the ‘misconception’ among the older generation that people ‘have it easier when they’re younger.’

The Channel 4 programme, Lodgers for Codgers, sees pensioners who live alone paired with young people who are struggling to get into the housing market.

In the second episode, which airs next week, Sophie Donald, 20, goes to stay with devout Christian and dedicated charity worker Eunice Mcghie-Belgrave, 85, from Birmingham – who offers the fashion student her perspective: ‘Most of the young generation,’ she explains. ‘They don’t work very hard.’

Speaking to presenters Ranvir Singh and Sean Fletcher on Good Morning Britain today, Sophie explained how she opened up to Eunice about her mental health struggle when she was 12, where she found herself in hospital.

‘Well obviously it was a very difficult period of my life and I felt very confident to speak to Eunice about it. I wanted her to understand. I remember her saying something like, “we have it easier when we’re younger.’ 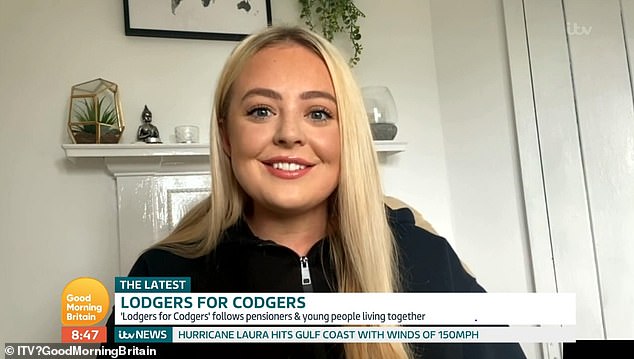 Sophie Donald, 20, goes to stay with devout Christian and dedicated charity worker Eunice Mcghie-Belgrave, 85, from Birmingham, in next week’s episode of Lodgers for Codgers 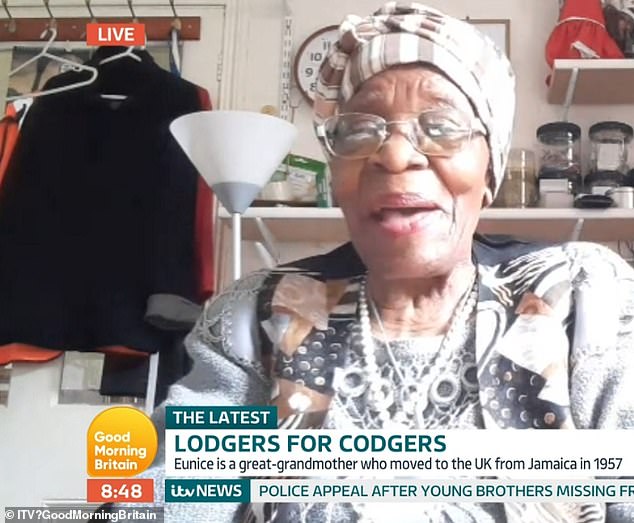 Eunice (pictured offers the fashion student Sophie her perspective and says: ‘Most of the young generation. They don’t work very hard’

‘I wanted her to know that just because I’m young and might have some things that are easier in life, it doesn’t mean I’ve been not been through difficult times myself – and sometimes that can be a misconception with generations.’

A clip from the show sees Sophie reading out Eunice’s house rules ahead of her arrival: ‘No smoking in the house – fair do’s. Keep bedroom clean – never make my bed. No drinking in the house? Maybe we can try and work around that rule first…’

Speaking of why she wanted to take part in the show, no-nonsense pensioner Eunice told Good Morning Britain: ‘Well I am a community activist and I think this will benefit young people as a whole – to see that all generations, although they think they may not be able to help, will be able to do so and give good advice.’

However, Sophie admitted that at the beginning. she didn’t actually want to sign up to live with Eunice.

‘I turned around and said to the producers, “I’m not doing it, I’m not going to stay with Eunice,” she said. ‘But then I thought she’s really structured in her ways so thought it’d be a good time to change that a bit and liven things up.’

When asked about any clashes and the real revelations, Sophie explained: ‘To be honest, we actually got on really well at first. It was quite a surprise. 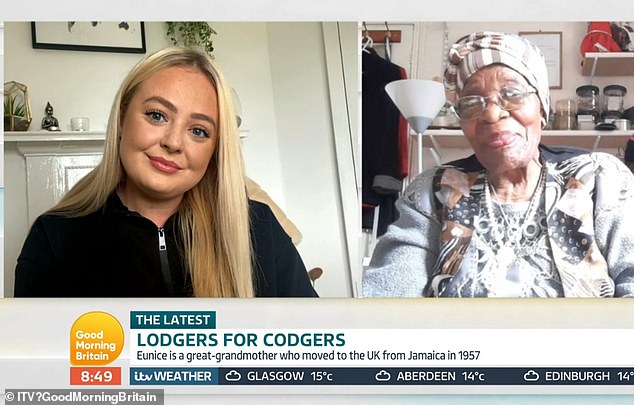 Sophie (picgtured left) admitted that at the beginning. she didn’t want to sign up to live with Eunice (right) 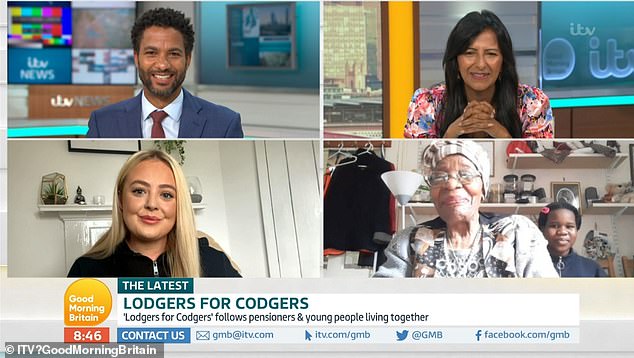 Eunice revealed she and Sophie had a few of the things that she had in common with Sophie – much to her surprise. Pictured, with presenters Ranvir Singh and Sean Fletcher

‘Both of us had been quite hesitant about the fact we were going to be together. It was quite calm and relaxed but it was obvious we had a couple of differences.

‘Obviously with the drinking, I did bring a bottle of gin with me. I didn’t actually realise I wasn’t able to bring the gin at all.’

Eunice added: ‘Well I am a Christian so I’m not a drinker of alcohol so I had to say something. I told her it was not to be opened or drunk in my house – and she did listen to me.’

She continued: ‘We had lots of laughter, conversation and she also taught me yoga. We went out to the restaurants together, we talked, did a little bit of cooking and it just came together.

Eunice went on to explain a few of the things that she had in common with Sophie – much to her surprise.

‘I was surprised how she took on my way of thinking and the way we talked to each other,’ she said. ‘I had my cup of tea every time. I didn’t ask for it, she made it for me. I really do like that!’

The pair also told how they are still in touch, with Sophie encouraging others to reach out to the elderly, adding: ‘You can gain so much knowledge from life – especially when you’re younger. Everyone thinks they know everything, but the experience in life is so important.

‘I really respected Eunice and her story – and what she’s been through at a person. An older person can give a lot more stability than moving in with a friend.