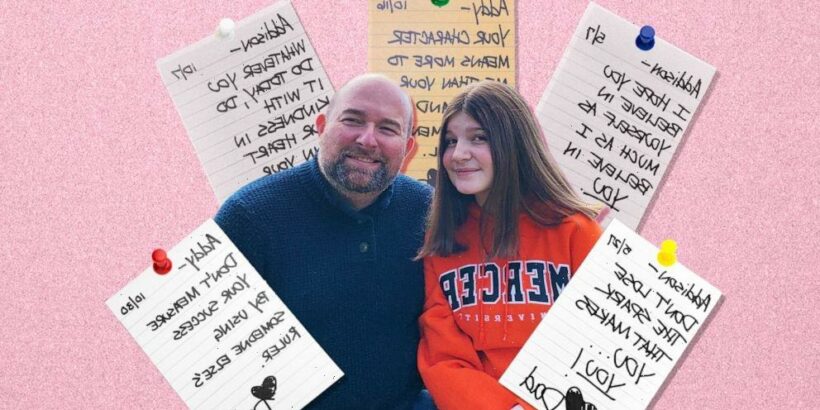 A little note has gone a long way for one Louisiana family.

“Be nice to others. Not everyone will look like you. Learn to spot the unique and special things in other people. You have the power to change someone’s life.”

That was the first of many inspirational notes Chris Yandle put in his daughter Addison’s lunch box to boost her morale at school. The father of two told “Good Morning America” how his simple motivational message that started on Aug. 14, 2017, turned into weeks, months and now years of uplifting encouragement for Addy. Now it has become an equally rewarding part of his routine.

“It makes me feel like I’m doing my part as a dad,” Yandle said. “Seeing how she’s growing up and how well she’s done at school, her mindset, her attitude, that makes me more successful than any amount of books I could sell — because if I was able help her find that confidence and mold that change then I’ve done my job as a parent.”

Don’t ever let someone else determine your value. You’re always worth everything.

Yandle uprooted their family multiple times due to his career in college athletics and moved back home to Louisiana when he lost his job in 2016. Starting fourth grade, Addison was in her fourth school in five years.

“After all the moves, this was finally the moment where we started to notice that she was anxious, worried about school and nervous,” Yandle said. “I was blaming myself and felt awful and that’s where the notes started.”

“I wrote her a message, slipped it in her lunch box and I kept doing it. It was my way of saying, ‘I’m here, I’m back.’ I was present,” he said. “I realized about a month or two in, I was writing them for her just as much as I was writing them for me. Because I needed that reminder of ‘Hey, you can get through the day.’ A lot of these things parallel our lives.”

“These are messages and words that I’ve learned the hard way through my adult life,” he explained of the thought that goes into each note. “And it’s also a way of me leaving something with her — to help guide her as she grows older.”

From funny and endearing to life lessons and blunt oddities, Yandle has covered a lot of ground with his more than 690 handwritten notes.

As he thinks about the fast-approaching new school year, Yandle said that “recycling through some of these I’ve written kind of helps my mind think about some of the things that I want to say to her going into eighth grade.”

“I want her to have fun. I’m hoping to be a little bit more funny with her this year,” he said. Addison will go back to school on Aug. 6.

Have a goal or a dream? Be like a postage stamp—stick to it until you get there. Always dream big.

As his daughter has grown up, Yandle said he told his wife, “I don’t want her to be this meek, mild, timid woman. I want her to be strong, opinionated and independent.”

The father of two never planned on the notes garnering so much attention, but after a push from his daughter’s principal, Yandle fundraised enough money to publish a book, “Lucky Enough: A Year of a Dad’s Daily Notes of Encouragement and Life Lessons to His Daughter.”

“Each page not only is the message I wrote her, but there’s an anecdote or story behind each one,” he said.

Don’t listen to people who talk behind your back. They’re behind you for a reason.

Advice to other dads

Listening twice as much as you speak

“One thing I’ve learned throughout all of this, with both Addison and Jackson, our kids ultimately don’t care what we do or who we are professionally, they only care that we’re here, that we listen and that we care about them,” he said. “Not how much money I made or cool places I traveled, ultimately they cared that I came home, sat down with them, did home work and listened.”

He continued, “Ultimately just being there no matter how you do it — from batting cages to watching ‘Below Deck’ — it doesn’t matter as long as you’re there and just present I’ve learned it goes so much further than anything else I could ever do.”

Read more of Yandle’s words of wisdom below

Nachos are simply tacos who don’t have their life together, but we still love them.