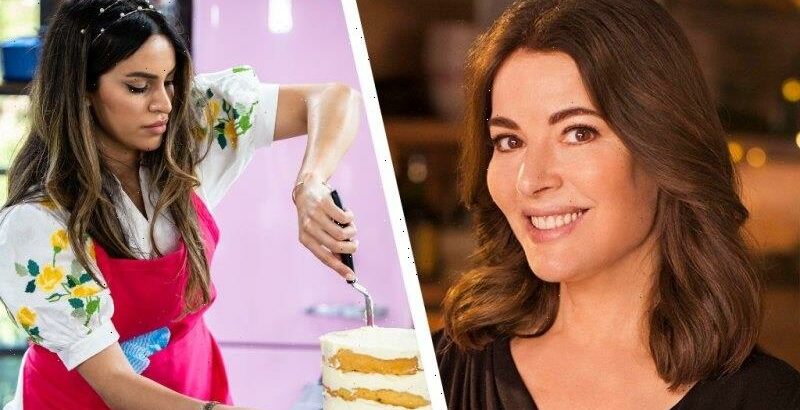 Welcome to your daily meditation. This is a time to reset, recentre, and form the basis for a weeklong craving for pina colada pavlova.

For those who benefit from visual stimulus, flick to The Great British Bake Off on your nearest Wi-Fi-enabled device. Today we’ll explore the innate peace and dopamine rush of baking shows. Find your centre, and find out what the hell a dacquoise is. 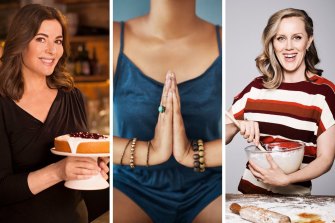 From Nigella Lawson, left, to Claire Hooper on Great Australian Bake Off, the meditative power of baking shows is all in the mix.

Conflict drives the human experience. From survival (navigating the basement level of IKEA on a Saturday with someone you just started dating) to self-improvement (ranking second-lowest on the scoreboard at spin class); from emotions (seeing your friend ugly cry and resisting the urge to make fun of them) to entertainment (man in shorts chases other man in shorts who has ball; man without ball gets ball; man with ball prevails), there is nothing more satisfying than overcoming a challenge, whether you are participant or spectator.

The urge to triumph is what keeps us at the top of the food chain. But think of the cost: the energy exerted in hiding your ugliest habits from your new partner, the ache in your crotch from collapsing onto the spin bike a bit too hard. Sometimes it’s wonderful — even necessary — to shun our practical natures and enjoy the momentary respite of peace. Enter baking shows.

Be aware: the baking show and the cooking competition are not the same beast. Their differences lie not only in ingredients, but in tone, format, and the amount of cortisol they evoke in their viewers. 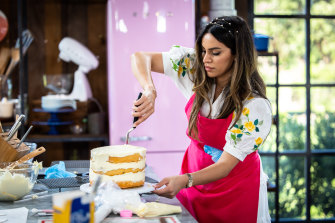 Consider the fraught score of the MasterChefs and Kitchen Nightmares. The drama, lightly scripted to anchor you to the edge of your seat as you wait to find out if so-and-so’s Bordelaise sauce will reduce in time, if someone else can make an edible birthday cake out of wholegrain mustard, edamame and stick deodorant. The feuds between contestants, a judge’s infuriating bias. Your pulse races from the safety of your living room. You’re so invested you only double-screen through the whole episode, rather than triple. Suspense builds. Tension tightens. The stakes rise, rise, rise, and then — release. Your favourite chef wins a six-figure prize and gets their face on a jar of rendang meal base.

Contrast this with the serenity of your Bake Offs, Nigella specials, the odd Jamie Oliver episode. The colour palette is a calming pastel. The soundtrack: optimistic. The stakes are so low they’ve penetrated the earth’s crust. There’s no fight to the death, no rivalry, no snarky talking head breaking through the fourth wall. It’s just nice people making lovely treats on a sunny afternoon. You could do away with the competition bit altogether and it wouldn’t change the structure of the show or our enjoyment of it.

That lovably nervous young woman has overworked her pastry, two, three, four. It’s going to be brittle and disgusting.

Perhaps it’s why some people watch golf: seeing someone perform your favourite hobby at a higher skill level than you could ever reach. I would never dream of attempting a hazelnut croquembouche, but it’s nice to imagine a world in which I might. 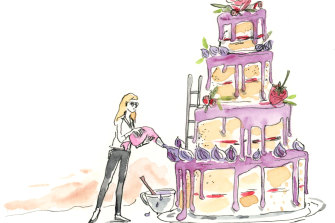 On the most frantic of workdays, I escape into a daydream where I find myself piping lilac rosettes onto a cake so tall it dwarfs me. There are no irritating stakeholders here, no missed deadlines, no markedly unimportant emails flagged “!!Urgent!!”. I could pipe for hours; satisfying little kisses of buttercream onto an impeccably crumb-coated vanilla sponge while all the worries in the world and the tension between my shoulders melt away.

Take a moment to appreciate something that is neither challenging nor vapid: neither a horrific documentary about sex trafficking nor the simultaneously controversial and inane vocal fry of a particular famous family. Baking shows are the absence of social commentary. They demand no participation, elicit no opinion. They simply are. In the age of 15-second attention spans, 11 hours of daily screen time, record-breaking weather, inescapable social politics, mounting economic and humanitarian crises, and the concerning way Gen-Z is trying to bring back low-rise denim and plucked eyebrows, the ability to deliver content that explicitly soothes its viewer is a remarkable achievement. Take only memories, leave only cake crumbs.

Congratulations on completing your daily meditation. Go and get yourself a biscuit.