‘If I’d known that YOU were the pilot, I wouldn’t have got on’: Female aviator details shocking sexist abuse she has suffered from male passengers

Even in 2018, women still face discrimination and unfairness simply because they’re woman and that prejudice is only ten-fold for females working in a male-dominated field.

But one British pilot has decided to call out the sexism she faced while flying in a series of tweets that has since gone viral.

On Saturday, Charlotte Knowlson, a pilot for EasyJet, admitted that she was ‘baffled’ when two male passengers made incredibly sexist comments to her, taking to Twitter to share her frustration and disbelief over the situation. 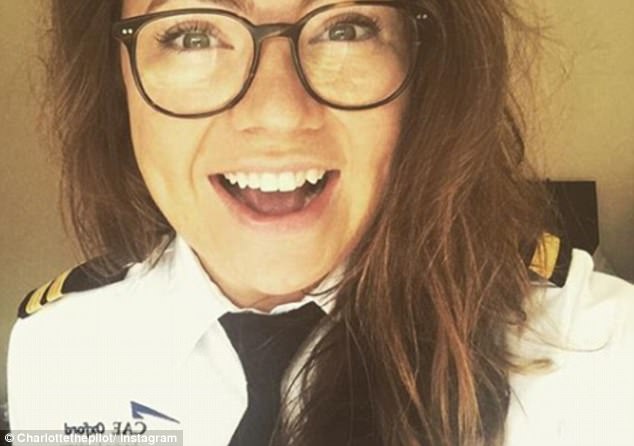 Clapping back: Charlotte Knowlson has decided to call out the sexism she faced while flying in a series of tweets that has since gone viral 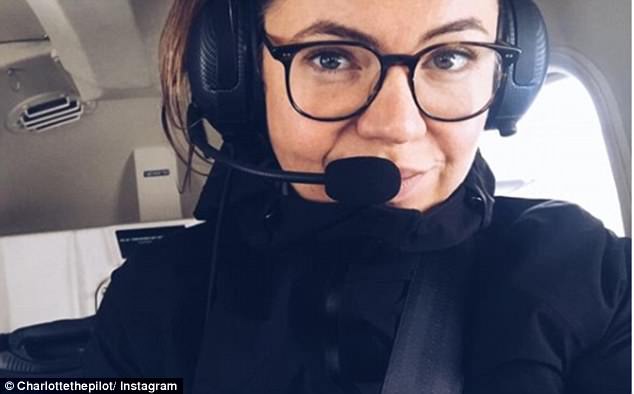 Rude remarks: The female pilot, who began working for British airline EasyJet in March, took to Twitter to share her her frustration and disbelief over the situation 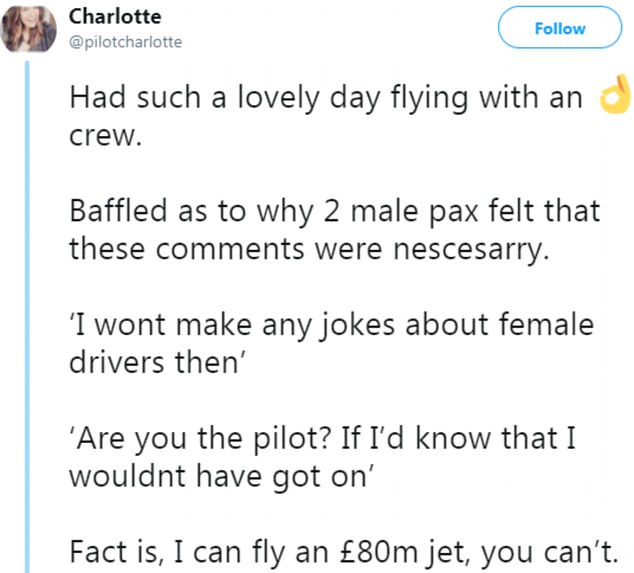 Uncalled for: She posted a tweet that said ‘baffled as to why two male [passengers] felt that these comments were necessary

She tweeted: ‘Baffled as to why two male [passengers] felt that these comments were necessary. “I wont make any jokes about female drivers then”. “Are you the pilot? If I’d know that I wouldn’t have got on.” Fact is, I can fly an £80m ($107m) jet, you can’t.’

And in additional tweets she further detailed her disapproval over the rude comments, which she admitted originally shrugging off in at attempt to be professional.

She said: ‘Being used to this kind of humour, my reaction of course was to be professional, laugh and ask them if they were enjoying the flight.

‘It wasn’t [until] later when a cabin crew member expressed her anger at the comment that it made me think. Why is this normal?’

‘It is this attitude that puts women off and another barrier stopping them from going into male dominated careers. It shouldn’t even be a thing!!! I am a pilot he is a pilot. See, there is no difference.’ 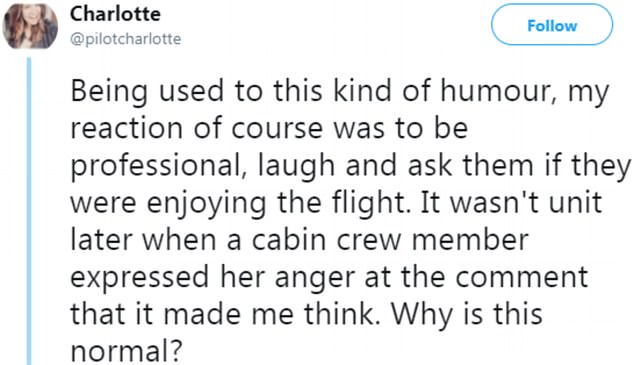 Used to it: In further tweets she explained that she originally laughed it off until a cabin crew member brought it up

Discouraging: She also added that it was these type of comments that turned woman off from male-dominated fields

Ignoring the haters: She shared that she didn’t get to where she is today by ‘listening to these types of comments’

She also added that she didn’t reach this point in her career by listening to these types of misogynistic comments, which ‘saddened’ her.

She said: ‘I didn’t get where I am today by listening to these kinds of comments. I’m not offended, I’m not disheartened. I’m saddened by the fact that this is the attitude some still have and think it is ok [sic] to make these comments to women.’

But fortunately, her Twitter thread, which has since gotten more than 12,000 retweets and 94,000 likes has struck a nerve with her 12.7k followers who took to Twitter to share their support for the pilot.

Struck a nerve: Since it was posted, her tweet has garnered support from followers who think some men need to ‘step off’

The right reaction: One tweet said that the men were trying to flirt away their feelings of inferiority

Happening regularly: Another person said that there wife was a pilot and got the same comments

Fleeting emotions: And another said that they would put money on the fact that he didn’t care about it ten minutes later

Another person shared: ‘Being able to laugh it off and remain professional is exactly the reaction they needed. Showing them you were unphased [sic] by their jokes is perfect.

‘Truthfully, they likely meant nothing and were trying to flirt away their feelings of inferiority, but you did perfectly.’

And another person posted in support of Charlotte in a tweet that said: ‘My wife’s a pilot, every time she flies she gets a “well done dear” or similar from holidaymakers. None of the troops she flew into Bastion or Kandahar felt the need to patronize her.’

And more people shared their disdain for the rude remarks in one tweet that said: ‘Put all my money on the fact he didn’t care about the situation ten minutes later’ and another that said: ‘I would be honored to fly with you.’

A privilege: One person shared that they would be honored to fly with Charlotte

Shouldn’t matter: One person said that the fact that a pilot is a woman should not matter

Disheartening: And another person said that it was sad comments such as these were still happening

More people continued to come to her defense with tweets that said: ‘I flew with a wonderful woman captain on [British Airways] yesterday – she was wonderful but her gender should be irrelevant.’

And another one that said: ‘I’m just sad that people feel the need to make these kinds of comments in this day and age.’

But even with the disheartening comments, people are still choosing to share their inspirational stories with one being a father who shared that at the age of 14, his daughter could ‘fly better loops than me’.

And another person who encouraged Charlotte to ‘keep it up’ and be an example revealed in a tweet that as a pilot, he’s always glad when he hears a woman’s voice saying, ‘Good afternoon, this is your captain’.

But perhaps the most inspiring figure for Charlotte is her brother, Jonny Knowlson, who is a pilot for British Airways. 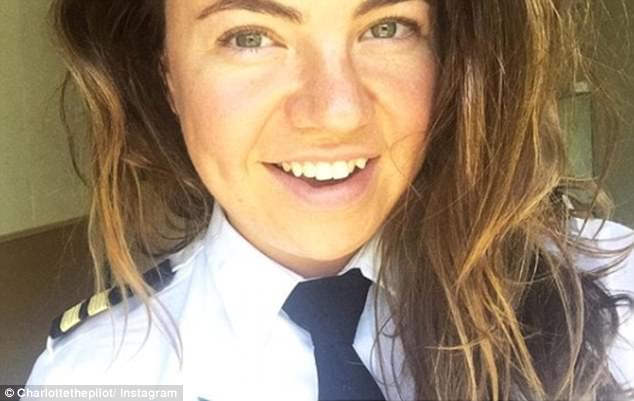 Inspiration: The incident came just a month after Southwest captain and Navy veteran performed emergency landing amid drama on Southwest 1380 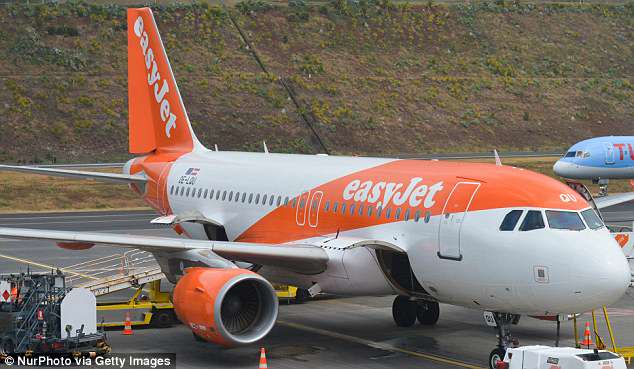 Taking flight: Charlotte is a pilot for EasyJet Airlines (pictured) 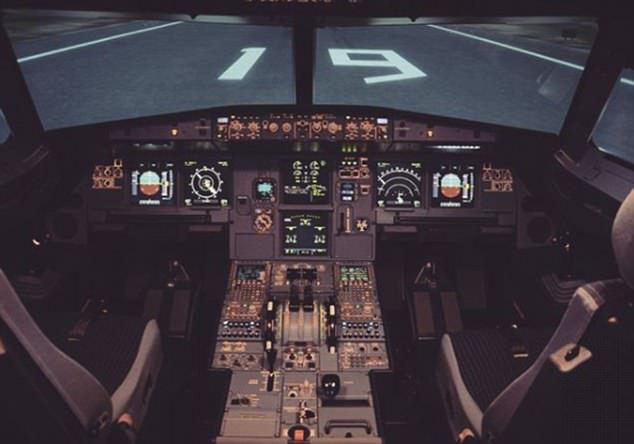 Nice view: Charlotte posted a picture to her Instagram of a picture of the cockpit

The supportive brother even retweeted his sisters post on his account along with the caption: ‘Go sis’ and of course, an emoji of an airplane.

The heroic pilot was responsible for calmly landing a Southwest Airlines flight after a midair explosion caused a woman to be nearly sucked out of the aircraft, leaving one dead.

She was one of the first women to fly an F-18 and quickly brought Dallas-bound Southwest Flight 1380 to safety at Philadelphia International after the explosion at 32,000ft.