‘Disappointing and inappropriate’: Fergie faces an Instagram backlash for gushing about her ‘excellent’ stay at the five-star Athens Marriott in the same week as wildfires claimed 91 lives

The Duchess of York has faced a backlash for gushing about her stay at the five-star Marriott Hotel in Athens in the same week as wildfires killed at least 91 people.

Sarah Ferguson, 58, took to Instagram at the weekend to share snaps of Acropolis, adding: ‘Staff and customer service excellent .. atmosphere superb, very comfortable, a great place for a stay in Athens @marriotthotels.’

Some critics took issue with the timing of her comments, branding them ‘disappointing and inappropriate, with one adding: ‘Wild fires killing scores only  a few miles from here and all she can talk about is the luxury hotel.’

However, others rushed to the Duchess’ defence, pointing out that she had thrown her support behind the victims of the tragedy earlier in the week and was doing her bit to encourage tourism and promote the country to assist its recovery. 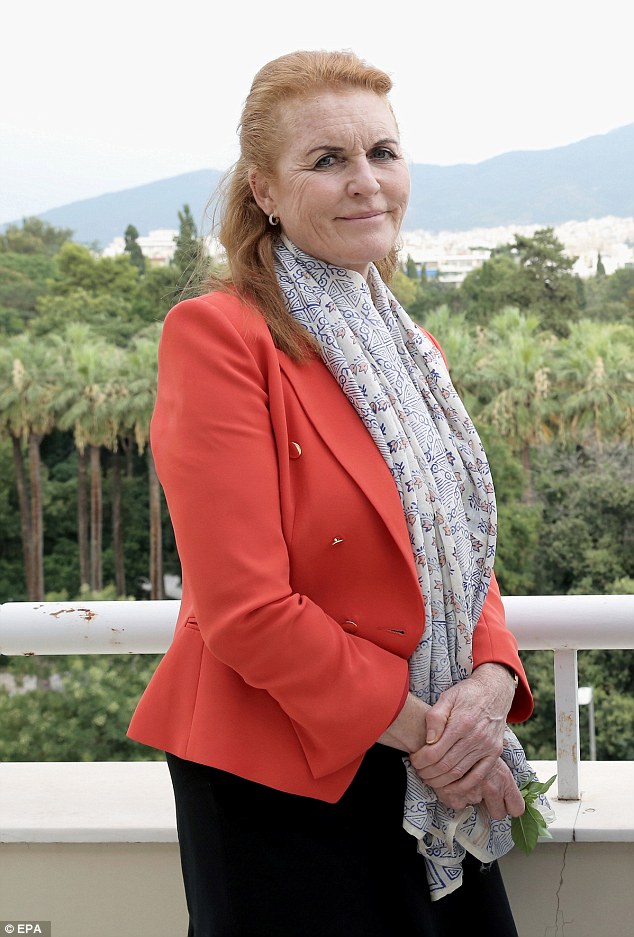 The Duchess of York, 58, pictured at the Ministry of Tourism in Greece last week, has faced a backlash for gushing about her stay at the five-star Marriott Hotel in Athens after wildfires claimed at least 91 lives 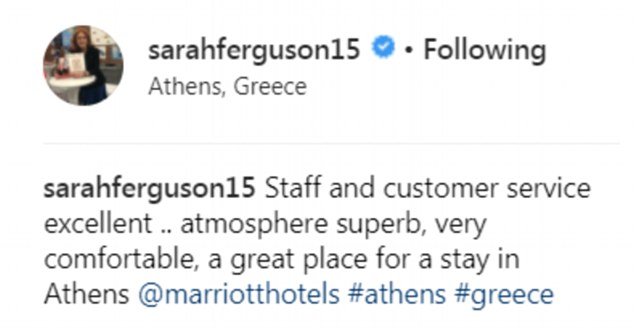 The royal took to Instagram to praise the establishment’s atmosphere, comfort and customer service

Some commenters were not impressed and said that her post was badly timed, given the tragic loss of life near Athens

One wrote: Tourism is a primary source of income for Greece, so if the people stop coming in, jobs and livelihoods are lost.

‘I think Greece has suffered enough financial losses and tragedies. We must all move forward.

Earlier in the week Fergie expressed her ‘deepest sympathy’ to all affected by the tragedy and praised the emergency services for their tireless work.

And during a meeting with Greek tourism minister Elena Kountoura, she vowed to provide ‘every possible help’. The Duchess stayed at the five-star Marriott hotel in Athens on her visit, during which she expressed sympathy for the victims of the wildfires 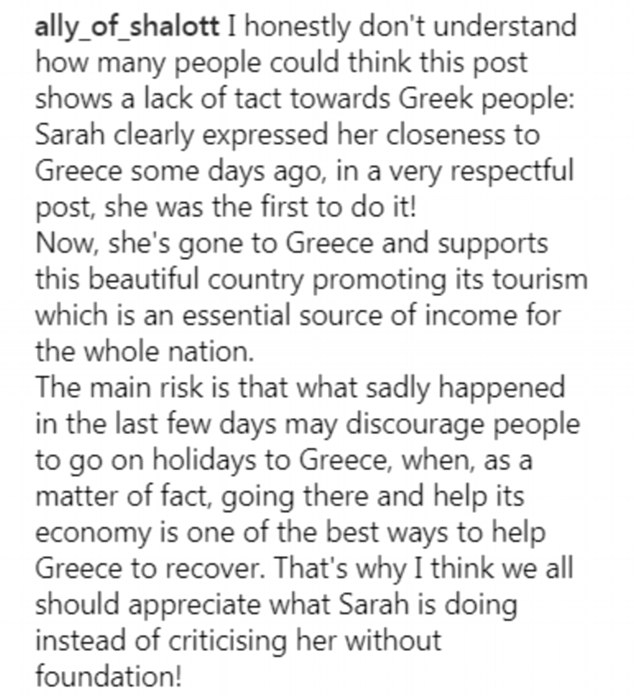 Fans rushed to Fergie’s defence, saying her post was aimed at encouraging people to visit Greece and help the affected areas rebuild after the disaster

She also encouraged Brits to visit Greece to stimulate its tourism industry to help it recover from the devastating fires and floods.

‘We are here to help. Greece is a very beautiful country and… people must come here and see how beautiful it is,’ she told a press conference.

The ex-wife of Prince Andrew was speaking from experience as she holidayed in the country with Kate Moss in 2016.

Ms Kountoura thanked her and said the government was doing everything in could to help victims of the disaster.

How the Greek wildfire tragedy unfolded

The two largest wildfires – one 20 miles north-east of Athens near Rafina, the other 30 miles west of the capital in Kineta – broke out on Monday during hot, dry summer conditions. But by the evening it had escalated to a disaster with infernos breaking out either side of Athens.

Gale force winds rapidly fuelled the fire’s spread to Mati a town north-east of Athens, destroying an estimated 1,500 homes and turned roads and pavements to ash.

Dashing to the water was the only way to escape for most villagers, but some – including families with children found clasped in a last embrace – perished behind a wall of flames and toxic smoke as the ‘lightning quick fire’ swept from the hillsides to the sea in less than ten minutes.

Driven by winds of up to 65mph and 104F (40C) temperatures, the worst Greek forest fires in a decade have been described as a ‘national tragedy’ and a ‘biblical disaster with human losses’. One of the youngest victim was a six-month-old baby who died of smoke inhalation.

It is strongly believed that arson was the cause of the fire after Public Order Minister Nikos Toskas found ‘serious indications’ suggesting the inferno was started deliberately.

He said satellite image analysis of the deadly fire and a second blaze that broke out Monday on the other side of the city indicated both had been set in multiple places within a short time frame.

The death toll currently stands at 91 and hundreds have been injured.