Sarah Ferguson has been keeping children (and adults) entertained daily throughout lockdown with her YouTube series Storytime With Fergie and Friends.

But the Duchess of York, 60, has an exciting new project in the pipeline – judging celebrities as they dance with horses for a new TV show.

Fergie has filmed the pilot for upcoming Fox production Dancing With Horses, where stars devise complicated dance routines with the animals.

A keen rider herself, Prince Andrew’s ex-wife is an expert on the panel – and former ITV commissioner Claudia Rosencrantz has claimed she was ‘wonderful’ to work with. 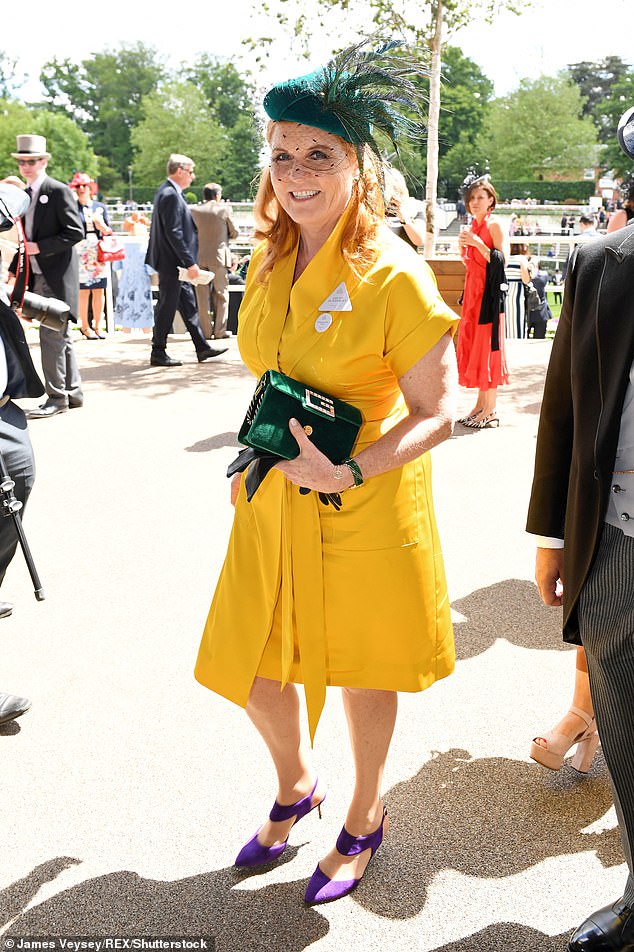 The Duchess of York has an exciting new project to keep her busy – judging celebrities as they dance with horses for a new TV show. Pictured at Royal Ascot in 2019

The producer, who previously worked on I’m A Celeb and Who Wants To Be A Millionaire?, told Deadline the concept for the ‘exquisite’ show has been a dream of hers for almost a decade.

‘It’s been eight years in my head trying to get those horses dancing. It’s literally the most beautiful thing I’ve ever seen,’ she said.

‘It’s like Dancing With The Stars, but your partner is a horse and it is an absolutely, exquisite, complicated, wonderful show.’

The pilot was shot in the UK because Studio 1 required access to highly trained horses from Britain and France, and Claudia admitted shooting with them was a ‘complicated’ job. 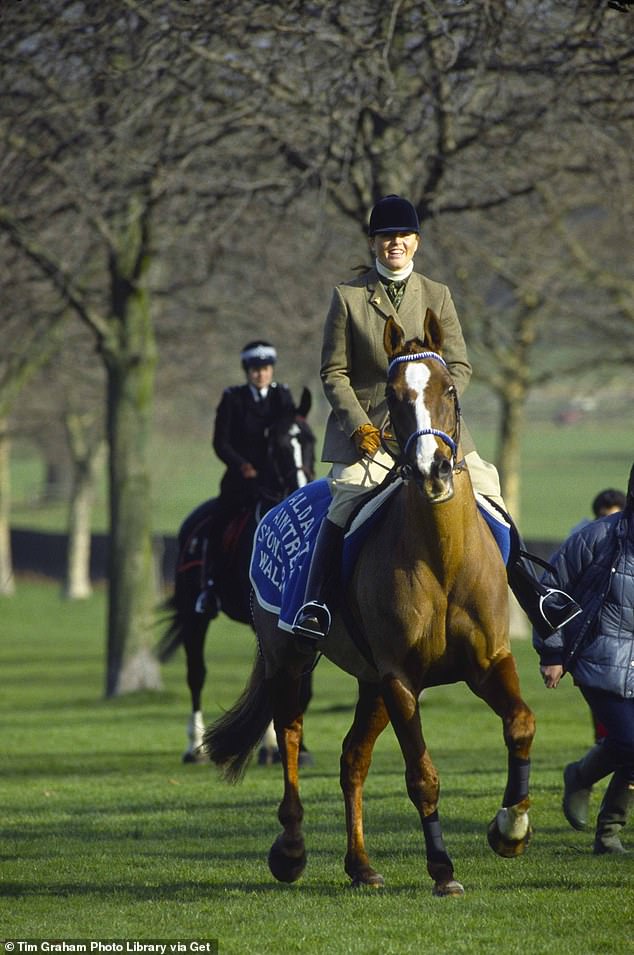 A keen rider herself, Prince Andrew’s ex-wife is a judge on the panel for upcoming Fox show Dancing With Horses – and former ITV commissioner Claudia Rosencrantz has claimed she was ‘wonderful’ to work with. Pictured in 2003 riding the world famous race horse Aldaniti in Windsor Great Park as part of a charity event

But it was worth it, she added, claiming seeing it has meant she can ‘die happy’.

The Covid-19 pandemic has slowed talks about the show being commissioned, however it has the support of Fox reality chief Rob Wade and Claudia is confident it will go ahead – giving the Duchess a big platform on international television.

Fergie is no stranger to the small screen; she has made cameo appearances in Friends and British sitcom The Vicar of Dibley.

She and Prince Andrew married in July 1986 in Westminster Abbey, before going on to split six years later and divorcing in 1996. 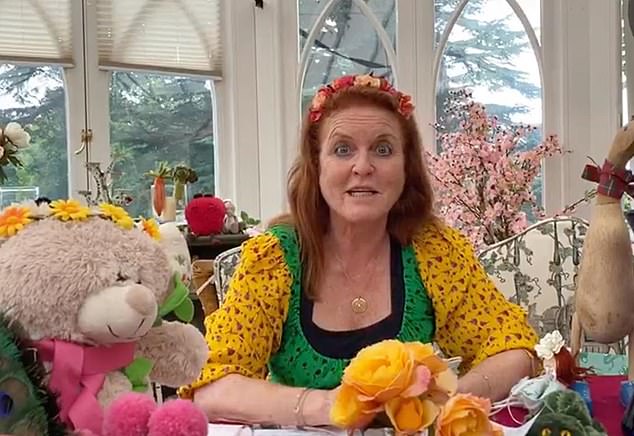 The couple still live together in an unusual domestic arrangement at Royal Lodge in Windsor, and have never dismissed rumours they may remarry.

The Duke and Duchess have stayed ‘best friends’ for their two daughters Princess Eugenie, 30, and Princess Beatrice, 31, who earlier this month married fiance Edoardo Mapelli Mozzi in secret, and spent lockdown together.

Beatrice’s wedding was initially due to take place on May 29, but had to be postponed due to the coronavirus pandemic.

She eventually decided to have an intimate ceremony in front of 20 loved ones, which included her mother Sarah, father Prince Andrew, grandmother the Queen and grandfather the Duke of Edinburgh. 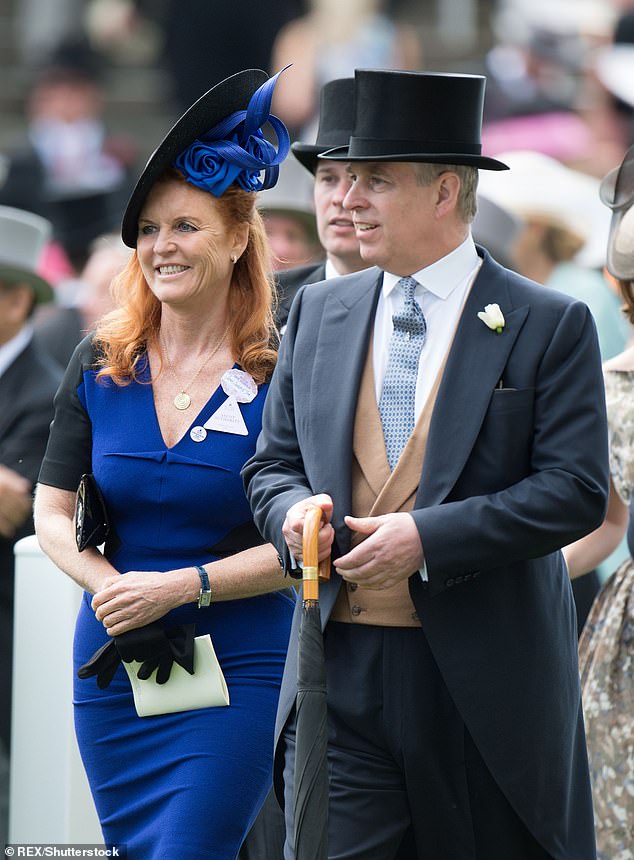 The Duke and Duchess have stayed ‘best friends’ for their two daughters Princess Eugenie, 30, and Princess Beatrice, 31. Pictured together at Ascot in 2015

Royal expert Jennie Bond said it was a ‘sign of Sarah’s unwavering loyalty to Prince Andrew’ that she stayed out of the pictures released to the public.

Earlier this year, royal expert Robert Jobson told FEMAIL that Fergie and Andrew rely on one another for support. Prince Andrew is currently embroiled in scandal over his association with paedophile Jeffrey Epstein.

Speaking about their close connection, he explained: ‘Sarah has been a rock for Andrew at this time.

‘She is his number one supporter and at this tricky time for him she has been somebody he could turn to.

‘They have remained very good friends whilst they raise their children and her continued support of her ex husband shows what a mature relationship and good appreciation of each other they have.’