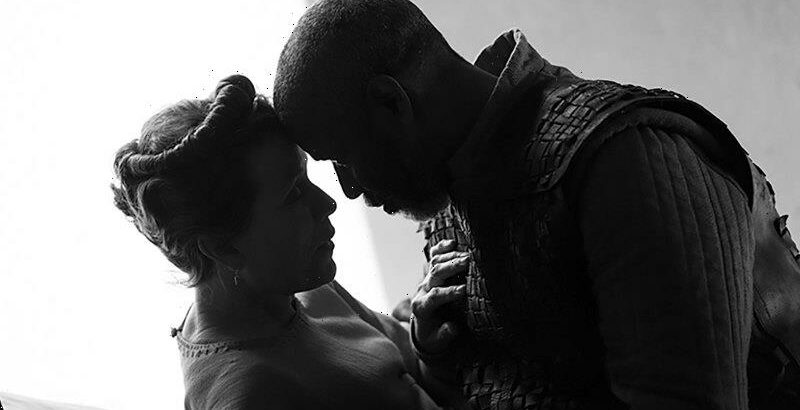 In Joel and Ethan Coen’s Inside Llewyn Davis, Oscar Isaac’s folk musician is trying to make it on his own, without his longtime partner. He travels to Chicago to audition for Bud Grossman, who gives the damning judgment: People need time to get to know you, he says, “buy you as a solo act”.

The Tragedy of Macbeth, Joel Coen’s first time directing without his brother, is going much better for him than it did for Llewyn.

An intoxicatingly expressionist Shakespeare adaptation dense in fog and shadow, Coen’s Macbeth is a solo debut from a filmmaker whose visual virtuosity has never been so starkly drawn in sound and fury. The movie has been hailed as one of the finest film Macbeths – a legacy including Orson Welles’ powerhouse interpretation and Akira Kurosawa’s feverishly atmospheric Throne of Blood – and an unexpected detour from a filmmaking life previously always defined by brotherhood. 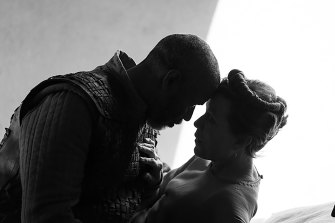 Denzel Washington, left, and Frances McDormand in The Tragedy of Macbeth. Credit:Alison Rosa/A24/Apple TV Plus

“I spent 40 years looking over at Ethan after each shot or looking at him if there was a problem. And, so, I missed him because that wasn’t there,” Coen said in a recent interview. “On the other hand, Fran was there as a producer bringing a different skill set that was in some ways absent from things we’d done earlier – especially in the context of this particular movie because of her experience in the theatre.”

The Tragedy of Macbeth stars Denzel Washington as Macbeth and Francis McDormand as Lady Macbeth. The project was driven partly by McDormand, who had longed to do the play with her husband directing, possibly on the stage. Coen eventually relented but he could only imagine it as a film – stripped down and stylised, abstracted in black and white and composed in a nearly square academy-ratio frame.

“The ambition was to do it very much as a movie in terms of embracing what the medium gives you stylistically and psychologically, and formally, but trying not to lose the essence of the play-ness of the piece of literature,” Coen says. “From the very beginning, we weren’t interested in doing a realistic version of the play. We weren’t interested in a rent-a-castle version.”

As much as the film is a departure for Coen, The Tragedy of Macbeth isn’t really a solo act. Along with working with actors such as McDormand, Washington and Kathryn Hunter (a stunning witch), the film was built through collaborations with cinematographer Bruno Delbonnel and production designer Stefan Dechant. 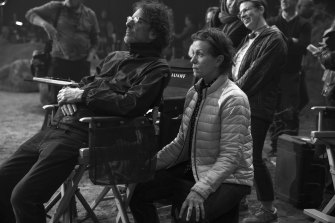 Joel Coen and Frances McDormand on set.Credit:Alison Rosa/A24/Apple TV Plus

Coen and Delbonnel – who shot Inside Llewyn Davis and the Coens’ most recent film, The Ballad of Buster Scruggs – first met almost three years ago, spending a week in a Swiss hotel going over ideas and references. In that conversation and others, they grasped at things like Edward Gordon Craig’s stylised early 20th-century stage design, Carl Dryer’s The Passion of Joan of Arc, Hiroshi Sugimoto’s chiaroscuro photographs and Charles Laughton’s The Night of the Hunter.

Some of the intense conversation that Coen might normally have exchanged with his brother, he had with Delbonnel, poring over sketches and taking contemplative cigarette breaks. Their connection, Delbonnel says, is in questioning everything.

“Joel and Ethan were always questioning whether it was the right way to do something. There is no right way but the right way for the movie,” says Delbonnel. “We both think Kurosawa was a genius.”

As much as the hurly-burly of the Coen brothers’ movies might seem distant from Shakespearean tragedy, their films are crowded with schemers seized by misguided ambitions – just usually more farcical ones. It’s not a terribly far leap from Fargo, where foul was also fair, to Macbeth, or even from McDormand’s opportunistic personal trainer Linda Litzke in Burn After Reading, to Lady Macbeth.

“There are echoes of things we’ve done in the past in this play,” Coen says. “One of the reasons I’ve always loved the play is how Shakespeare anticipated or prefigured these tropes of 20th century crime fiction, this idea of a couple plotting a murder. While they’re not comically hapless or characters we’ve explored in that context in other movies, they nevertheless lose control of the situation.”

Coen’s Macbeth comes from a more mature perspective than is typical to the Scottish play. McDormand and Washington are both in their 60s; their Macbeths are making a last stab at the throne. There are parallels for the filmmakers, too.

“We’ve been around for a while and we have ideas,” says Delbonnel. “There are things we like, things we don’t like. And that’s it.”

Coen grants his own ambition has lessened; he’s grown more prudent in what he’s willing to make. His nearly annual output with Ethan – they made No Country for Old Men, Burn After Reading, A Serious Man and True Grit in a four-year span – now seems “a little insane” to him. The process of shooting Macbeth, which was shut down two-thirds of the way through due to the pandemic, is also not something he cares to repeat.

“As you get older, you get a lot more particular,” says Coen, laughing. “It’s a different relationship to work. It’s more relaxed, in a good way.”

For Coen, less is increasingly more, particularly in the minimalistic The Tragedy of Macbeth. He and Delbonnel storyboarded heavily to find the right level of abstraction. Coen didn’t want a castle but “the idea of a castle”, says Dechant.

Realism has never been the Coens’ style – Joel quotes Hitchcock: “My movies aren’t a slice of life. They’re a slice of cake” – but in Macbeth, he pushed further into a more heightened, theatrical movie realm. One setting was invented: a startling, dreamlike crossroads — fatalism in Coen-land distilled down to a fork-in-the-road that’s every bit as serious as Anton Chigurh’s coin flip in No Country.

On sparse soundstages, Dechant built sets shaped to the light, crafting spaces out of the characters’ psychology.

Coen doesn’t shut the door on he and Ethan working together again.

“Who knows what will happen in the future?” he says. “With Ethan and I, when we started off working, we never said for how long or is this a permanent thing. We don’t interrogate each other’s decisions in that respect.”

But it’s also clear that their riffing process – the constant refining, considering and questioning – is one that still excites and consumes Coen, even if it’s with other collaborators.

“Our process was never really prescribed,” says Coen. “It was never ‘You’re doing this and I’m doing that.’ It was always: We’re both doing everything and whoever’s closest to the person asking the question answers the question. That’s essentially what directing a movie is: answering a lot of questions.” AP

The Tragedy of Macbeth streams on Apple TV from December 26