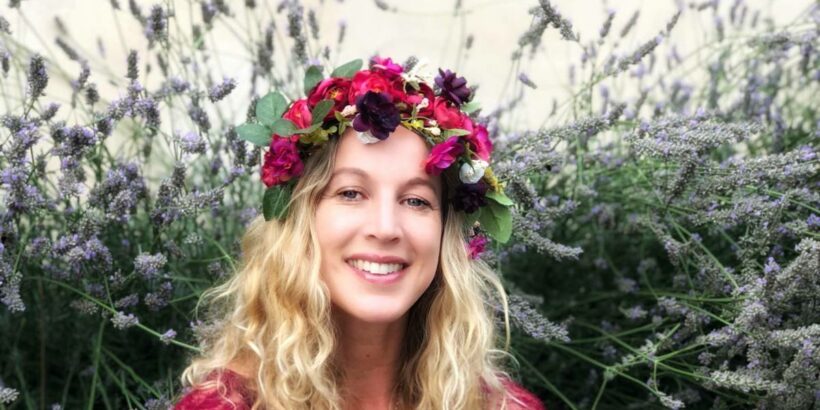 On the cusp of the autumnal equinox, Joanna Wane gets all woo-woo exploring the ancient art of forest bathing.

Years ago, I drove out west on the longest night of winter to take part in a solstice ceremony at Te Henga/Bethells Beach.

It was wild and witchy as the surf roared and sparks whirled around a bonfire lit inside the sea cave at the south corner of the beach. Symbolically, we each cast a tribute into the flames, farewelling the darkness and looking ahead to the light of spring — then decamped hurriedly when a rogue high tide surged in.

So I’m not averse to a little ritual communing with nature. Talking to trees, however, is a stretch even for me. “How does a tree communicate?” muses Hannah McQuilkan, one of only a handful of certified forest therapy guides in New Zealand. “It could be through the sound it makes. It could be the feeling of the bark or the thoughts that pop into your head when you’re leaning next to it. I’ve got a special tree at Karekare that’s quite a close friend of mine.”

I’d stumbled across McQuilkan and her Tree Mystic website after spotting a post online about an Autumn Equinox Forest Bathing Immersion she’s holding at the Auckland Domain later this month.

A property manager by day, she moonlights on a much more spiritual sphere, from energy healing to aromatherapy massage. Pre-Covid, she was taking tourists on forest therapy walks two or three times a week.

Kiwis are a more difficult sell, she says, because most of us like to think we’re connecting with nature all the time, even though we usually don’t take any notice of it at all.

I meet McQuilkan in early-evening sunshine by the band rotunda in the domain, where I find her sitting barefoot on the grass, resting her back against a tree. All around us, the leaves are starting to turn and, after the humid swamp of summer, the breeze has a cool edge. “There’s a sense of something shifting,” she says. “It’s beautiful being in the forest at this time and noticing the change.”

We settle down on a carpet of pine needles, at a spot where she often begins her tree walks with an “immersive meditation” and ends with a tea ceremony, using wild plants such as kawakawa she’s collected along the way.

Let’s cut to the chase, I say, as I take off my shoes. On the woo-woo spectrum, where does she sit? “Well,” she replies, “I put ‘woo-woo as’ on my Tinder profile.”

In the early hours of Monday morning, the sun will be exactly above the equator. That alignment, which happens twice each year, means day and night are equal in length. The autumnal equinox was traditionally a time to honour the harvest (last night’s “harvest moon” is named for the extra few hours of light the last full moon of the season gave farmers to bring in their crops).

McQuilkan, who has Irish and Cornish heritage, holds small gatherings throughout the year to celebrate old Celtic festivals that once bound communities far more closely to the natural world. Beltane, “which is all about tree spirits”, marks the beginning of spring. Samhain, which falls a couple of weeks after Easter this year, is the origin story of what is now Halloween.

Researching and reviving those lost cultural practices has been a powerful experience for McQuilkan, creating a tangible link back to her ancestral roots in Europe and the people who lived there thousands of years ago. “I’ve always had a strong connection to Glastonbury,” she says, with a laugh. “I wondered if it was just because I like crystals, but it turns out we have ancestors who came from there.”

Forest bathing isn’t specifically Celtic but a belief in the spirit world and the mystical power of nature is woven into the mythology of many indigenous cultures.

McQuilkan first heard about today’s more contemporary take on it during a visit to Philadelphia a few years ago and then did her guide training through the US Association of Nature & Forest Therapy.

In the early 1980s, an entire industry evolved in Japan dedicated to what they call “shinrin-yoku”, officially endorsed by the Japanese Government as an antidote to the ills of city living (the average American apparently spends 93 per cent of their time indoors). Some of the more intense programmes include physical health checks and a chat with a therapist.

So, is there really something in it? The benefits of forest bathing have been the subject of much serious research, with university studies showing its potential to reduce blood pressure and lower cortisol levels, among other more ambitious claims. Chemicals released by trees and plants, called phytoncides, have also been found to boost the immune system.

Rather than a walk (or a run) through the park, it’s all about slowing down and being in the moment: the sound and feel of crunchy autumn leaves, the taste of the air, the sensation of wind moving your hair.

Shinrin-yoku expert Dr Qing Li of Tokyo’s Nippon Medical School views it as a form of preventative medicine, at a time where people are more divorced from nature than ever before. “By opening our senses, it bridges the gap between us and the natural world.”
In Auckland Domain, you can hear the sounds of the city and catch a glimpse of the Sky Tower, but McQuilkan loves the trees here. Forest bathing doesn’t have to be about escaping to remote wild spaces, she says, as we walk back to our cars. You might only have to settle more mindfully into your own backyard.

The last shafts of dappled light have dissolved into darkness and for a moment, it does feel as though the world has slowed its furious pace.

I carry that sense of serenity home with me. It lasts right up to the moment I find a piece of chewing gum stuck like concrete to the sole of my bare foot.