Fred Malek, a major Republican fund-raiser and adviser to several presidents who also had a business career that included a stint as president of Marriott Hotels, died on Sunday in Virginia. He was 82.

The American Action Network, a conservative advocacy group that he co-founded, announced the death. Mr. Malek’s family said he died of complications from an infection after hip surgery.

Mr. Malek built up a wide-ranging political, corporate and philanthropic portfolio. It included running Northwest Airlines, serving as a power broker for the Republican Party and becoming a major benefactor to his alma mater, the United States Military Academy at West Point.

He was an owner of the Texas Rangers with George W. Bush and others before Mr. Bush became president. He did not work for Donald J. Trump, but President Trump appointed him chairman of the Woodrow Wilson International Center for Scholars, a research group.

Mr. Malek’s initial foray into presidential politics came during the Nixon administration, when he was deputy under secretary of the Department of Health, Education and Welfare. He was later a driving force behind the Richard Nixon Presidential Library and Museum, raising $25 million for its construction.

Nixon’s daughters, Tricia Nixon Cox and Julie Nixon Eisenhower, said in a statement, “Fred did more for our father’s legacy than anyone else in recent memory.”

But his association with Nixon would leave a stain on his own legacy.

In July 1971, the president was furious when the Bureau of Labor Statistics attributed a drop in the unemployment rate to a statistical quirk rather than to administration policies. According to news accounts as well as the Nixon archives, the president believed that a “Jewish cabal” was trying to sabotage him politically.

And so he instructed Mr. Malek, then the White House personnel chief, to count the number of Jews in the labor bureau.

Mr. Malek refused four times to do so, but finally relented. Guessing who was Jewish based on their last names, he sent the president a letter saying that 13 of 35 top employees were.

He went on to serve as deputy director of the Office of Management and Budget under both Presidents Nixon and Ford. The existence of the letter remained unknown for 17 years.

In 1988, The Washington Post reported on the letter and indicated that it had resulted in the demotions of at least two Jewish officials. Mr. Malek said he had nothing to do with the demotions and was quoted as saying, “I would have found it offensive and morally unacceptable, and I would have refused.”

At the time he was deputy chairman of the Republican National Committee and a high-level adviser to Vice President Bush, who was running for president. He resigned from the committee when the story broke. Slate subsequently reported that a White House memo showed that Mr. Malek did know about the demotions. 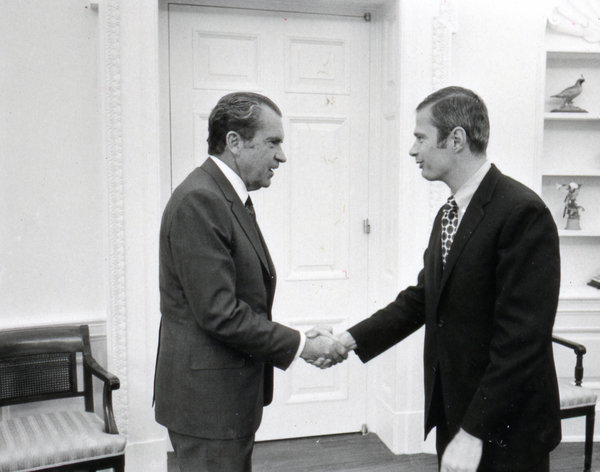 He was remorseful, apologized many times, insisted he was not anti-Semitic and committed himself to fighting anti-Semitism, earning the support of some Jewish leaders. While the matter did not appear to interfere with his business pursuits or political activities, it was often raised by the news media whenever he began a new venture.

Perhaps Mr. Malek’s most prodigious political work was in the service of the Republican Governors Association. From 2008 to this year, he revitalized the organization and helped transform it into a political juggernaut. At his death, he was still its finance chairman.

The party was in a slump in 2008 after Senator John McCain, for whom Mr. Malek had served as national finance chairman, lost the presidential race to Barack Obama.

“He saw that the way to rebuild the Republican Party was not through Washington but by helping to elect Republican governors in the state capitals,” Pete Snyder, a Virginia businessman and friend of Mr. Malek, said in a telephone interview.

Bringing his business savvy to politics, Mr. Malek created an “executive round table,” which offered high-level donors the chance to mingle with V.I.P.s, among other perks. Mr. Snyder, a member of the round table, said the money went toward recruiting and financing candidates for governor across the country.

The association vastly outraised its Democratic counterpart and enjoyed unparalleled success. Between 2008 and 2018, Mr. Malek raised $312 million through the round table and helped elect a total of 84 Republican governors, said David Rexrode, executive director of the governors association.

Frederic Vincent Malek was born on Dec. 22, 1936, in Berwyn, Ill., outside Chicago. His father, Frederick William Malek, who was of Czech descent, drove a beer truck; his mother, Martha (Smicklas) Malek, a homemaker, was of Yugoslavian descent.

He knew from an early age that he wanted to attend West Point, and he did. After graduating in 1959, he served in combat in Vietnam as a Ranger with the Army Special Forces.

While on rest and recuperation in Hawaii, he met Marlene McArthur, whom he married in 1962. She survives him, as do their children, Michelle DuPont Olson and Frederick W. Malek; five grandchildren; a brother, David Malek; and a sister, Marci Anderson.

Mr. Malek received a master of business administration degree from Harvard Business School in 1964 and went to work as a management consultant for McKinsey & Company. He joined the Marriott Corporation in 1975 and rose to president, a position he held for eight years until he left in 1988. During his tenure, and despite a recession, Marriott strongly outperformed its competitor hotel chains.

With a reputation for leveraged buyouts, his financial coups over the years included the acquisition of the Ritz Carlton Hotel Company, Northwest Airlines and Coldwell Banker, now CB Richard Ellis.

In 1989 Mr. Malek became a senior adviser to the Carlyle Group, one of the nation’s most prestigious private equity firms.

He was also a significant donor to West Point, where his legacy includes the Malek Tennis Center; the Malek Soccer Stadium; the O’Meara, Malek, Dawkins, Class of ’59 Strength and Development Center; and the Frederic V. Malek West Point Visitors Center, which overlooks the Hudson River.

He was so devoted to the academy that he named two of his businesses, Thayer Capital and Thayer Lodging Group Inc., after Sylvanus Thayer, known as the “father” of West Point.

Mr. Malek was to be buried at the cemetery on the academy grounds.