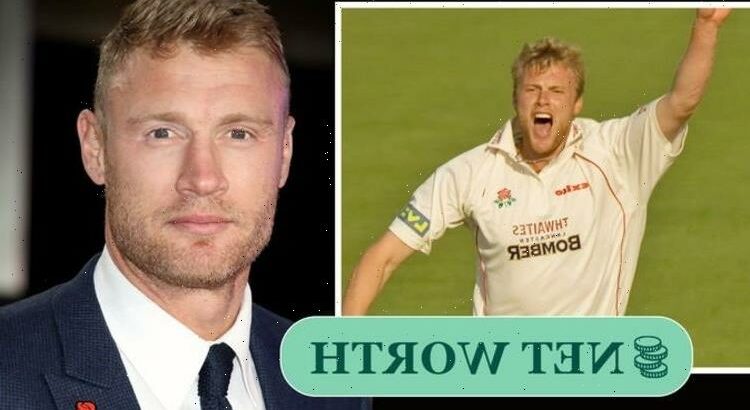 Freddie Flintoff, 43, has been in the limelight since his successful cricket career. The sportsman turned presenter is someone who never stops and his most recent television appearance sees him cycling around the UK with a whole host of celebrities to raise money for Unicef. But what is the Top Gear hosts net worth?

Freddie Flintoff has a net worth of $20million, according to CelebrityNetWorth.com.

That’s equivalent to around £14.5million.

His career started by playing for Lancashire Country Cricket Club, and as a tall, fast bowler, batsman and slip fielder, Flintoff was consistently rated by the ICC as being among the top international all-rounders.

Following his Test match debut in 1998 for England against South Africa at Trent Bridge in Nottinghamshire, he went onto become an integral player for England, serving as both captain and vice-captain of the team.

By 2002, Freddie was a strong cricketer and was often compared to another of England’s greatest cricket players, Ian Botham.

In 2005, Freddie played a Second Test match against Australia and broke Ian’s 1981 record of six sixes in an Ashes Test Match with five in the first innings, and a further four in the second innings.

He scored 141 runs in the game in total.

For his achievements that year, he was awarded BBC Sports Personality of the year 2005 and MCC Spirit of the Cricket Award 2005.

A year later, in the New Year’s Honours List, Freddie was appointed an MBE by the Queen.

However, Freddie suffered regular injuries throughout his international career often due to his heavy frame and bowling action.

On July 15, 2009, Freddie announced his retirement from Test cricket at the end of the Ashes that year but was open to appearing in One Day International and Twenty20 International matches.

A couple of months later, Freddie developed deep vein thrombosis after surgery on his knee, and on September 16, 2010, he announced his retirement from all cricket.

After his retirement, Freddie became a team captain on Sky One game show A League of Their Own, hosted by James Corden.

He has also had a lot of TV films and documentaries made about his life.

In Freddie Flintoff: Hidden Side of Sport, which aired on BBC One in 2012, he talked openly about the severe effects of depression, bulimia, and mental health.

Fans will also remember his appearance on the very first series of I’m a Celebrity…Get Me Out of Here in 2015 where he won and became the ‘King of the Jungle’.

According to therichest.com, Freddie is said to be paid £500,000 per season of the popular car show.