ISTANBUL — President Trump said Monday he’s concerned about reports that a journalist with the Washington Post is missing. Jamal Khashoggi was last seen six days ago, and now Turkish officials are accusing Saudi Arabia of murdering him.

The respected journalist and political dissident apparently needed an official document so he could marry his Turkish fiancée, so we went to the Saudi Arabian consulate in Istanbul. But after entering the building, Khashoggi disappeared and friends say they haven’t heard from him since. 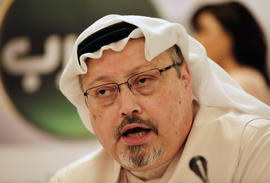 Turkish officials, speaking anonymously, have told journalists they believe Jamal Khashoggi was murdered inside the consulate, but so far they haven’t provided any evidence to back up that claim.

The Saudi government denies it harmed or abducted Khashoggi, even inviting journalists inside the consulate in an attempt to prove he isn’t there.

Khashoggi had spoken out against the Saudi government and the country’s powerful crown prince, Mohammed Bin Salman, condemning the lack of free speech in the ultra-conservative Islamic kingdom.

He had been living in exile in the U.S. since last year because of fears for his safety. A crackdown in Saudi Arabia has led to many other government critics locked up.

On Monday, a small group of Khashoggi’s supporters, including Nobel Peace Prize winner Tawakkol Karman, protested outside the Saudi consulate, demanding to know his whereabouts.

“It is part of their terrorism against their citizens,” Karman said. “Inside Saudi and outside Saudi.”