She’s talking about comedy, but it could also sum up Smart, who has turned in award-worthy performances in three of HBO’s critically acclaimed shows in the past two years. Mare Sheehan’s acerbic Manhattan-drinking mum in Mare of Easttown? That was her. The tough-as-nails FBI agent in Watchmen? Yep, that was her, too. And now Hacks, where she plays a Vegas stand-up legend teetering on the edge of irrelevance who has never met a sequin she didn’t like.

Great is Smart’s baseline, exceptional is the standard. And it’s why the 69-year-old is experiencing what the New Yorker has called a “Jeanaissance” after 40-plus years on TV. 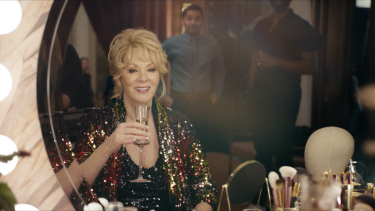 From her big TV break in the 1980s in Designing Women (think fashion design meets Golden Girls meets big shoulder pads and even bigger hair) to Frasier, 24, Fargo and Legion (with an inexplicable pitstop in TV movie William and Catherine: A Royal Romance, in which she played Camilla. It’s the cheekbones), Smart has carved the kind of career that few actors ever achieve, even if it was less “Jean Smart”, more “that woman, you know, her.”

With Hacks, though, which launched on Stan (owned by Nine, the owner of this masthead) this week, she has finally moved into the starring role. In it, Smart’s Vance is the queen of Vegas, with a nightly slot at a glossy casino, a wig for every occasion and a penchant for $10,000 pepper shakers. She throws iPads in the pool and gives her used Rolls Royces to her blackjack dealer. But she’s also on the slide. Jokes about pantyhose and the Challenger explosion? She’s done them all.

What she hasn’t done is challenged herself in a while. Instead, she’s been laying the same old schtick on thick to an audience of devoted fans and those throwing back free drinks in Vegas. 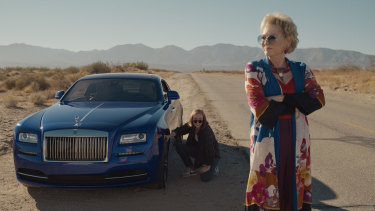 Enter struggling comedy writer Ava (Hannah Einbinder), whose career is flailing after she sent an offensive tweet about a closeted Republican senator. With no prospects and a mortgage to pay, she is sent to work as a joke writer for an unwilling Vance by their agent Jimmy (Paul W. Downs).

What follows is not so much a meeting of the minds but of vastly different takes – Vance’s old-school style has little interest in Ava’s Millennial skits on the inconveniences of voicemail. “That’s not a joke,” Vance snaps.

Hacks is a love letter to women in comedy – a tribute to the great dames Joan Rivers, Phyllis Diller and Elaine Stritch – and the young women who are following in the trail they blazed.

“We made a show that is about how hard it is for women in the arts, and how often they are passed aside and how, so often, mediocre white men are able to have these incredibly long careers,” the show’s co-creator Lucia Aniello told Vanity Fair after Hacks racked up 15 Emmy nominations (Smart is doubling down on Emmys this year – with nominations for Mare of Easttown and Hacks).

And it’s true. Vance has more than an echo of Rivers, who is remembered more for her plastic surgery and shopping channel appearances than the fact she was the first woman, at age 56, to host a late-night talk show in the US. And, as with Vance, she was chided for being too tough. As Rivers told The Hollywood Reporter: “When I say, ‘No, this is wrong,’ people say: ‘See? She is a bitch. She is a c—.’ If I were a man, they’d say: ‘So brilliant. He’s tough, but he’s right.’ Nobody ever says to me, ‘You’re right.’”

For Smart, though, Hacks is a display of an actor at the peak of her powers. She can strip wallpaper with one withering glance and pull you in with another. Until now she has been the supporting actor who elevates everyone around her. Hacks proves this is Jean Smart’s world and we’re just living in it.

Hacks is streaming now on Stan, which is owned by the publisher of this masthead.