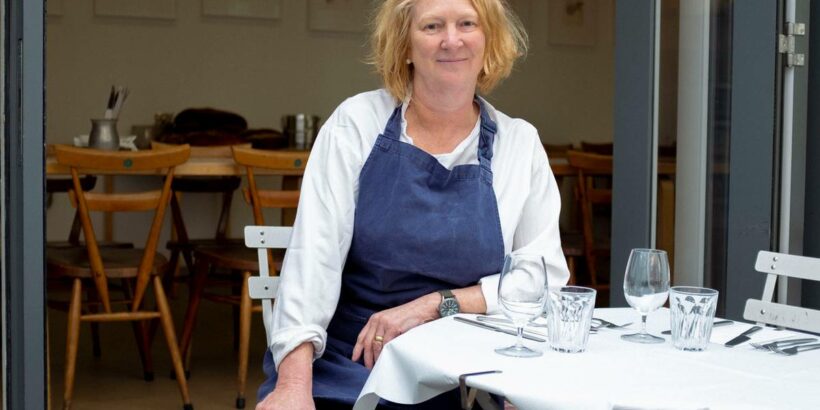 Sitting in the courtyard of Rochelle Canteen, waiting to meet its owner and head chef Margot Henderson, I observe a man trying to exit through the door in the garden wall. He pulls, jiggles and pushes, but is unable to get through. He even tries what looks like a door-release button to his left, to no avail. He catches me watching and I swiftly look at my phone so as to not embarrass him. (I fear the damage is done.) After a moment he is gone and I make a mental note to ask Henderson how to leave when the time comes.

This door has been both a help and hindrance for Rochelle Canteen, one of London’s most acclaimed restaurants, throughout its nearly 20-year history. The kitchen, famous for its delicately arranged, beautifully cooked, deceptively simple English dishes, operates out of a converted bike shed of what was once a school, the surrounding buildings of which now house artist studios and co-working spaces. The garden door – described by the Evening Standard as a “magical portal” in a glowing review – keeps this all hidden from the outside world, resting in a brick wall on an otherwise unassuming street in Shoreditch, East London.

“I quite liked that the door was closed,” Henderson tells me as we chat in Rochelle Canteen’s garden, which feels like an oasis from the usual hubbub of London. “And that actually we were letting you in, and you were our guests.” It restricted passers-by from chancing upon the restaurant, which meant it took Henderson and her business partner Melanie Arnold years to build up a strong clientele – but, on reflection, Henderson likes the edge that gave them. “It was a feeling of, ‘We’re the worst kept secret in London,’ that sort of thing. People loved that.”

The eldest of four siblings, Henderson was born in Lower Hutt to journalist parents. Her childhood was marked by a love of the outdoors: she and her siblings rode horses, swam in the river and barely wore shoes. “I was a hippie from about 10,” she says, blaming Janis Joplin. She learnt to cook, she says, simply out of necessity.

“My mother was a health nut,” she says. “When I was 2, everything white went out the window; it was all brown bread and cider vinegar and honey and all that sort of thing. And when we were young, you’d go to people’s birthdays and there’d be these great spreads with white bread with hundreds and thousands, and incredible cakes and biscuits – New Zealand’s so much about that. And we would just have bran biscuits. We felt really like we were suffering. So for my little brothers’ birthdays, I started baking and doing all that sort of thing, and then I got a job washing up when I was about 12 in Lower Hutt.”

Henderson went to university for “about two seconds”, dropping out to instead work various jobs in Wellington restaurants, eventually training at Java. She moved to London at the age of 20, partly for a boy, and partly for a taste of a harder-and-faster life than New Zealand.

“The rest of the world just seemed so exciting and very far away,” she says. “We just all felt we had to get out. I actually admired my friends who stayed much more. I thought it was harder to stay. People always say, ‘Oh you’re so brave to leave’ – but actually, leaving is quite easy, isn’t it? It’s sort of more exciting, and easier in a way. I love New Zealand, and I miss it, but the years seem to fly by and I don’t live there.”

At first, Henderson says she was just “mucking about” in London, with no aspirations to be a chef – but at the age of 25, she made a New Year’s resolution that she had to push herself and commit to something. Within six months, she was head chef of First Floor in Notting Hill, which specialised in French cuisine. She later opened The French House in Soho with her husband, Fergus Henderson, but when Fergus left to open his now-iconic Farringdon restaurant St John, Henderson teamed up with Arnold to start a catering business, which evolved into Rochelle Canteen.

Looking back, Henderson wishes she’d been a bit more confident when she opened the restaurant. “I think being a mother had sort of chipped away at me a bit, and I lost a lot of my mojo because I’d been out of kitchens,” she says. “When we came here, we weren’t setting ourselves up in a traditional way, so maybe I would have planned it a bit more, maybe got a few more reviewers in and actually cut to the chase a bit quicker. But it happened very organically and it’s lovely how it evolved.”

Shoreditch has moved through several cycles of gentrification in the past two decades, and its rough-around-the-edges reputation has been elbowed aside by shiny apartment blocks and trendy businesses. “When we first got here, neighbours used to throw oranges at us, because we were like the middle classes moving in,” Henderson laughs. “We did a big dinner in here – Mrs Prada was here and all sorts of artists, it was super-glam. And the naughty kids around threw stones through the windows and somebody got hit. There was blood. People were running through the door, saying, ‘It was like this in Notting Hill in the 70s!'”

Today, the restaurant is thriving, packed with a wealthy-looking clientele and frequented by friends and acquaintances of Henderson’s. (A fashionable-looking man interrupts our interview briefly to tell Henderson that the lamb was “to die for, as ever”.) But Henderson is grounded and unfussy, driven by a love of simple, good cooking – an approach she credits to her Kiwi upbringing.

“In some ways, New Zealand doesn’t really have a cuisine,” she says. “I think it’s getting one now, but when I was young, there wasn’t, so you are more saps for everything; you take all sorts of things on.

“It’s a good thing and a bad thing. Because to have your own cuisine, to be Italian …” here, Henderson swoons. “But then I feel for them, too, because they think sausage should only be made in one way, where I feel it can be made in many ways … Even if you live out of your country for many, many years, I’m still very much a New Zealander. It doesn’t go away.”

Henderson’s humility is one of her most recognisably Kiwi attributes, particularly when her extraordinary achievements are taken into consideration. This year, she received an OBE for her contributions to the “culinary world of London”, and was named by British Vogue as one of 25 women shaping 2021.

“We really thought [the OBE] was a con,” she laughs. “And then somebody said, ‘What, the great OBE con, Margot?’ I mean, who’s gonna do that?”

In reality, Henderson sees the accolades as not just hers. “It’s to do with the restaurant world,” she says. “I’ve been around for quite a long time and a lot of people have worked for me and Fergus. Our way of cooking and our catering is all about sharing platters and I think people just know that now. I suppose in my world, it was very nice. I felt very glowy, very warm. It was very sweet of them.”

It hasn’t always been smooth sailing though, especially when a pandemic came knocking on the door of an already precarious industry. “We were absolutely s***ting ourselves,” Henderson says of the first lockdown. “It was terrible. We spent hours trying to plan for what disaster was going to happen. We spent way too much time worrying and plotting and thinking and then the next minute, it would all change anyway. We should have just gone to bed.”

But post-lockdown, business has been booming and Henderson wonders if that’s thanks to people consuming Netflix in isolation: the restaurant features in an episode of the late Anthony Bourdain’s Parts Unknown, as well as the comedy docuseries Somebody Feed Phil. “We’ve done really well actually, it’s been busier and better,” she says. “That’s why I’m concentrating on the restaurant now and not catering. I think Covid has made us realise that maybe you make a little bit less but you focus more, otherwise you’re just running after the money. It feels much better, and it feels a bit more focused.”

Sharing food with friends is the ethos of Henderson’s cooking: a good dinner party just needs “beautiful food, great company, lovely wine”. she says. “It’s the excitement of your friends coming round. I hate it when they let you down and say they’re not coming. I say, ‘I’ve been thinking about you for the last 24 hours!'”

As our interview draws to a close, I wander with Henderson back to the restaurant; she ecstatically shows me her vege patch on the way, in which rhubarb is thriving. We bid farewell, but I realise as I walk away that, in the excitement, I forgot to ask about the door. No matter; once I get there, I notice a rather visible latch. I pull it, exit, and am abruptly returned to the real world.