Every morning the first thing I see when I open my eyes is a very ugly china Buddha. He sits on a bookshelf about two metres from my head, smiling smugly at a joke I'm not in on, and I hate him.

My husband, a freelance filmmaker, brought him home from a job. "Can you believe no one wanted it?" 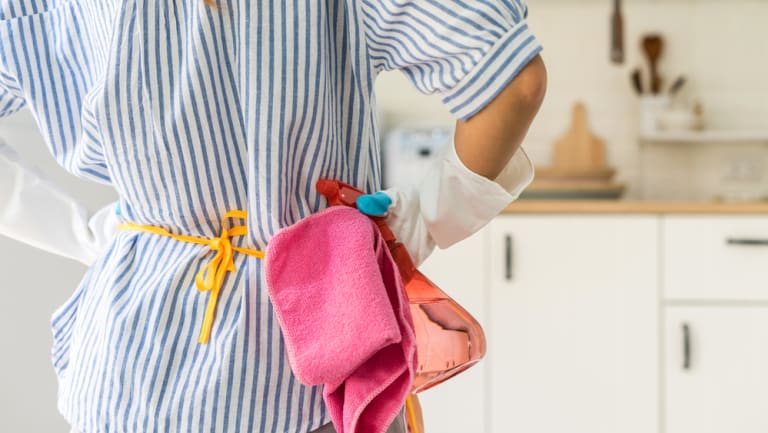 In our house, I wouldnʼt recommend lying down for long, because you will soon be covered in knick-knacks.

"Yeah," I said. "Cos it's hideous." But my husband loves stuff. An electric fan from the '50s that doesn't work. A giant rock that he tells me "looks like it could be an artefact", but almost certainly isn't. A creepy old wheelchair like the kind you'd see in a World War I hospital that I'm sure someone has died in. It all gets jammed into our house, adding to the clutter and chaos that threatens to bury me alive.

We're a normal family with an enormous amount of crap, accumulated over the years and piled on top of itself like sedimentary rock. And it's starting to weigh me down. Things we don't need in our cupboards, under the stairs, in the shed, in our roof, under our beds, a hard-rubbish collection that will never make it to the curb.

My hoarding husband isn't the only problem. Sometimes it's because of gift giving. People feeling obliged to give, so you end up with the most useless objects.

And sometimes I'm just a dickhead with a credit card. Then I end up with a kitchen full of appliances I never use. A bread-maker (I don't eat bread), a George Foreman grill (we have a stove), a snow-cone machine (never opened) and an electric frying pan, like I'm catering for a church buffet in the '80s (the last time I saw one being used). I have so many white platters you'd think I was stockpiling them. And who needs an electric cheese grater? What kind of cheese emergency, or cheesergency, needs cheese that quickly?

I have friends who are minimalists – like properly, not just living without cushions. Their only furniture is a couch, a bed, kitchen table and two chairs. He has only five shirts and two pairs of jeans. She's the same, except she's gone all-out and added two skirts.

They have – get this – two glasses, two coffee cups, two plates, two bowls, a fork, knife and spoon each, and one cooking pot. And that's it.

It does feel a bit weird, especially when I go for dinner and I have to take my own fork. But I'm deeply envious of their discipline. I wish I had the clarity of their sparse existence. There's something very calming about running your eye across a benchtop and seeing only space.

In our house, I wouldn't recommend lying down for long, because you will soon be covered in knick-knacks – picture frames, vases, maybe a halfdead orchid, and always a decorative bowl that starts out as an attempt to style the room, but ends up just a dump bucket for pocket crap, every time.

I have tried to de-clutter. I bought that book that everyone bought about the joy of cleaning or whatever it was. I never read it. It just sat on the pile of other unread books next to my bed.

I started cleaning out my wardrobe, but managed to only chuck two black T-shirts and a pair of high-waisted jeans because you never know when you're going to need three pairs of cargo pants in different colours.

I've attempted to shift our spending to more sustainable practices. I banned plastic toys, but every birthday they invade our house like Chucky.

I've considered a de-clutter company, except there's no way my family would follow its recommendations. Or there's my last resort – faking my own death and starting again, possession-free, in the Bahamas.

What will happen instead is that I'll whinge but never do anything because I'm too busy – my schedule is probably the most cluttered part of my life. And nothing will change. Come to think of it, I bet that's what Buddha is smiling at. He knows he's as safe as houses.