The new CBS drama “God Friended Me” is “not a religious show,” nor is it “preachy,” according to Brandon Micheal Hall, who stars as atheist Miles Finer in the series. “It’s more of a spiritual show,” he told “CBS This Morning.”

“It’s more questioning the ultimate question, which is: is there something greater than ourselves? And if there is, how do we make sure we can make a change before they friend us on Facebook?” Hall said. 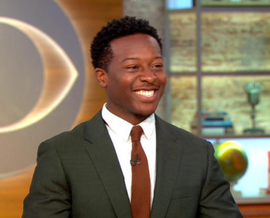 On the show, after receiving a Facebook friend request from the “God” account, Finer’s curiosity leads him to investigate and inadvertently help others along the way.

The theme of spirituality isn’t far from Hall’s own upbringing, where he would travel with his mother who was a pastor in the South.

“I got into acting from being at church all the time,” Hall said. “I would sit and watch the preacher and be rapt in how he would take the ancient text and people would go off and talk about it and come back changed and feeling different. Then when I went to the South Carolina Governor’s School for the Arts and Humanities, I remember I was doing a play, and there was two people in the front row, and they were watching like this, the same way that I was watching the pastor. And that was that moment I was like, I’m doing something, I’m connecting, I’m reaching people. Found a purpose.”

When Hall read the “God Friended Me” script for the first time, he told himself, “I’m terrified. I need to do this.”

He went on to tell his mother he was playing the part of an atheist. After an initial, “Oh, OK,” Hall said she responded, “‘Well, go in and make sure you play it as full and connected as possible.’ Because there are a lot of people out there that don’t believe in a lot of believers. And what’s going to make this show set aside from everything else is the authenticity. And so that’s what we’re really shooting for.”