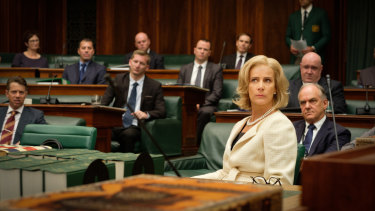 Rachel Griffiths in a scene from Total Control.Credit:ABC

Credit where credit’s due

I felt exhilarated when I saw Rachel Griffiths in her casual nude scene in Total Control. The scene was beautifully done and Griffiths came across as comfortable and confident. If you’ve got it, flaunt it I say.

I agree with Elwyn Bourbon (Letters 24/10), I sometimes wonder why they even bother to invite guests on The Drum panel when they don’t show them the courtesy of listening to what they have to say.

Frayed, a modern-day riches to rags fable, is simultaneously funny and tender. I haven’t laughed so much in ages, as Sammy, the delightful heroine of this sorry tale, lurches from one disaster to the next, helpless in the face of a past from which there’s seemingly no escape. A flawless supporting cast, and some realistic dialogue, make this series one of the best productions of the ABC for a very long time.

What a disappointment Frayed has been. Lots of screaming, too much swearing; my nerves are so frayed I won’t continue watching.

I’ve always been a fan of Julia Zemiro’s Home Delivery programs, but her interview of playwright Nakkiah Lui was a great disappointment. The program was very bland, with no discussion of Nakkiah Lui’s smash-hit play Black is the New White, or of the many challenges the playwright threw out to both black and white Australians in this production. I felt Zemiro hadn’t done her homework, and relied on the tired old script of back to the family house, the school, and the locality where Lui grew up.

Thank you, Ben Lawrence (24/10), for the feature article on Nicola Walker. About 12 months ago I was lucky enough to find, in my local library, a DVD set of the series of Unforgotten that is being shown on the ABC. No spoiler, but the last episode of this series is up there with that of The Tunnel: Vengeance, in terms of great acting and story line. Walker is one of the many brilliant female actors worldwide who is getting the roles they deserve.

“Boris Johnson – charisma wrapped up in a vacuum.” Thanks Virginia Trioli for such accurate reporting.

One of the better detective shows has been relegated to 1.40am on a Sunday morning. Looks like this flower among the endless television weeds is about to be bumped off the air, again. Channel Ten’s Elementary staring Jonny Lee Miller and Lucy Liu is a top-rating show in the US with excellent scripts (“How can we check on something that happened three years ago, unless you have a time machine?”). CBS has renewed the series for a seventh season. We’re now seeing episodes from 2017. Not for too much longer it would seem.

I’ve seen the ads for Trial by Kyle. I try to avoid any visits to courts but am sure a “dance-off” is not a legal strategy.

After being a faithful Gruen viewer since its inception, I am disappointed with how the program now trivialises serious issues. On tonight’s episode Wil Anderson made fun of the issue of the Government’s censorship of the media. This is too serious to treat in such an offhanded way. There are baby wading pools that are deeper than this program.

Journalists should know there is no calendar date called Halloween. If you mean October 31 say October 3.

Please could the ABC explain to Fran Kelly that the rules for a skilled interview are simple: do your homework; ask one question at a time and keep it short; be silent for the answer, and the listener has no interest in the the interviewer’s opinions. The great interviewers were Terry Lane, Phillip Adams, Barrie Cassidy and Michael Parkinson. They all observed the rules.