The gunman who robbed a Melbourne gold buyer of $3.9 million in bullion and cash has pleaded guilty over his role in the heist.

Wearing a surgical mask, goggles and an orange high-visibility top and brandishing a Glock pistol, Karl Kachami walked into the Melbourne Gold Company’s Collins Street office on April 27 and told a worker, "This is a robbery. This is a hold-up." 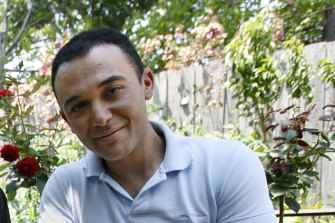 Over the following minutes, Kachami had the worker take him through the offices as he loaded gold bullion and safes onto a trolley and left the staffer with his hands bound with cable ties.

Kachami was arrested two days later and a fortnight later the supposed victim in the hold-up, Daniel Ede, was arrested. Police now allege the two men planned the robbery together.

Kachami, 48, appeared in Melbourne Magistrates Court on Friday to plead guilty to aggravated burglary, theft and firearms offences. He remains on bail after being released from custody in June and is due to appear before the County Court in October for a plea hearing.

Mr Ede, 37, faces charges of theft, perjury and unlawfully possessing a gun and is yet to enter a plea. He remains in custody and is due to return before a magistrate later this month. 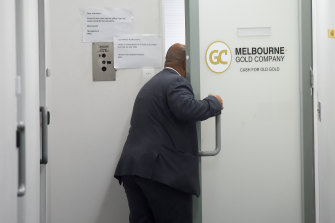 The Melbourne Gold Company in the hours after the robbery.Credit:Justin McManus

Police allege CCTV footage from inside the Melbourne Gold Company shows Mr Ede directing Kachami, through hand signals and eye movements, to take the gun out of his jacket and where to locate small safes. The footage shows Kachami's pistol had no ammunition magazine, police say.

Magistrate Ross Maxted granted bail to Kachami in June when told of the man's health problems, his admissions to police of his involvement and because he led investigators to a family property in the Gippsland town of Dollar, where most of the loot was buried.

Most of the loot had been recovered, the bail application was told, but $333,240 in cash was still missing.

Police and prosecutors have described the crime as audacious, well-planned and Victoria's third most lucrative armed robbery.