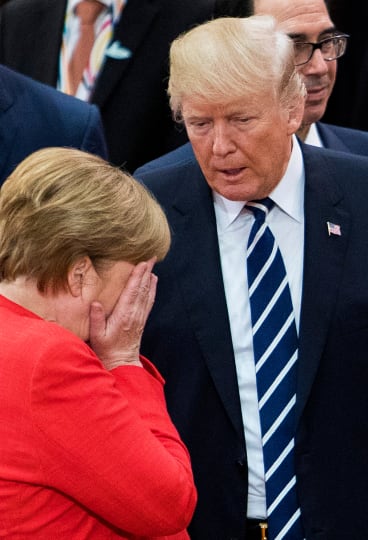 German Chancellor Angela Merkel with U.S. President Donald Trump prior to the first working session on the first day of the G-20 summit in Germany last year.

Once upon a time, long before I lived the freelance life, I worked in an office, your run of the mill 9-5er.

It was in a regular job, with regular hours and I had a regular work nemesis. Steven* sat opposite me and from the moment he started, we didn’t get along. He made it his mission to point out everyone’s mistakes (except his own), signed off emails with “Thanking You Muchly” and drove to work in a car with the number plate 2FAST4U.

This is merely a snapshot, but I sincerely hope you understand the type of person Steven was and why I found excruciating. While I did my best to ignore Steven, his presence became a real problem. Despite enjoying my job, I was unhappy at work – cue the domino effect.

“Happiness can impact on one’s engagement with ones work, subsequently causing a positive impact on one’s productivity and company loyalty,” explains Dr Stephen Teo, Professor of Work and Performance at Edith Cowan University.

But the reverse is also true, the less happy you are at work, the less likely you are to be productive, loyal, or looking to improve performance.  In fact, studies have shown that unhappy workers are 12 per cent less productive – probably because they’re in the kitchen trying to avoid Steven.

To make matters worse, it turns out that office relationships actually play a large part in determining how you feel in the workplace. A Gallup poll recently found that job satisfaction jumps 50 per cent when employees have a close friend at work.

“There's no doubt that having close friends at work is important,” says Sharp

However, the reality of the modern workplace means we’re all bound to have our own Steven-situation at one point.  And you can’t be bailing from your job every time someone gets under your skin.

“The majority of people are working in big companies and that means there's a high chance you won’t get along with everyone,” says Dr Sharp.

So how can you survive the Steven’s of this world without becoming the kind of employee who spends their days googling app ideas in the hope they might strike it rich?

I convinced Professor Teo and Dr Sharp to share their tips on the best ways to neutralise your work nemesis – goodbye rage, hello peace and tranquillity.

Tact over temper: Don’t let emotion dictate your responseWhen Steven would have loud and obnoxious conversations on his Bluetooth headset I was always tempted to remove it from his ear, place it in under my foot and go full-Michael Flatley. But it turns out that short-term gain may lead to long-term pain.

“Anger is rarely a helpful emotion when it comes to the workplace because it just puts you in the weaker position,” explains Dr Sharp.

“Instead, stay calm and if appropriate, use humour to nullify the issue, humour can be a great diffuser.”In my defence, I think stomping the Bluetooth would be pretty humorous.

Find positives in differences: Make conflict work for youIt goes without saying that Steven and I were very different people. I was interested in news and current affairs, he thought 9/11 was a conspiracy.However, Professor Teo believes working hard on appreciating the differences can be hugely beneficial.

“Recognising differences could lead to innovation and creativity in the team,” explains Professor Teo.“You don’t have to be their friend, but if you can master appreciating the differences, you’ll find work easier.”

Utilise your lunch breaks: Ditch the deskBy the end of my time working alongside Steven I had become so accustomed to his lunchtime Mi Goreng slurpfest that the sound was almost comforting. Almost.

Even though it made my skin crawl I didn’t remove myself from the situation because I was too busy/lazy/lethargic. Bad idea.

“If the person you clash with at work is frustrating you then start to use your lunch breaks as enforced timeouts,” advises Dr Sharp. “Go to the gym, go for a walk, evidence proves those types of breaks will help you perform better and chances are even a mini-break might alleviate tension with your colleague.”

Pick your battles: Not every fight has to be foughtDuring one memorable staff meeting, Steven was sitting next to me, bouncing his leg up and down, presumably some kind of nervous tic. This resulted in the table moving and my pen rolling onto the ground. Looking back it was absolutely the type of thing I should’ve ignored but after months of mitigating circumstances, I couldn’t help myself.

“Please stop doing that with your leg, it’s driving me insane,” I whispered. To which Steve replied, “Steve does what Steve does buddy, take a chill pill.”

But rising to this occasion was actually to my own detriment, I overreacted and ended up looking petty.“It’s important to let some things slide, you need to find a balance between speaking up when it matters and realising when you’re reacting out of frustration,” says Dr Sharp.

“If it becomes workplace bickering your colleagues are likely to lump you both into the too-hard basket together.”

It seems the key to conquering your hard-to-handle coworker is by using a healthy dose of common sense and a bit of patience.

By the way, Steve, if you’re reading this, everyone hates your number plate.