Now for the pièce de résistance! Harry and Meghan’s completed wedding cake is seen for the first time – featuring 200 lemons and syrup made at the Queen’s Sandringham estate

This is the completed royal wedding cake the new Duke and Duchess of Sussex’s guests will be tucking into at their Windsor Castle reception.

Kensington Palace tweeted a snap of the non-traditional – and spectacularly pretty – bake, created by Californian Claire Ptak and made using 200 Amalfi lemons, 500 eggs, and 10 bottles of elderflower cordial made at the Queen’s Sandringham estate in Norfolk.

In keeping with the bride and groom’s modern approach to their big day, the cake, decorated with three different types of peonies – a favourite flower of Meghan’s – is not a traditional tiered creation, but features layers of different sizes displayed on individual gold plinths of varying heights.

The Palace said in a tweet that the ‘light sponge’ had been ‘uniquely formulated’ for the royal couple. 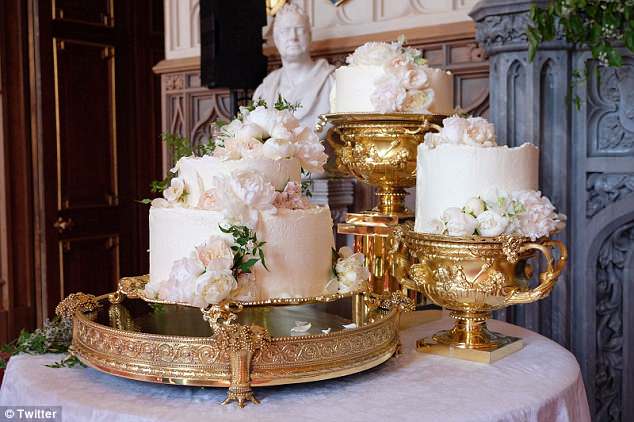 The completed royal wedding cake, created by California baker Claire Ptak, has been revealed for the first time 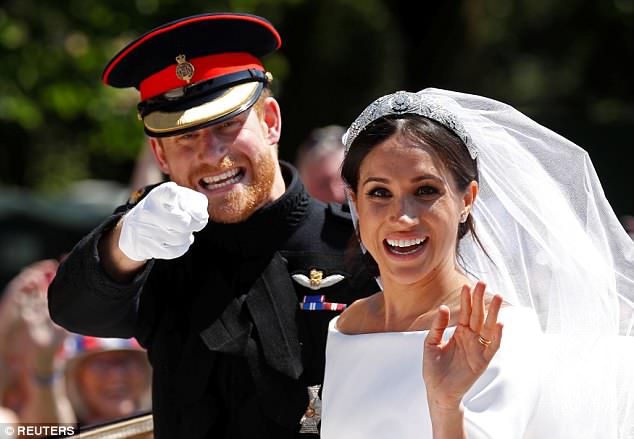 Happy day: The new Duke and Duchess of Sussex are seen waving to the crowds after exchanging vows at St George’s Chapel today

He also said the relatively low-key bake hinted at a relaxed party ahead for guests.

‘The icing is subtle and smooth (much like the material of Meghan’s dress), and has only been decorated by fresh flowers, the same that were part of Meghan’s bouquet and the Chapel’s decoration,’ he said.

‘This adds a unity and consistency that only the best weddings master, and hint at the more relaxed, loose and natural nature of the less formal celebrations to follow.’

Baker Georgia Green, of Georgia’s Cakes, was similarly effusive in her praise for the finished result.

She told FEMAIL: ‘The cake has been styled beautifully.

‘Separating the cake’s tiers is very original and the intricate gold stands add a touch of royalty.

‘Far from traditional icing, the rustic buttercream and flowers gives the cakes a modern twist,’ she said. 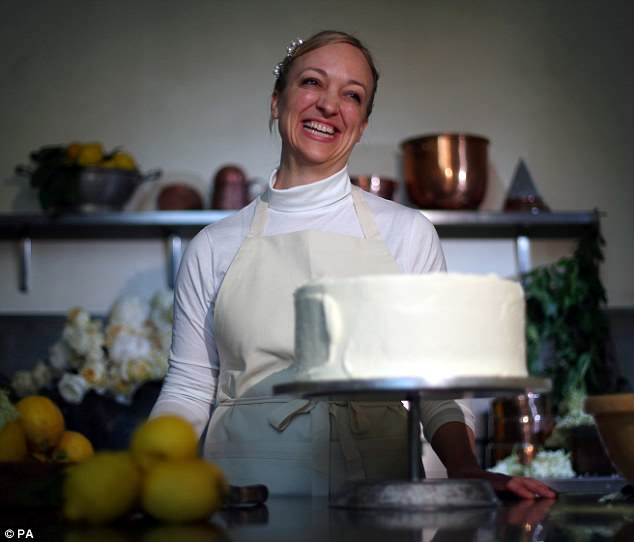 Baker Claire had said ahead of the big reveal that it would be a non-traditional presentation.

The baker, who owns the trendy Violet Bakery in East London, has been working with her team of six bakers full time for five days in the large kitchens of Buckingham Palace.

Slices of the cake will be served to the 600 guests at the lunchtime reception in St George’s Hall. 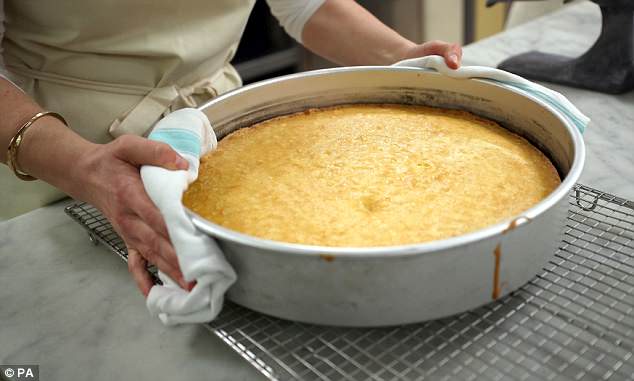 The cake has been made using 200 Amalfi lemons, 500 eggs and 10 bottles of elderflower cordial made from the Queen’s Sandringham estate

Claire said in the days before the wedding: ‘It’s a lemon sponge – a special sponge that I developed just for the couple, and we drizzle the layers with elderflower cordial from the Sandringham estate so it’s really lovely and as local as you can get.

‘We have a lemon curd made from Amalfi lemons which to me have the most delicious flavour. And then we’ve got elderflower swiss meringue buttercream.’

She described the flavour of the cake as being a balance of sweet and tart, combined with ‘ethereal’ elderflower.

‘The buttercream is sweet and the lemon curd is very tart so you get a very lovely thing happening when you take a bite, which is to get all of these flavours and sensations perfectly balanced,’ she added. 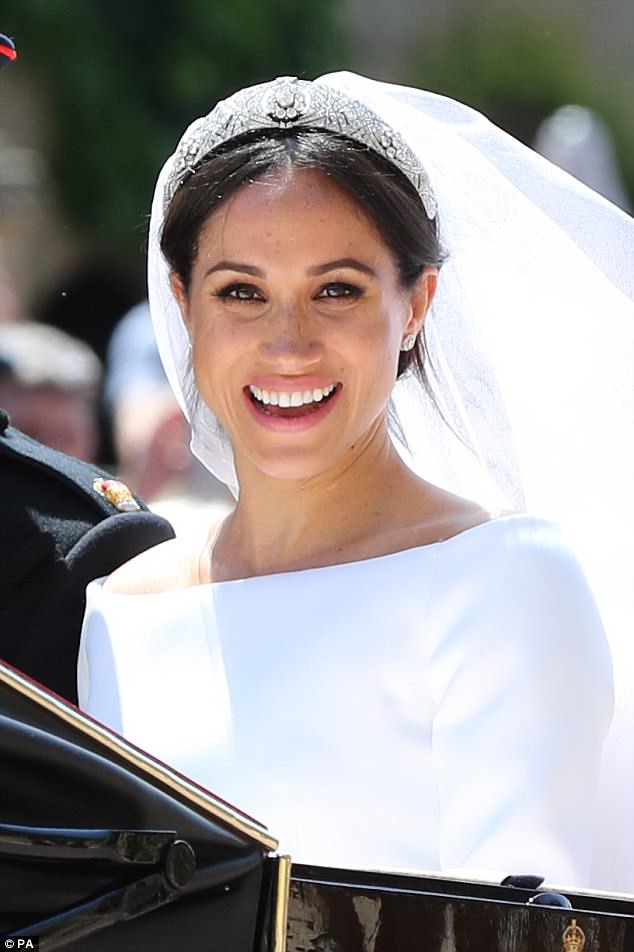 Radiant bride: The new Duchess of Sussex is seen departing St George’s Chapel today after getting married to Prince Harry 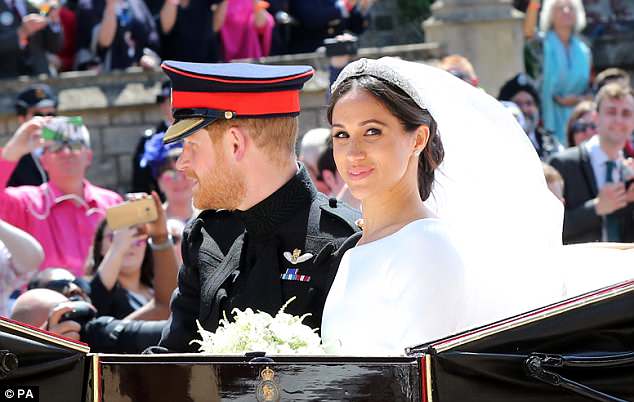 The royal couple, seen during the post-ceremony carriage ride today, are said to have been closely involved in plans for their wedding cake, which is being served to guests at their reception in St George’s Hall

The cake, which is decorated on the outside with a white, elderflower swiss meringue buttercream, is made of layered lemon sponge, drizzled with an elderflower syrup. The layers are sandwiched with buttercream and lemon curd.

Three types of Meghan’s favourite peonies – Madame Claude, Bowl of Cream, and the aptly titled Duchess – in shades of white and cream decorate the cakes, along with four different white and cream roses – Patience, Purity, Jeanne Moreau and Princess Miyuki.

Who is Claire Ptak?

Hailing from San Francisco, she founded Violet Bakery in Hackney in 2010.

She started her business as a market stall on Broadway Market, originally cooking her bakes from home.

All of her cakes are baked with organic flour, sugar, milk and eggs.

She has written four cookbooks.

The flowers will be removed before guests tuck in to the cake, but the slices will be served with edible rose petals.

The baker said Harry and Meghan loved the lemon and elderflower cake after trying a number of different samples.

She said: ‘The elderflower is so quintessentially British to me as a Californian. It’s of this moment. It’s May so they’re just opening this week.

‘It’s a kind of an ethereal, floral flavour which I think is very special, especially for a wedding.’

Claire previously admitted she hadn’t made a back up cake in case of a disaster, saying: ‘It’s cake. It can’t go that wrong. We have enough cake and we don’t want to be wasteful. Anything that is left over, we were going to donate to charity.’

The chef had to call in some of her former workers to have enough staff to work on the cake and keep her bakery open. 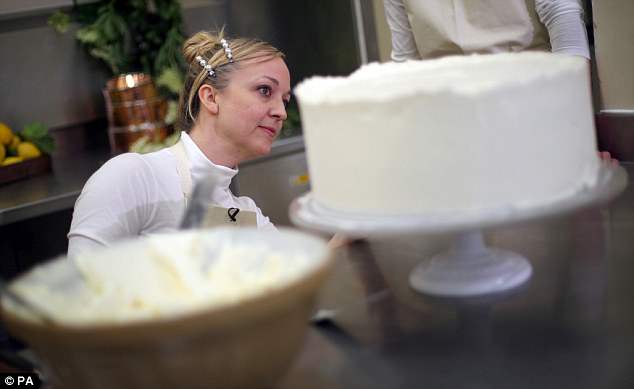 The royal couple are said to have been closely involved with plans for the cake, which was finally unveiled on their wedding day today 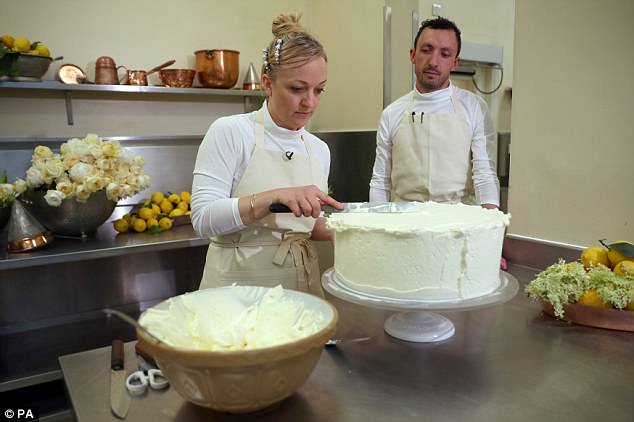 It was finished with a floral decoration of three types of peonies, Meghan’s favourite flowers