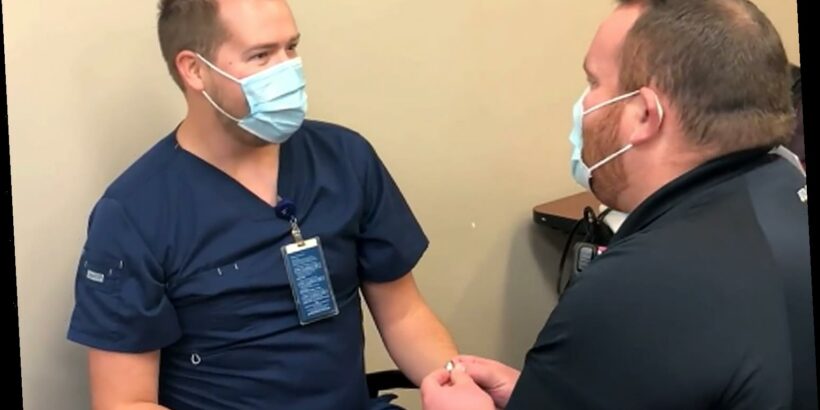 A South Dakota nurse received an unexpected and romantic surprise when he administered the COVID-19 vaccine to his fellow healthcare worker boyfriend last month.

Eric Vanderlee, a registered nurse at Sanford Canton-Inwood Medical Center, vaccinated a very special someone on Dec. 23: his boyfriend of five years, Robbie Vargas-Cortes, a paramedic and EMS supervisor.

But Vanderlee was in the dark about one specific detail about the appointment: Vargas-Cortes, 31, planned to propose to Vanderlee while receiving the vaccine.

"I wanted for it to be a surprise," Vargas-Cortes told CNN.

As Vargas-Cortes rolled up his sleeve to receive the dose, Vanderlee was shocked to see that an engagement ring was taped to his longtime love's arm. Vargas-Cortes then took the ring off of his arm and officially proposed — to which Vanderlee said yes.

"It just kind of dawned on me and I was like, 'Absolutely, of course, yes,'" Vanderlee recalled to CNN. "It was just an amazing moment after I figured it out."

Sanford Health shared a video of the heartfelt proposal on Facebook, writing, "Robby got his vaccine – and an enthusiastic yes from his now fiancé. Congratulations, Eric and Robby!"

Vargas-Cortes — who returned to work just 10 minutes after he proposed — told CNN that he had the ring for three years but wanted to pop the question at the perfect time.

"We're nearing the end of the pandemic. The vaccine is kind of like a new chapter," he said.

Vanderlee, who began volunteering as a COVID-19 vaccine administrator last month, has been affected personally by the pandemic: his previously healthy 86-year old grandfather, Norman Vanderlee, died of COVID in November, CNN reported.

"He was a wonderful man," Vanderlee said. "Even though we had seen COVID as employees, to finally have a family member die was shocking."

Vanderlee also said that being able to administer the vaccine means a lot to him.

"I want to be a part of this end. I feel like I can't pass this up," he told CNN. "It's like a once in a lifetime opportunity to be the one giving the vaccine if I have the chance."

Vanderlee and Vargas-Cortes, who said they are holding off on wedding planning until the pandemic is over, told CNN that they are eternally grateful for the overwhelming support they've received since becoming fiancés.

"South Dakota is a very conservative state. We wouldn't have had the right to marry without the Supreme Court in 2015," said Vargas-Cortes. "So to see such an outpouring of support, especially from our fellow South Dakotans, has been uplifting."