The queen of Halloween. Heidi Klum teased her prosthetic-heavy costume ahead of her annual Halloween party, joking that the look is so intense that it may require medical assistance.

“I’m going to be very claustrophobic. Very claustrophobic,” the America’s Got Talent judge, 49, told Entertainment Tonight on Wednesday, October 19. “Very, very, very claustrophobic, but I don’t want to let my Halloween fans down — or myself. Because it’s an internal challenge with myself every year to come up with something amazing and something unexpected. I feel like I’ve achieved that this year, now I just really hope it works.”

Klum added that she never does a “trial” with her elaborate costumes ahead of the big night, so “it’s either it works or it doesn’t.”

While the supermodel won’t get to try on her look before October 31, she is prepared for all circumstances. “Having so many prosthetics on, in the past — [my emotions went] through waves,” Klum explained. “There’s moments where I’m like, ‘OK, I can do this,’ and then it’s like, ‘Oh, my God, get it off, get it off!’ ‘Cause it’s essentially all stuck on you. It’s not something you can take off like a hat when you don’t feel like it anymore, and take it off — it’s on!”

Trick-or-Treat! The Most Outrageous Celebrity Halloween Costumes of All Time

Klum even added that she will make sure to have an EMT on-site in case she starts “hyperventilating” under all of those layers.

This October will mark the Victoria’s Secret model’s first Halloween party in two years. “Heidi isn’t doing her Halloween party this year due to everything going on [in the world],” a source exclusively told Us Weekly in October 2020 amid the height of the coronavirus pandemic. 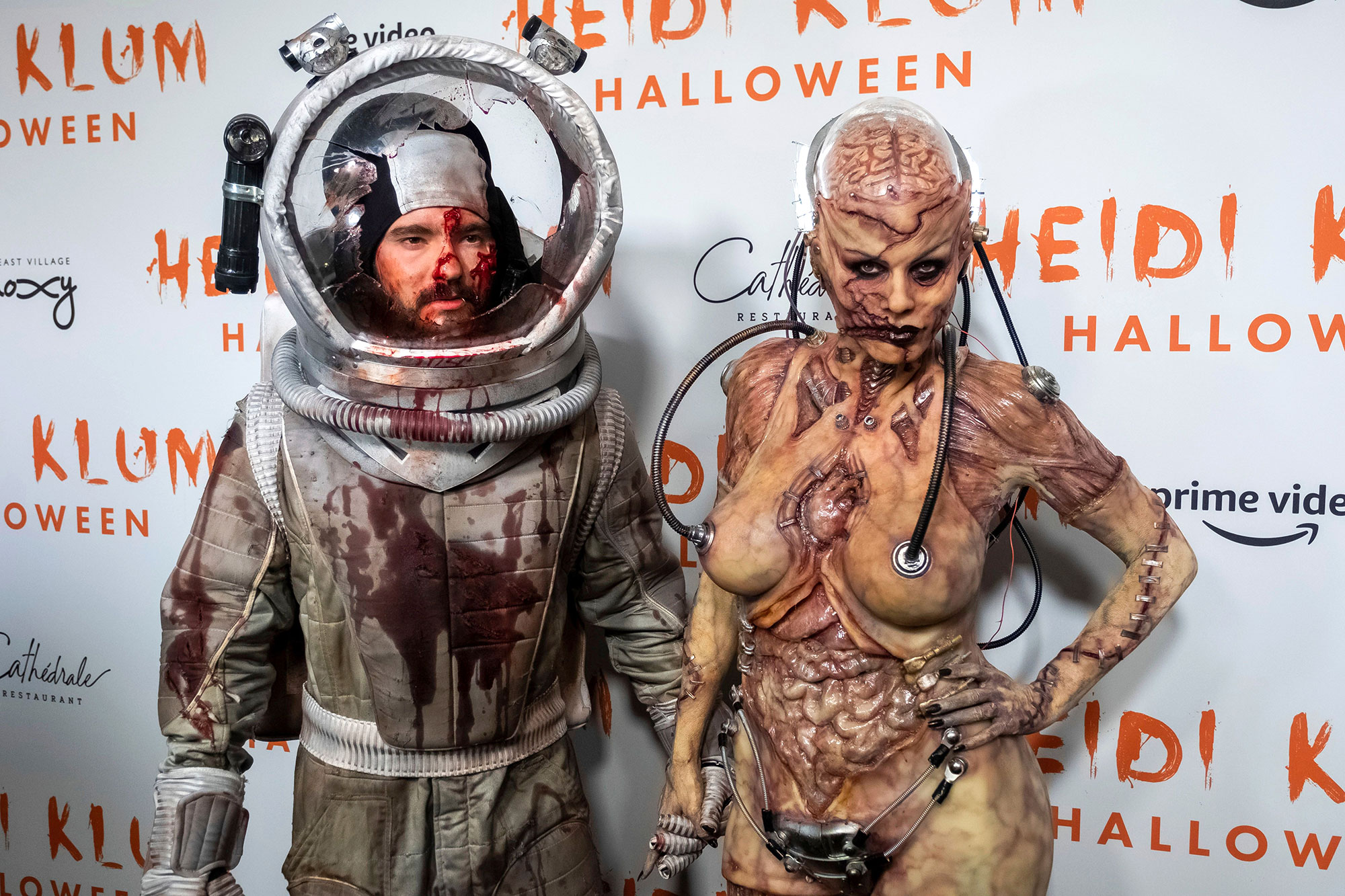 The following year, Klum opted to film a scary short film rather than celebrate at the star-studded bash. “HERE IT IS 🎃 Normally I’d be hosting my annual Halloween party on Sunday night … but this year things are still looking a little different,” the Making the Cut host wrote via Instagram in October 2021. “So instead, my family and I want to be the first to wish you a safe and spooky Halloween weekend. #HeidiHalloween2021.”

In the clip, Klum’s four children — Leni, 18, Henry, 17, Johan, 15, and Lou, 13, whom she shares with ex-husband Seal — played demons who terrorized her and husband Tom Kaulitz as the couple did their best to escape their house of horrors.

The Germany native held her first Halloween party in 2000 and it has become the most over-the-top celebration in Hollywood in the two decades since. “When I moved to America, I immediately fell in love with Halloween and the spookiness of it. All that was missing was a fantastic party. It felt like a real opportunity for me,” Klum told The Hollywood Reporter in 2018, before revealing that at her inaugural party, “the majority of guests were not super dressed.”

She continued: “So, after that, I implemented a ‘no costume-no entry’ rule. We quickly taught people that if you don’t come in a costume, you’re not getting in. The costumes get bigger and better every year. And that’s because guests know they won’t get in unless they bring it.”

Klum’s costumes have also gotten bigger and better over the years, which she explained was to encourage others to go all out on the holiday. “And it’s worked because, over the years, people have become increasingly more outrageous with their costumes,” she told THR. “The party has become almost legendary. It’s epic. I feel like my love for Halloween has made other people fall in love with the holiday, too.”