Heiress, 24, who splashes out on Botox, £1,600 designer bags and regular £100 meals is humbled when she stays with a family-of-seven who survive on £44 a month

A wealthy heiress with a monthly allowance is shocked when she goes to stay with a family of seven who live on benefits.

Sophie, 24, from Cheshire, is a student in dentistry, who receives a £750 monthly allowance and has no rent to pay.

The family receive £1,500 a month in benefits, but are left with just £45 after paying their rent, council tax, utilities bills and groceries.

Sophie, who admits she often spends £100 a pop on dining out, having Botox and fillers, and loves designer bags, has never heard of a food bank was and is shocked to discover that the family have to ask for help to ensure they don’t go hungry. 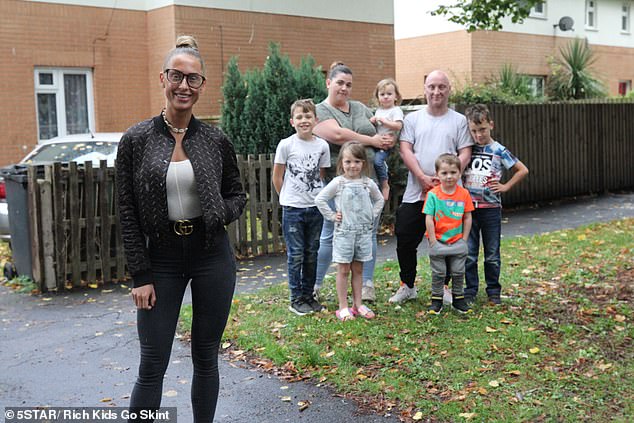 Sophie left), a 24 year old student who lives off her family’s fortune, goes to stay with the Bloors, a skint family of seven from Loughbourough (right) 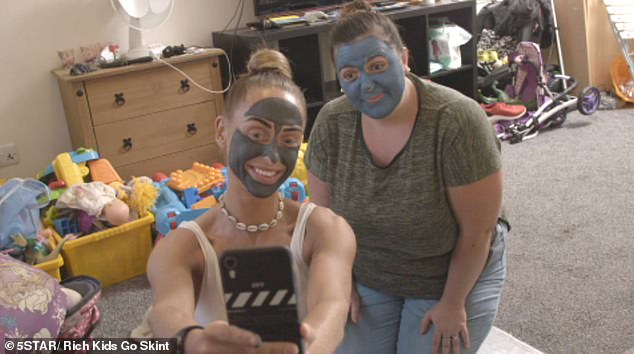 Before she leaves the family, Sophie treats mother-of-five Mandy (right) to a low-cost face mask and some well-deserved me-time

An eye-opening scene sees Pete take Sophie to local food bank The Bridge, where she soon realises that what she spends on a three-course-meals could feed his family for two weeks.

‘Me and Mandy have been here two or three times when we’ve had no money at all, not being able to afford food,’ he tells her.

‘It’s the hardest thing that I’ve ever had to do, to ask someone for help to feed my family, which is what I should be doing,’ Peter says, tearing up.

Sophie seems moved by the father’s testimonial, admitting: ‘I’m not an emotional person but that’s horrible’.

‘Hopefully, fingers crossed, I’ll never had to do it again,’ Pete adds. 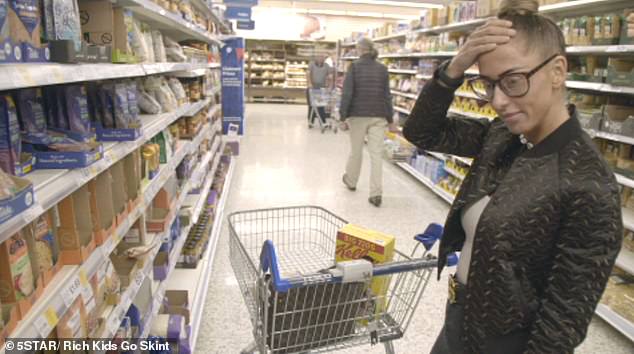 Sophie struggles to find a healthy meal for the children while shopping on a budget, but sets up on rice and chicken 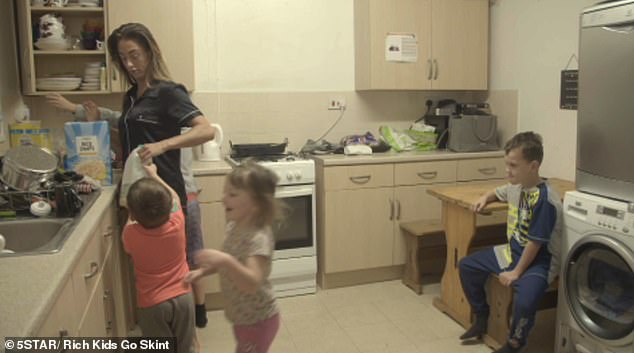 ‘I didn’t know what a food bank was and that’s just ignorance,’ Sophie says, while Pete confesses: ‘I just feel like I’ve let my family down’.

Attempting to comfort him, she replies: ‘At the end of the day, you’re trying to set up a business.’

She adds: ‘It makes me feel a bit guilty spending money when there’s are people like you that are struggling to eat tin food. ‘Thank you, you’ve woken me up a little bit’.

‘That did really hit me hard,’ she later tells the camera.

Pete and Mandy have been together for four years, and have a two-year-old daughter Mia together, as well as raising Mandy’s other children from previous relationships together. 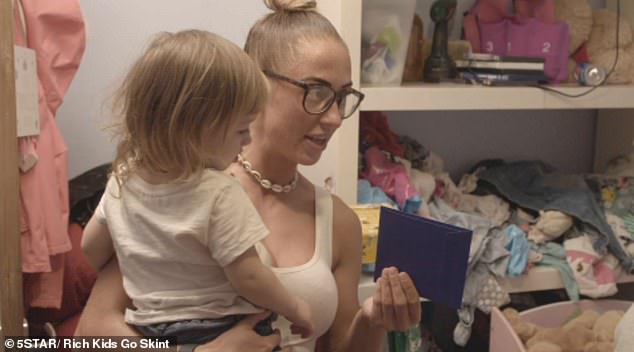 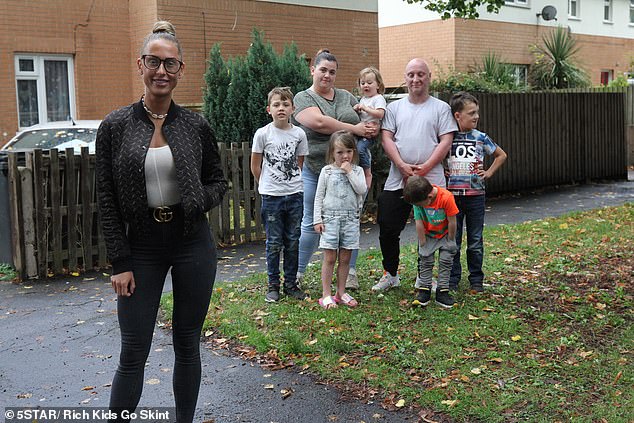 Pete used to work in childcare, but is now trying to set up a football training franchise, however it is taking him time to build his business, and money is getting scarce.

In order to help him further his enterprise, Sophie hands Pete a £50 gift card for a sporting company so he can buy more equipment.

Sophie, who is studying to become a dentist but also runs her own fitness business, explains to Pete that she’s earned £60,000 in the past eight months, and tries to give him business advice. 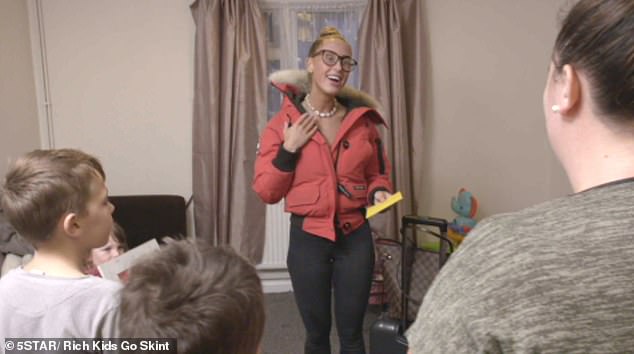 Sophie is very touched by her time spent with the Bloors, and leaves the family in a happy set of mind

Sophie is, from her own admission, ‘vain,’ and spends a lot of her time and money on her appearance.

She’s gone through breast augmentation surgery, which set her back £8,000 and also regularly gets her hair done.

She has lip injections and Botox injections every three months, which sets her back about £200 and £150 for each procedure respectively.

In stark contrast, full-time stay-at-home mother Mandy gets emotional when Sophie asks her about the last time she took care of herself, tearing up, as admitting she can’t remember.

In a sweet scene the two women are seen pampering themselves together, trying out various facemasks. 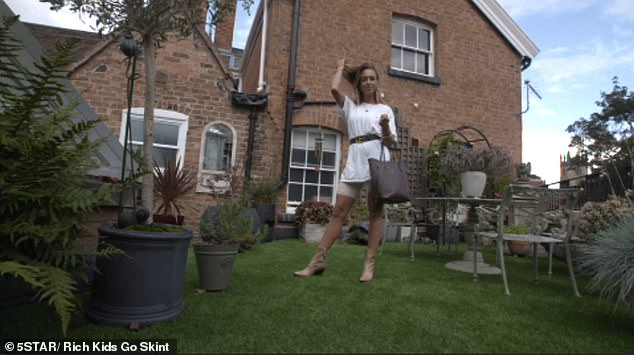 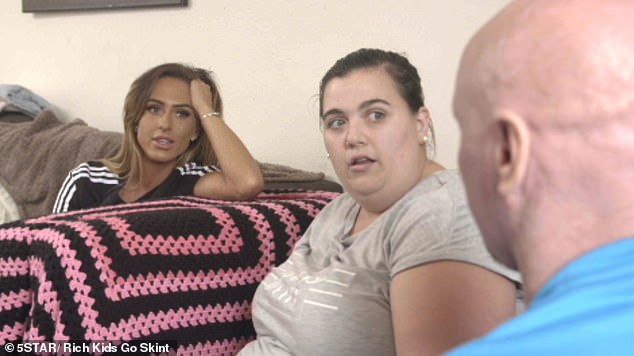 And while Sophie shows the couple how to pamper themselves and set up a business, the Bloors challenge Sophie to live on a budget, tasking her with buying enough food for a dinner for seven on a budget.

This proves difficult for the heiress, but she eventually manages, and even buys a few snacks for the chldren.

At the end of the experience, Sophie is happy with her time with the Bloors, revealing: ‘It really actually did touch my heart’.