Anyone awaking bleary-eyed from a weekend of grog-soaked revelry might well have assumed there had been an overnight coup.

All across the airwaves, whichever way you turned, were what looked like two mildly sinister government agents, wearing dark suits and pale shirts, both carrying that answerable-to-no-one air of officialdom.

Their tone was severe, their message stark. Citizens of England: now listen to us.

Monday morning, 11am, and Sir Patrick Vallance and Chris Whitty were preparing the country for another extended period of enforced hibernation. The dreaded second wave was officially upon us.

Our venue was an unknown location in Downing Street. Grey background, sterile atmosphere. That fusty old briefing room had finally been given the flick. So first wave, dahling. 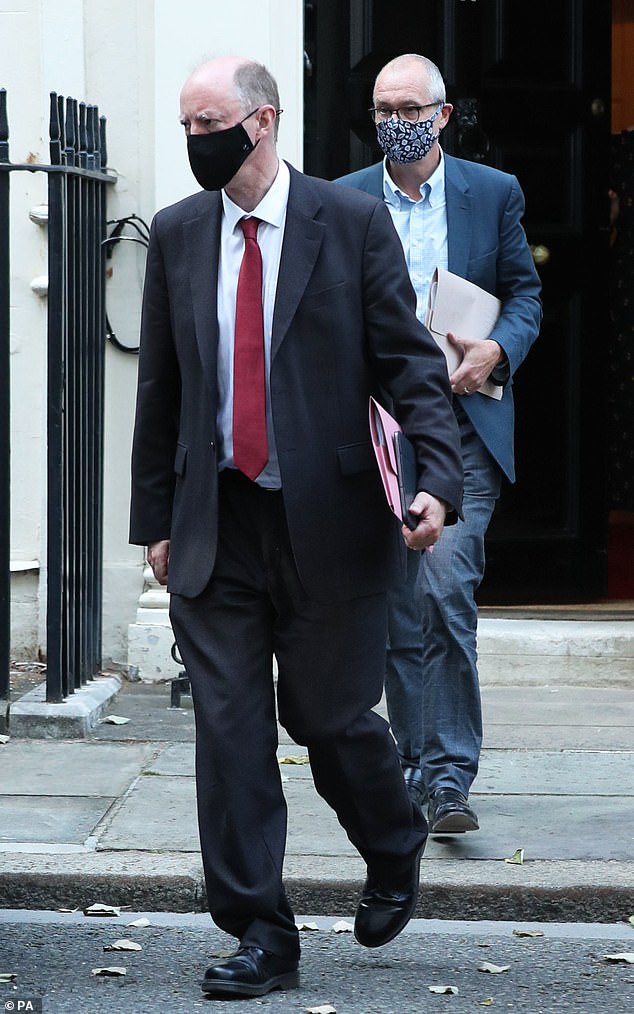 Vallance led the way, as he so often has in this crisis. He’s the more erudite in this odd couple pairing.

The suave Jack Lemmon to Whitty’s gruntier Walter Matthau. That said, he was sporting a slightly aggressive new buzz cut.

Note to Lady Vallance: perhaps set the clippers to a higher notch next time.

He wasted no time getting to his killer slide. This was the bone chiller. Exhibit A to send us all scurrying back beneath the bedclothes.

A graph of coloured squiggles showed how the current infection rate was set to double every seven days.

Vallance’s presentation was clear as a cut-glass decanter: we need to slow the spread. ‘That requires speed,’ he said. ‘It requires action.’

Equally unsettling was his revelation that less than eight per cent of the population was Covid immune. Yikes. I would have assumed it was at least treble that amount.

Sir Patrick, presumably, is not among them. He is one of few members the Prime Minister’s inner circle yet to contract the disease. 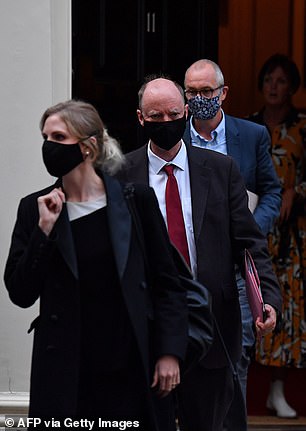 Professor Whitty entered the fray. Uh oh. Optimism flows from Whitty about as freely as blood emerges from stone. He announced the country had turned a corner. ‘In a bad way,’ he warned. He added that the flare up could not have come at a worse time, as temperatures begin to drop. ‘The seasons are against us.’

Whitty’s eyes bobbled in their glue. He has peculiar relations with this disease. He seems to both hate and admire it at the same time.

At the beginning of the crisis, he always seemed quite nonplussed about it. It worries him more and more as time goes on.

He dismissed the idea that this was a milder virus than the one we experienced in the spring. There was a plea for people to take collective responsibility. ‘This is not someone else’s problem,’ he cautioned. ‘This is all our problem.’

I got the feeling that this message was aimed particularly at the young. Getting them to lock down again is going to be a struggle.

If the purpose of this exercise was to scare people out their wits, then I would say mission accomplished.

Whitty, in particular, was not afraid to pile on the prophecies of gloom. ‘If we don’t change course,’ he said, ‘We’re going to find ourselves in a difficult problem.’

We were tossed the odd crumb of comfort.

For starters, we’re far better at treating patients than we had been back in March. New drugs such as dexamethasone would help lower the mortality rate. Whitty also referred to any new restrictions as being a ‘six-month problem’.

‘It’s not indefinite,’ he said. ‘Science will in due course ride to our rescue.’ From old gloomy chops that was doubly reassuring.

Sir Patrick began making some positive noises about a vaccine. He hoped there might be small amounts available by the end of the year. ‘There is a good progress being made,’ he said. A breakthrough next year, however, looked more likely.

In the meantime, the outlook was bleak.

‘We’ve got to control this,’ Sir Patrick insisted. In other words, stand by for more restrictions, more misery and more economic turmoil. It’s going to be a long, cold winter.