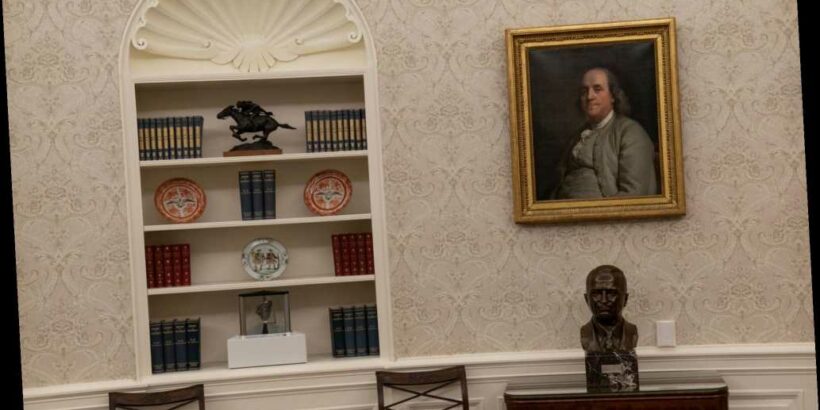 The Resolute Desk is still there. Gone is the red button upon it that summoned one of 12 daily Diet Cokes.

The curtains remain golden. Oh, and it’s still shaped like an oval.

Beyond that, the Oval Office has seen a fairly dramatic transformation in the last 24 hours, as President Joe Biden moved in and Donald Trump moved out.

A portrait of Andrew Jackson, the former U.S. president who kept slaves and signed legislation leading to the Trail of Tears, and whose populism reportedly inspired Trump, has disappeared. In its place: a portrait of Benjamin Franklin.

The Founding Father sits near a bookshelf bearing a moon rock, an intentional pairing The Washington Post says represents Biden’s respect for “science and truth” and the formidable achievements of America’s earlier generations.

Biden’s office told The Washington Post, which got a first look at the Oval Office prior to the president’s arrival Wednesday, that the pairing of Hamilton and Jefferson, who often disagreed with each other, was deliberate.

The paintings represent “how differences of opinion, expressed within the guardrails of the Republic, are essential to democracy,” Biden’s office said.

Biden has also brought back “Avenue in the Rain,” a highly symbolic oil painting from 1917 depicting a rainy Fifth Avenue in New York City lined with American flags. CNN notes the work occupied the office during the Obama and Clinton administrations, and through part of Trump’s term.

Elsewhere, Biden has removed a bust of Winston Churchill, on loan from the United Kingdom, that Trump favored.

Instead, a prominent bust of Latino civil rights leader and labor organizer Cesar Chavez sits prominently behind the Resolute Desk, alongside pictures of Biden’s family.

“We’re happy that the bust is there,” Paul Chavez, Cesar’s son and the president of the Cesar Chavez Foundation, told CNN.

“It represents the hopes and aspirations of an entire community that has been demonized and belittled, and we hope this is the beginning of a new day, a new dawn in which the contributions of all Americans can be cherished and valued.”

The office also features busts of Rosa Parks, Eleanor Roosevelt, the Rev. Martin Luther King Jr., President Harry Truman and Robert F. Kennedy, in addition to a sculpture by Allan Houser of the Chiricahua Apache tribe of a rider on horseback.

One more notable, if kinetic, addition: Biden’s Oval Office will once again feature four-legged companions after Trump broke with a long, weird history of animals in the White House. The president and first lady Jill Biden have two German shepherds, Champ and Major:

Major The Dog Came From An Animal Shelter. Now He’s Headed To The White House.

Adorable Photos Of The Biden Dogs, Champ And Major

This article originally appeared on HuffPost and has been updated.