With the final season of Game of Thrones just days away, there’s been no shortage of themed snacks to help keep you fed while you watch the show’s biggest players in their final chapter. The first watch party of GOT is coming on Sunday, April 14, and Shake Shake has you covered with a specialty burger and drink that’ll make you feel like you’re living in Westeros and right there in the action with Danerys, John Snow, and Sansa Stark. Here’s how to order Shake Shack’s "Game of Thrones" menu (just FYI, you can order in Valyrian if you’re so inclined) so that you and your crew are set with on-theme bites and sips come Sunday.

Starting on Friday, March 12, the burger and shake chain is giving customers a chance to feel like the Mother of Dragons by releasing two specialty items from the new Game of Thrones-themed menu nationwide.

IMHO, Shake Shack can do no wrong in the shakes department, and I can confidently say I fully stan the retailer’s new Dragonglass Shake, which is named for one of the only two substances (along with Valyrian steel) that can kill a White Walker. And, just in case you were wondering, Shake Shack is giving you all the Valyrian phrases you need to make your order like a local.

According to press materials, you can expect a prime example of the Wall to Table movement: "Custard is frozen with packed snow harvested beyond the Wall and hand churned by members of the Night’s Watch. Final prep occurs in Winterfell, where the shake is topped with shards of Dragonglass imported from the caves of Dragonstone." Just in case you were wondering, you can also order a "Zirtom Perzomy Rholitsos" at the register and expect to snag one of these bad boys, and TBH it’s making my not-so-inner nerd so happy. 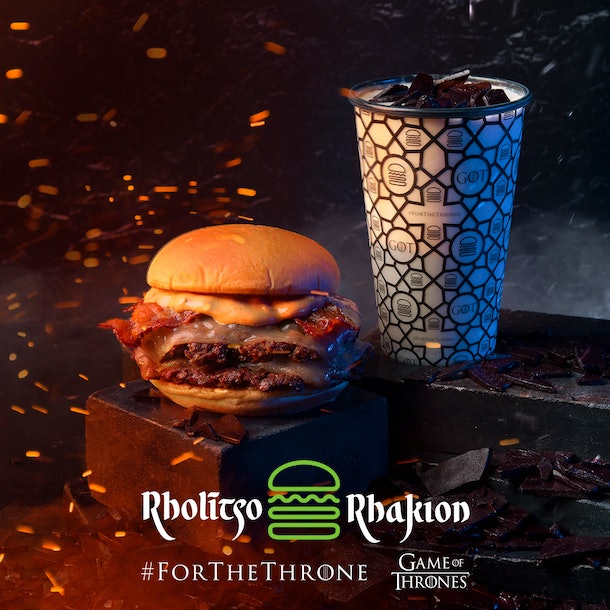 For non-Westeros folk, that basically means that you’ll be getting a shake that’s been made with the company’s trademark minted white chocolate custard, which has then been topped with shards of colored toffee for a crunchy, sweet treat. The Dragonglass Shake will be retailing starting at $6.49, and it’ll be available until May 19 while supplies last at locations nationwide (after all, members of the Night’s Watch have more important things to worry about than churning custard in their spare time).

If you’re looking for a savory accompaniment to your sweet sips, look no further than the Dracarys Burger, which has been "griddled by the fires of Drogon and Rhaegal" for maximum sear.

Per press materials, the double Monterey Jack cheeseburger is "topped with a fiery ShackSauce created from herbs and spices sourced from the conquered cities of Yunhai, Meeren and Astapor. The final touch are slabs of bacon imported from Essos—a Dothraki delicacy. Caution: may be too hot for non-Targaryens." In other words, expect plenty of fire and (sp)ice with this offering, which will turn up the heat with a mixture of scallions, hot sauce, CarolinaReapers and Chipotle chilies, and other herbs, per a Shake Shack rep. The burger will retail for $10.99, and it will be available until April 21 or while supplies last at select locations nationwide. Per press materials, hungry customers can get in on the "Drakaro Parkliapos" at locations in New York, LA, Chicago, Dallas, Houston, DC, Miami, Las Vegas, Denver, Philly and Boston. 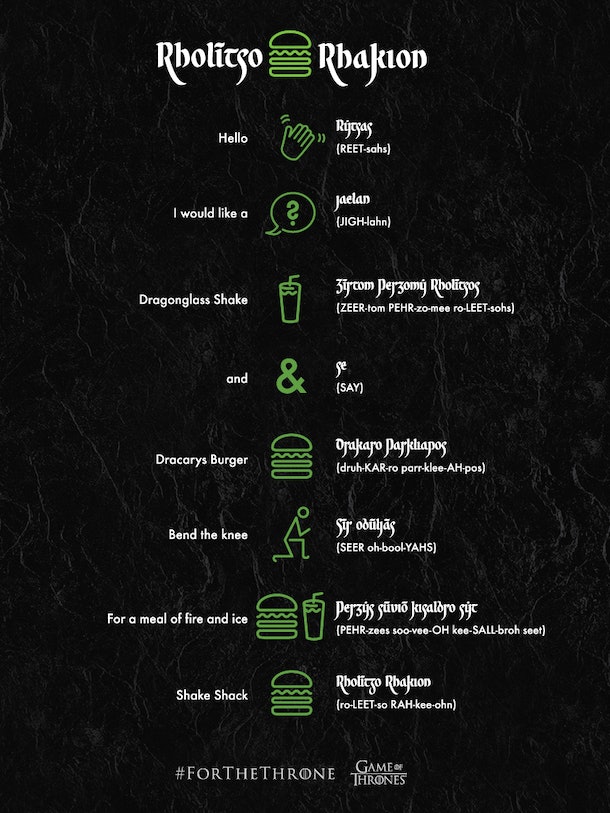 Whether you choose to visit the Dragonstone Throne at the West Village Shake Shack in NYC on Friday, April 12 from 10 a.m. to 11 p.m. and get a photo-op with your themed eats, or you head to a participating Shack anytime before the cut-off dates, there’s never been a tastier time to rule Castle Shack and mark your allegiance with your treat of choice.