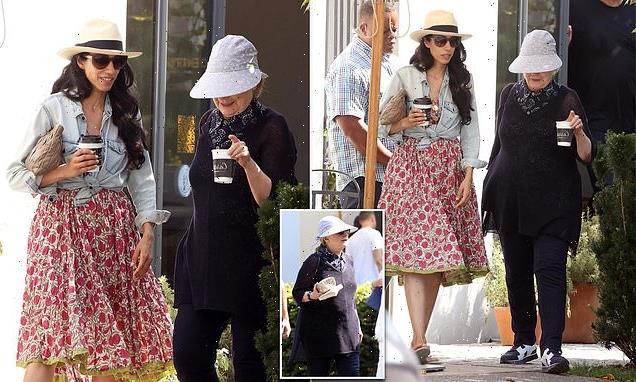 EXCLUSIVE: Lots to discuss! Hillary and Huma prove they’re still joined at the hip during Hamptons coffee date – days before premiere of FX series about Bill Clinton’s affair with Monica Lewinsky and ahead of Abedin’s tell-all memoir about Anthony Weiner

Hillary Clinton and her former aide Huma Abedin are proving that no number of scandals, failed presidential campaigns, and tell-all books can come between their longtime friendship as they reunited this weekend in the Hamptons to enjoy a leisurely lunch.

Clinton, 73, and Abedin, 45, looked like the very best of friends as they joined several companions at Carissa’s The Bakery in East Hampton, where they were seen laughing and chatting over coffees and pastries while soaking up the sunshine at an outdoor table.

The former Secretary of State and her longtime aide looked as though they had nary a care in the world – despite the fact that their outing comes just days before a new crime drama about Bill Clinton’s affair with Monica Lewinsky is due to be released, and two months before Abedin will publish a ‘candid’ tell-all book that will detail her marriage to disgraced ex-Rep Anthony Weiner and her work on Clinton’s failed 2016 bid for the White House.

In exclusive images obtained by DailyMail.com, Clinton was seen smiling and laughing as she caught up with her longtime aide and close friend, having clearly put all thought about the drama series out of her mind. The FX show, Impeachment: American Crime Story, is set to rehash all of the scandalous – and no doubt painful – details of former President Clinton’s affair with Lewinsky, who serves as a producer on the series. 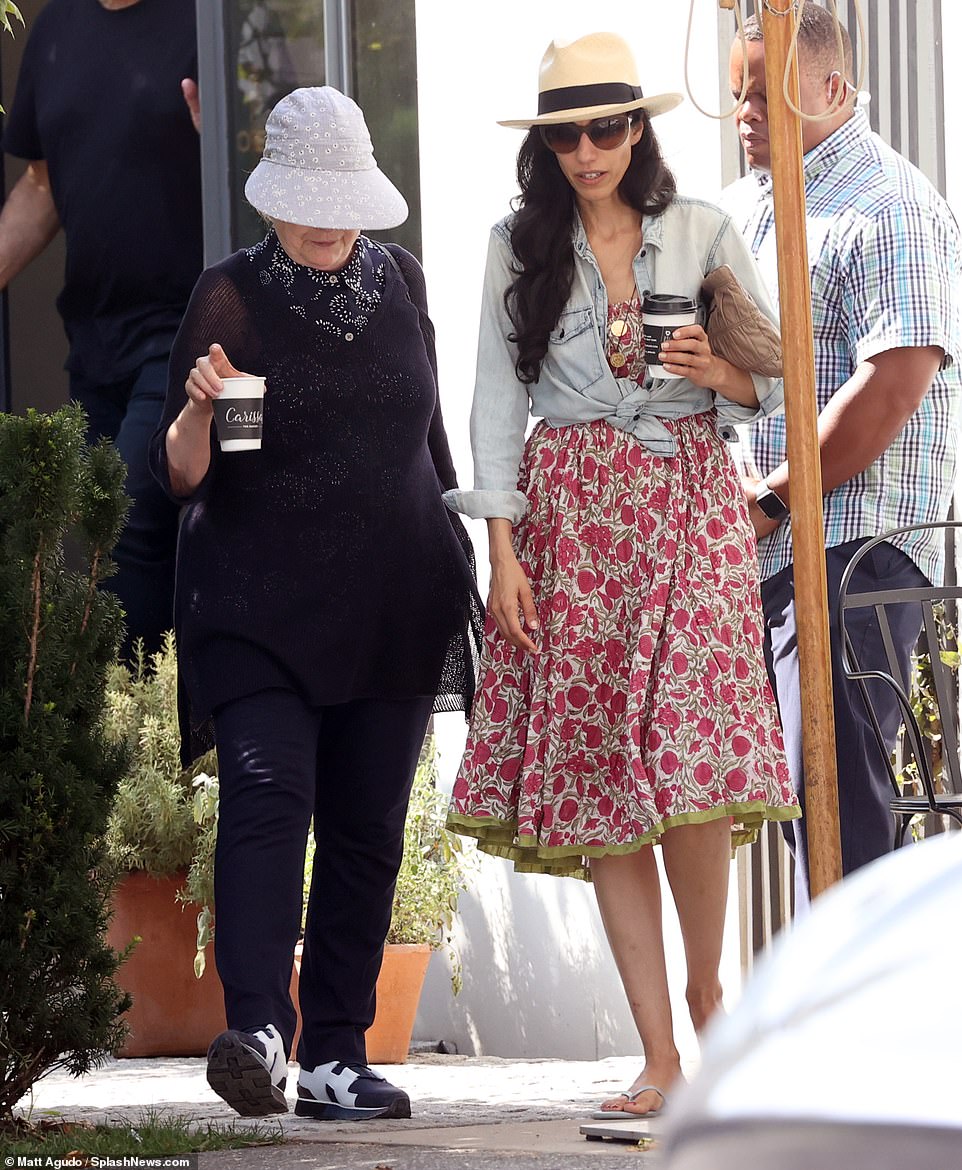 Together again: Hillary Clinton and her longtime aide Huma Abedin proved that they are still very much joined at the hip as they enjoyed lunch together in the Hamptons on Sunday 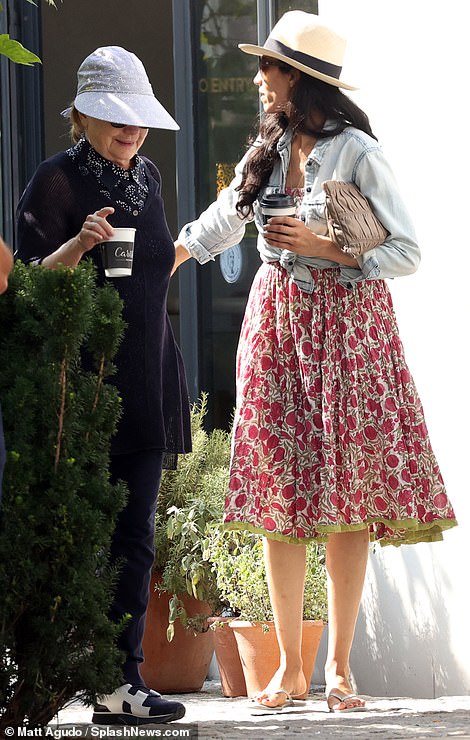 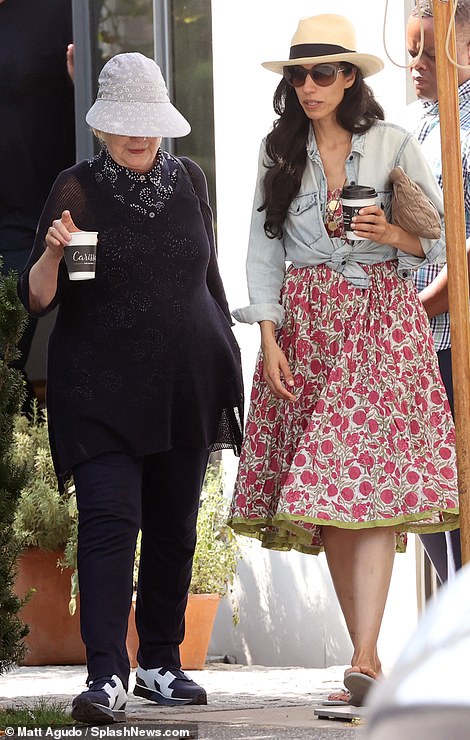 Ladies who lunch: Clinton, 73, and Abedin, 45, were pictured strolling together outside of Carissa’s The Bakery in East Hampton, where they spent time sitting together in the sunshine while enjoying coffee and pastries 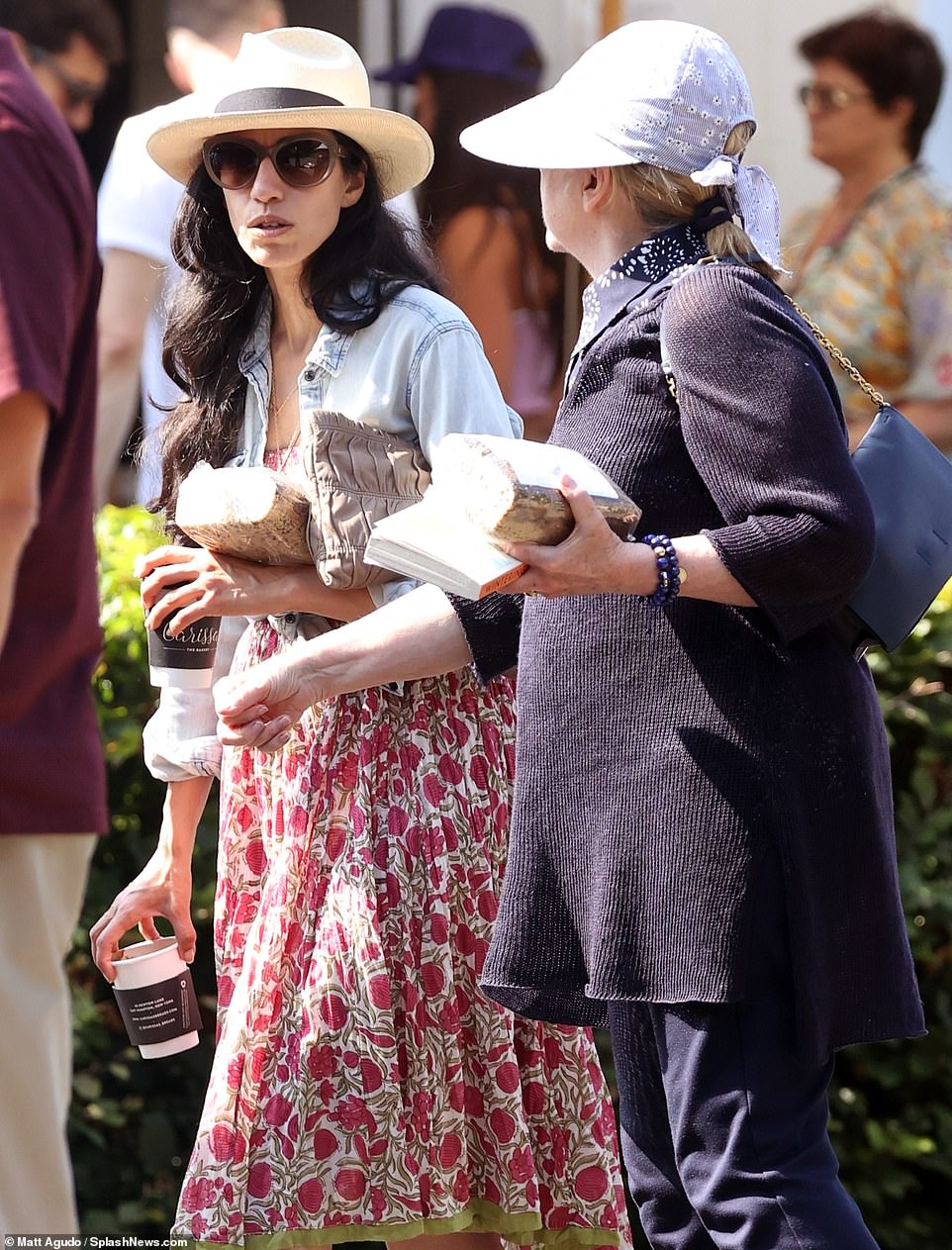 Something for later? Both women were seen toting coffee cups and baked goods as they made their way out of the eatery 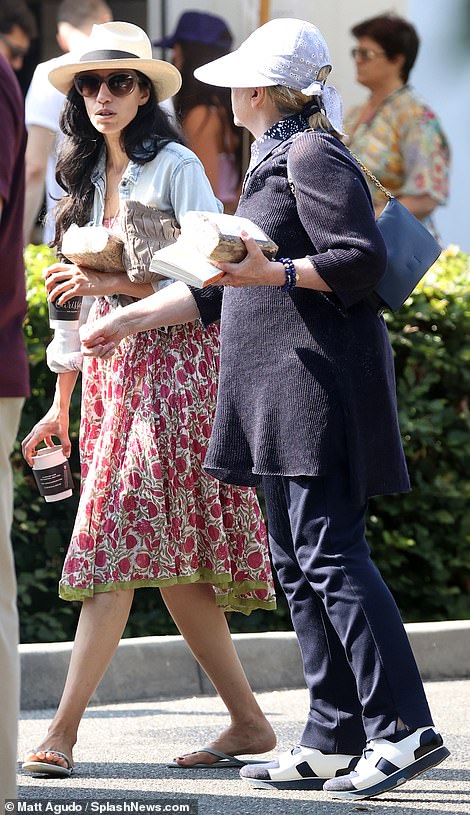 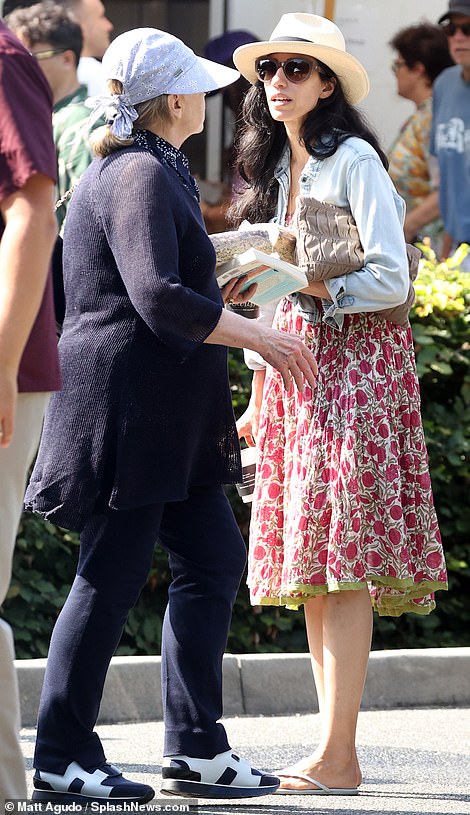 Comfy and casual: Despite the balmy weather, Clinton covered up in a long-sleeved navy sweater, which she wore over a patterned navy-and-white shirt and a pair of long trousers

Starring actress Beanie Feldstein in the role of Lewinsky, the show will track the events that led to Clinton’s impeachment on December 19, 1998, including sordid details about his relationship with his White House intern, who was 22 at the time.

But if Clinton has any concerns about the show’s September 7 premiere, she certainly didn’t reveal them during her outing with Abedin, with whom she has been working since 1996.

Perhaps eager to try and maintain a low profile, both women donned hats and sunglasses, with Clinton opting for a large grey visor, while Abedin wore a more fashion-forward straw hat.

Despite the balmy summer temperatures, Clinton, who had her short hair pulled back in a ponytail, wore a navy sweater over a patterned navy-and-white shirt, pairing the items with a pair of matching long pants and some chunky white-and-blue sneakers.

She also toted a navy handbag with a gold chain strap and wore several beaded blue bracelets on her left wrist.

Abedin on the other hand went for a much more summery ensemble, pairing a pretty red, white, and green frock with a denim chambray shirt that was tied up at the waist. She topped off her ensemble with some simple white flip flops and a nude clutch bag, which she toted under one arm while holding onto her coffee and snacks.

Her long brunette hair was styled in loose waves and left to hang around her shoulders.

As they left the bakery, Clinton and Abedin were flanked by two burly-looking men, who appeared to be part of the former First Lady’s personal Secret Service detail – something that she is guaranteed for the rest of her life as the spouse of a former President.

Both women are regulars in the Hamptons – and in 2013 it was reported that Abedin had actually helped Clinton and her husband Bill to secure a summer rental in the exclusive New York area. 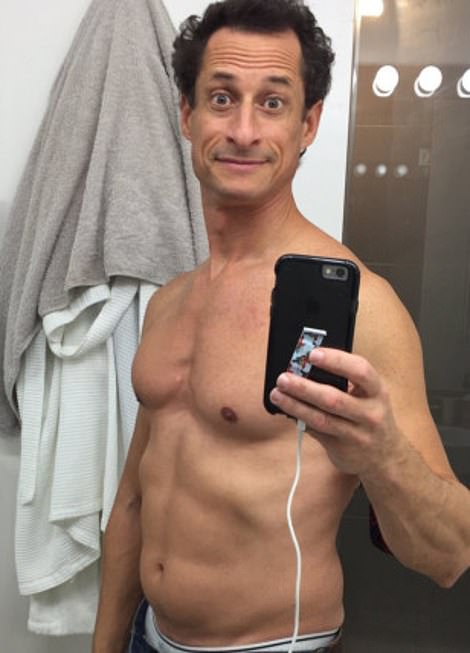 Scandal: In 2016, DailyMail.com revealed that Abedin’s husband Anthony Weiner had been sending lewd sexts to a 15-year-old girl – and an FBI probe into the matter uncovered Clinton’s private server emails

The former first couple has been enjoying an annual getaway in the Long Island enclave ever since – and they are currently wrapping up their vacation together.

Former President Bill was seen spending time by the water while his wife enjoyed her outing with Abedin, perhaps both keen to distract themselves from the upcoming release of the FX show, which will no doubt make for painful viewing for both Clintons.

Interestingly, the Hamptons outing marks the first time that Clinton and Abedin have been seen together in public since March 2020 – when they both attended the premiere of a documentary that examined Clinton’s failed presidential bid, and the scandal of her husband’s affair with Lewinsky.

But while they may not have been seen in public together, it’s clear to see in these latest images that they have maintained a strong friendship – which has had to weather plenty of ups and downs over the years.

Abedin has known Clinton since she was a student at George Washington University, when she worked as an intern in 1996 for the then-First Lady.

She then served an aide to Clinton during her successful run for the U.S. Senate in 2000, before moving up to the role of Clinton’s deputy chief of staff in 2009, a position that she held throughout her boss’s years as Secretary of State in the first term of the Obama administration.

She continued to ascend through the ranks up until being named as chief of staff ahead of the 2016 presidential election, by which point she was considered one of – if not the – closest staffer to the wife of former President Bill Clinton. 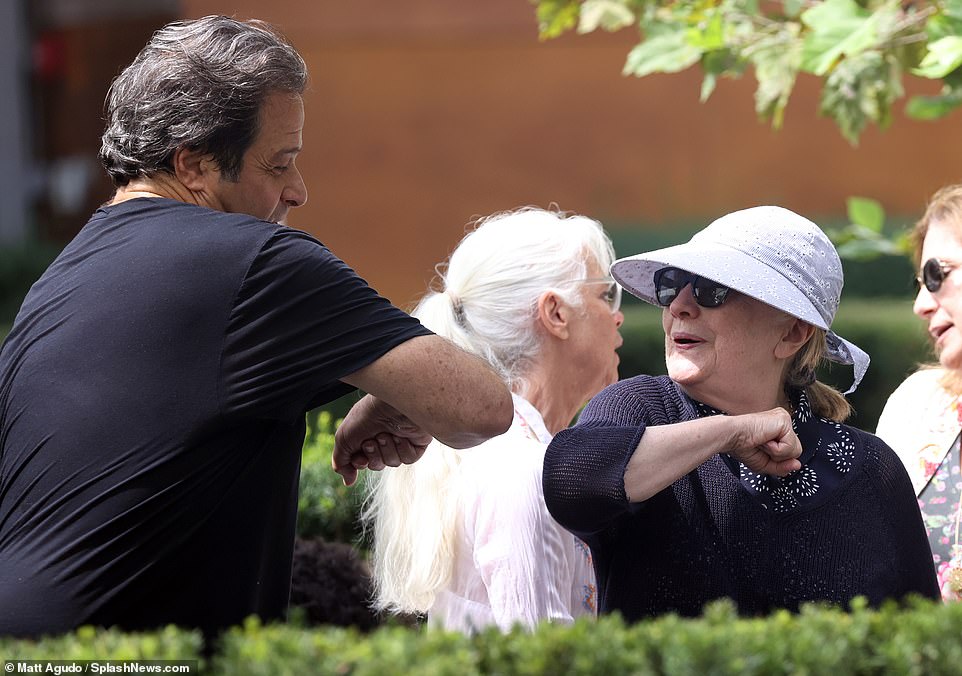 Saying hi: Clinton was pictured offering a socially-distanced elbow bump to a male friend – but despite the safe greeting, nobody in her group was seen wearing a face mask 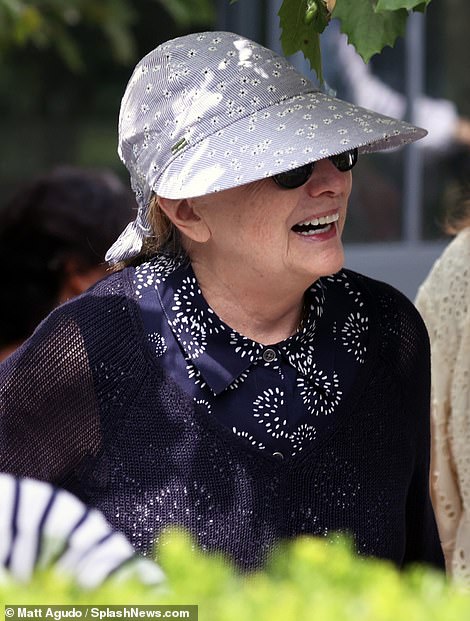 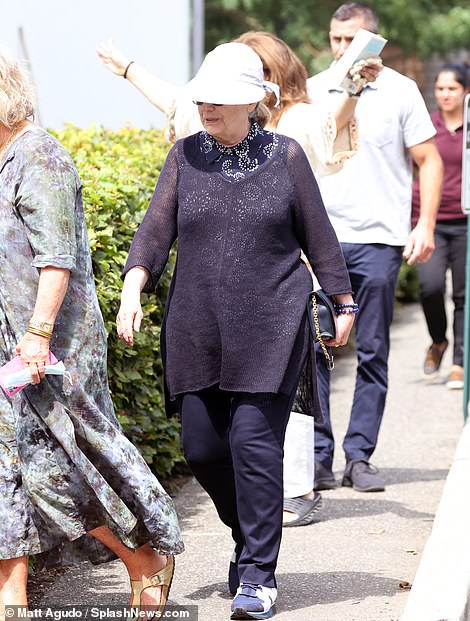 Kicking back: Clinton looked relaxed and happy during the outing, during which she was seen sitting at an outdoor table with Abedin and several other companions 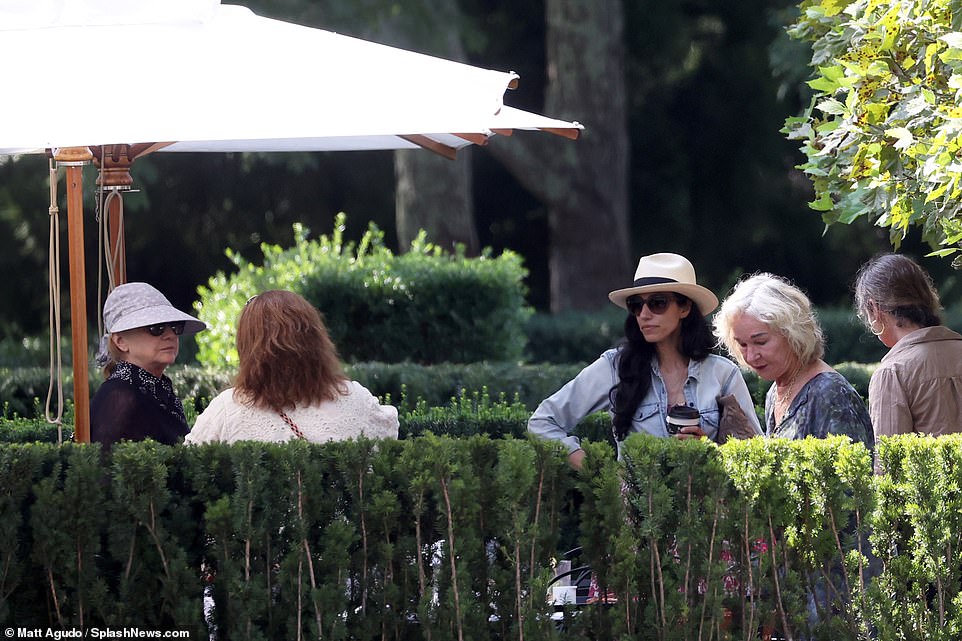 Summer lovin’: It is not known how long Clinton is staying in the Hamptons, however she is currently there with her husband Bill, who was pictured enjoying time with friends on Sunday while his wife caught up with Abedin 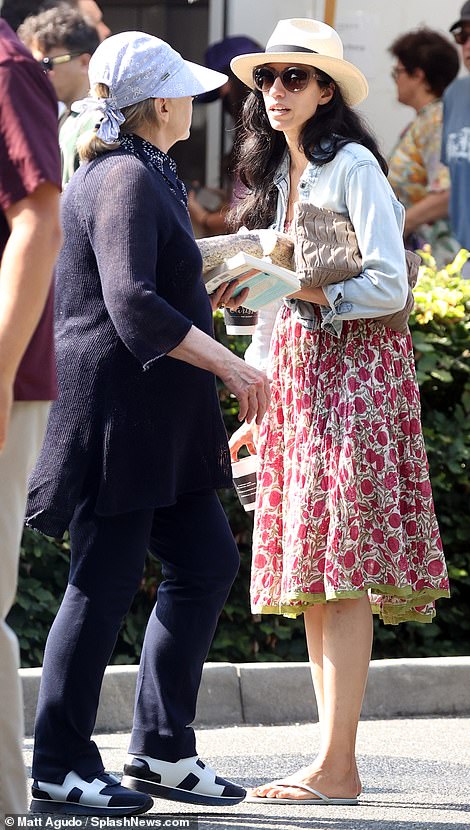 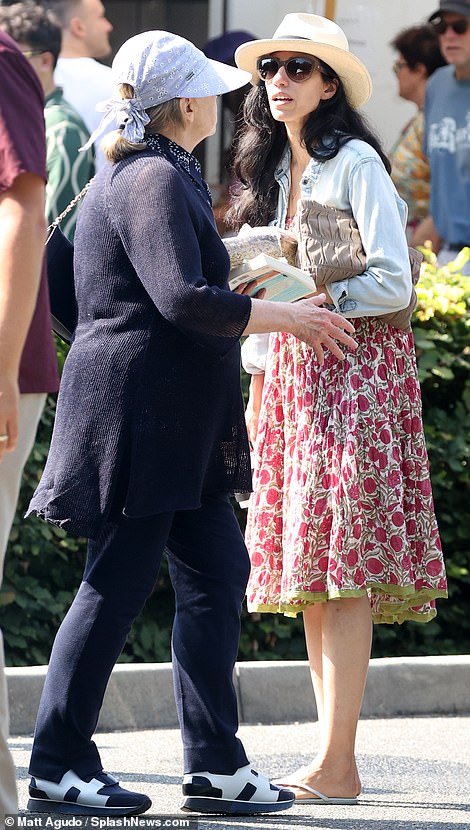 Catching up: The women were seen engrossed in conversation outside the bakery during their outing – which comes days before a new drama series about Bill Clinton’s affair with Monica Lewinsky is set to be released

However, it was during this election that their relationship was dragged into very murky waters, when DailyMail.com revealed that Abedin’s husband Weiner had sent several lewd sexts to a 15-year-old girl – a scandal that sparked an FBI probe, which ultimately uncovered emails sent by Clinton via a secret private server, which were discovered on a laptop belonging to Weiner.

Then-FBI Director James Comey announced in July 2016 that he would not recommend any criminal charges against Clinton even as he said she had been ‘extremely careless’.

But in late October, less than two weeks before Election Day, he informed Congress that the bureau was reopening the case after emails between Clinton and Abedin were found on Weiner’s computer during the probe into the former congressman’s sexting.

The FBI reported a week later that nothing on the laptop changed the recommendation against charges, but Clinton has called Comey’s intervention – and the headlines it created – ‘the determining factor’ in her narrow defeat to Trump.

This scandal will likely be touched upon in Abedin’s new memoir, which she has promised will offer a ‘candid and moving reckoning’ of her marriage to Weiner – from whom she is not yet divorced.

It is not known exactly what details about the sexting scandal, if any, Abedin plans to share in her book, however she has said that she will also share several personal accounts of her experience working for Clinton over the past 25 years. 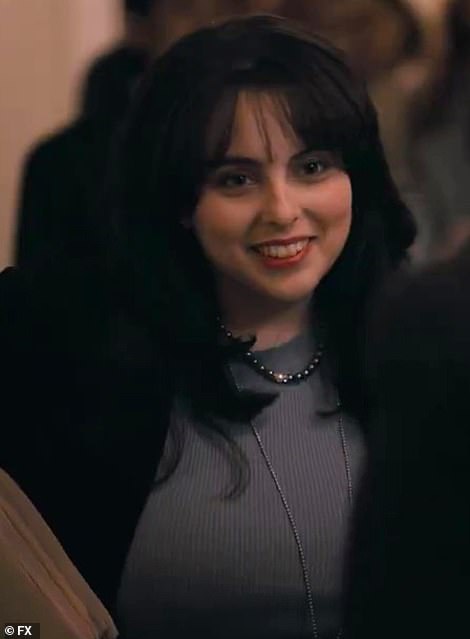 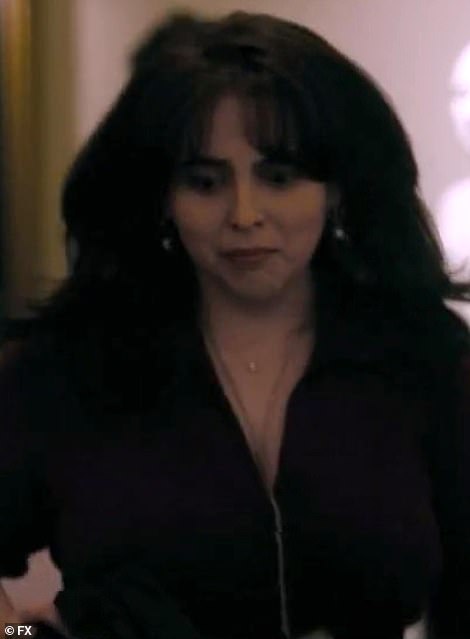 Getting into character: Actress Beanie Feldstein plays Lewinsky in the upcoming FX series Impeachment: American Crime Story, which will rehash many of the scandalous details of Clinton’s affair with the then-22-year-old intern

Scandal: Lewinsky had a sexual relationship with then-President Clinton as an unpaid White House intern, and the affair led to his impeachment in December 1998

It’s been a while! The two women were last seen in public together back in March 2020, when they attended the premiere of a documentary that covered Clinton’s failed presidential campaign and her husband’s affair with Monica Lewinsky

‘For most of my life, I was viewed through the lens of others, a refraction of someone else’s pronoun. “They” as in the parents who raised me; “she” as in the woman I worked for; and “he” as in the man I married,’ Abedin said in a statement about the book.

‘Writing this book gave me the opportunity to reflect on my own life – from the nurturing family I was privileged to be born into, to working for one of the most compelling leaders of our time.

‘This journey has led me through exhilarating milestones and devastating setbacks. I have walked both with great pride and in overwhelming shame. It is a life I am – more than anything – enormously grateful for and a story I look forward to sharing.’

According to the publisher, the memoir will tell ‘her inspiring story, coming of age as an American Muslim, the daughter of Indian and Pakistani scholars who split their time between Saudi Arabia, the United States, and the UK’.