‘His love is his liver’: Londoner shares hilarious translations on the menu at a Yemeni restaurant – including dishes such as ‘small wave’ and ‘normal problem’

While offering translations on a menu can be very helpful for customers who don’t speak the language it’s written on, things can go askew if you rely on Google to do the job.

To prove that point, Twitter user Sue from London shared a snap of a menu her mother had found while dining at a Yemeni restaurant, with some very dubious Arabic to English translations.

Delicacies listed included ‘three eggs on my back’, ‘small waving’ and ‘his love is his liver’.

Dairy fans would no doubt be tempted by ‘cheese cheese’ and ‘cheese cheesecake’, although a dish called ‘thickness of the maroon’, sounded rather more dubious.

Her post, which has received more than 29,000 likes left commenters crying with laughter as they picked their favourite dishes from the menu. 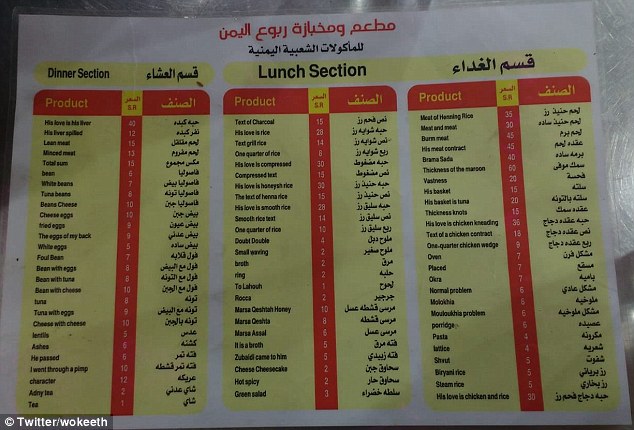 Twitter user Sue from London shared a snap of a menu her mother had found while dining at a Yemeni restaurant, with some very dubious Arabic to English translations

One wrote: ‘I particularly like “his love is compressed”. Story of my life’, while several were tempted by a ‘normal problem’.

‘His love is chicken and rice. Am I wrong to want to date this guy?’ one woman commented.

‘Only wrong if he orders the “I went through a pimp”,’ a commenter replied. ‘It might not be quite the date you were expecting.’

Another said that ‘his love is his liver’ sounds biblical, or like something Hannibal Lecter would enjoy.

Twitter users were left crying with laughter over the bad translations, which a woman explained were as a result of words such as ‘his love’ and ‘one whole’ looking very similar in Arabic

The national dish of Yemen is Saltah, a brown meat stew with chili peppers, tomatoes, garlic, and herbs ground into a salsa, which may also have rice, potoates, scrambled eggs or vegetables added.

Other popular dishes include mandi – meat, rice and spices; a pastry called jachnun, served with tomato dip, eggs and hot sauce, and thareed a dish of pieces of bread in a vegetable or meat broth.

An Arabic speaker was able to explain why such dishes had been translated in such a bizarre way, saying that his love is very similar to ‘one whole’.

‘It is the same writing except with difference in small tiny characters about letters,’ she explained.