Kanye gets schooled: College history professor goes viral with a series of SCATHING tweets posted in response to the rapper’s controversial claim that slavery is a ‘choice’

A history professor’s has schooled Kanye West over his comments about slavery being a ‘choice’ in a series of scathing tweets .

Blair LM Kelley, 44, a history professor at North Carolina State University, took to the micro-blogging site to address the rapper’s claims made during an on-camera interview with TMZ. 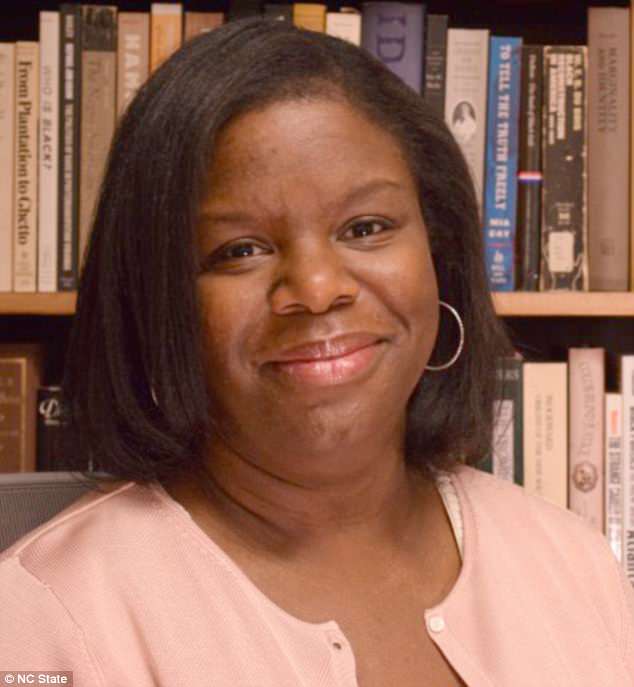 Back to school: Professor Blair LM Kelley, 44, a history professor at North Carolina State University has taken to Twitter to school Kanye West on his comments about slavery 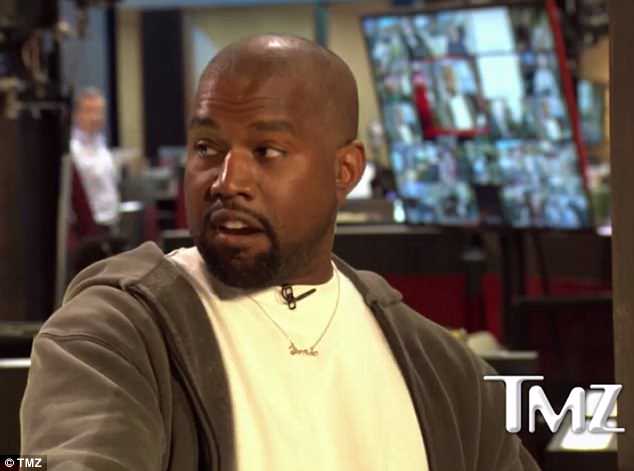 Controversy: During an interview with TMZ Kanye, 40, said: ‘When you hear about slavery for 400 years … for 400 years? That sounds like a choice’ 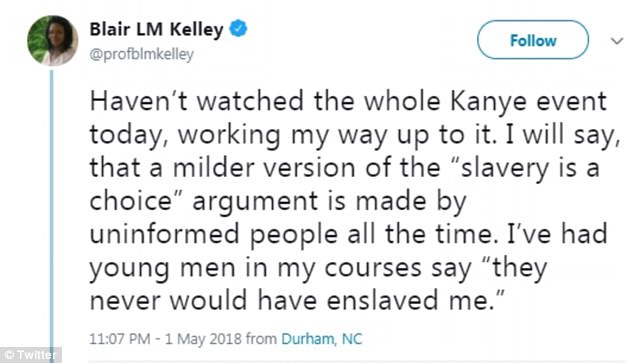 Explanation: Professor Kelley took Kanye to task in a series of tweets which has since gone viral 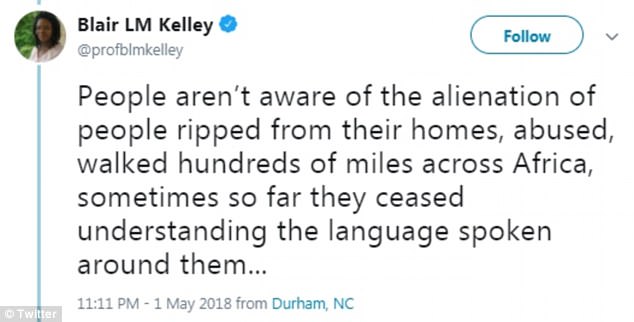 Spelling it out: Kelley started off her argument by addressing what really happened during times of slavery

Harsh reality: She listed what slaves were subjected to and why they couldn’t escape from their brutal surroundings

To the interviewers at TMZ, West said that ‘right now we’re choosing to be enslaved’, which provoked an angry response from a black member of staff at the company, Van Lathan.

However, Kelly’s thread pointing out the inaccuracies in Kanye’s claim and metaphor have struck a chord with the public as her statements have racked up thousands of likes and retweets within hours of her posting them.

She began:  ‘Haven’t watched the whole Kanye event today, working my way up to it. I will say, that a milder version of the “slavery is a choice” argument is made by uninformed people all the time. I’ve had young men in my courses say ‘they never would have enslaved me.’

Her next tweet read: ‘People aren’t aware of the alienation of people ripped from their homes, abused, walked hundreds of miles across Africa, sometimes so far they ceased understanding the language spoken around them…’

She followed this with: ‘People don’t know the brutality of the slave castles were people were held on the coasts, branded still holding out hope for escape, or reconnection with loved one….’

Professor Kelley then posed the following questions: ‘Could they have survived the devastation of the middle passage, packed less humanely than animals below the deck of the ship, chained to people who were sick and dying?

Inhumane: Kelley also pointed out that slaves were treated like animals as they were brought from Africa to the US 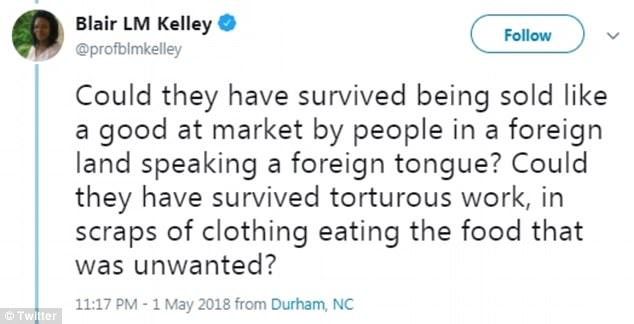 Questions: Kelley asked her Twitter followers if they think they could have survived the harsh reality of being a slave and being made to do ‘tortuous work’ 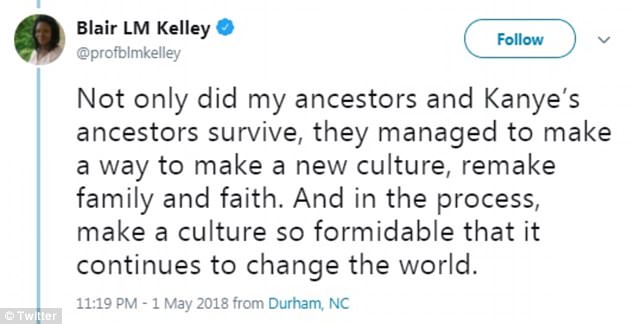 Winners: Kelley proposed that her and Kanye’s ancestors who were enslaved ultimately won by breaking free and creating their own identity and culture as free men and women

Resistance: Kelley also proposed that all slaves chose freedom but they couldn’t always escape the reality of their enslavement

Embarrassment: The academic finally called Kanye an ’embarrassment’ in her concluding tweet

She concluded her lengthy thread with the following statements: ‘Not only did my ancestors and Kanye’s ancestors survive, they managed to make a way to make a new culture, remake family and faith. And in the process, make a culture so formidable that it continues to change the world.

‘Denigrating their lives at this point for attention and spare change is such an embarrassment.’

Those in agreement were quick to voice their own take on the media furore, as displayed by Twitter user @flyachihuahua who replied: ‘Kanye West is getting exactly what he wanted attention for his album release. Good, bad or indifferent a narcissist doesn’t care as long as they are the focus. West is simple put ignorant. Ignorance shouldn’t earn him media.’

A sentiment shared by @ZaZaTheBore who typed: ‘Thank you for this. It’s thoughtful, simple, and strangely uplifting. Obviously slavery is our greatest shame, but recognizing the struggles overcome and the evolution to greatness by American blacks is a hopeful story in the end.’ 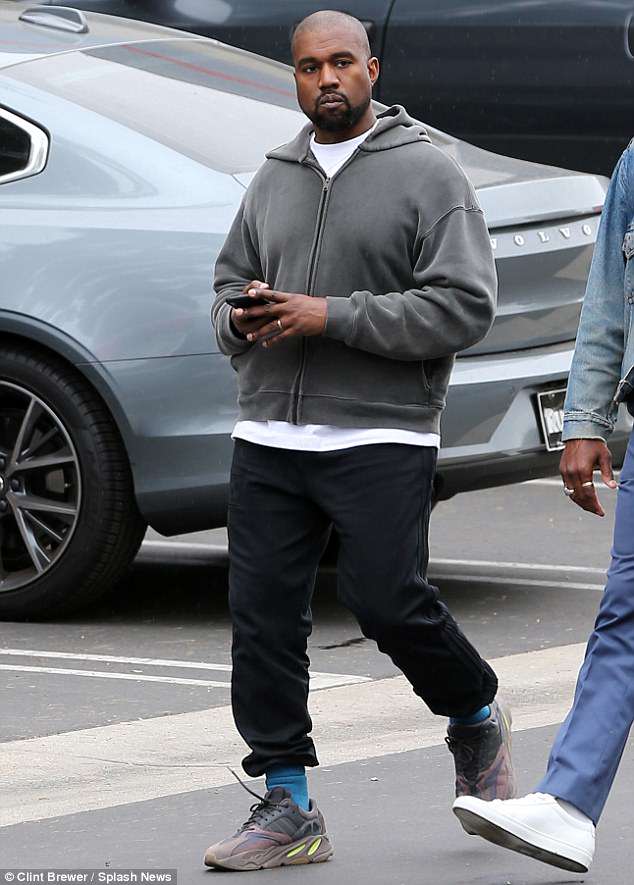 Adding fuel to the fire: Kanye took to Twitter shortly after the interview with TMZ to further explain his claims 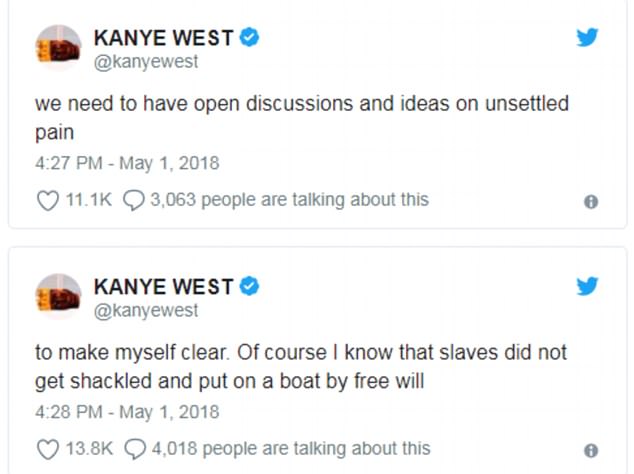 Open discussion: The rapper asked for ‘open discussions’ and admitted that he knew slaves did not go into slavery ‘by free will’

Defensive: Kanye also suggested he was being attacked for ‘presenting new ideas’

However, several Kanye fans were quick to rush to his defense and stated that the professor had missed his point.

Username @Matt_Smo wrote: ‘Kanye wasn’t saying that slavery was a choice, he was saying that the mindset of a victim of slavery hundreds of years after the fact is a choice and if you have that mindset, you are imprisoning yourself in it. I would expect a professor to understand that.’

Similarly @blackdom1911 suggested: ‘I think you’re over intellectualizing his statement, but that’s what we academics do…some Africans killed themselves, other fought and died and like today the majority relegated themselves to their situation survived and their descendants thrived’.

And @alphaMOMster shared: ‘This tweet is where you lost me. Mentally being free is always a choice. Survival mode and powerless victim mode has to stop at some point. Passing the mental imprisonment on and on and on needs to stop. THAT is what he is trying to do.’

West later tweeted that his comments on Tuesday had been misinterpreted and that he ‘brought up the 400 years point because we can’t be mentally imprisoned for another 400 years’.

‘Of course I know that slaves did not get shackled and put on a boat by free will,’ he wrote.