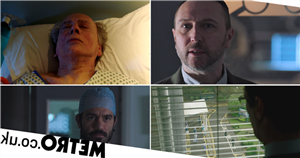 As we move through the trailer, we see Abs (Ali Hadj-Heshmati), Henrik and Sahira all struggling to process the news.

Who has killed Reyhan?

‘After everything, do you really think we’re back on track?’ Dom tells Sacha, of course relating to the fact that if Sacha hadn’t let Jodie (Sian Reese-Williams) into his life, Dom would’ve never crashed his car.

Later on in the trailer, we discover Sacha has been put on leave pending an investigation, hinting at the fact that more people now know about Dom’s operation.

Has Dom’s stoma reversal been a secret plan to destroy Sacha all along?

A new arrival for Max

Max (Jo Martin) was recently seen being taken away in a police car after taking the fall for Louis’ (Tyler Luke Cunningham) thieving. Max is back in the hospital as told by this trailer, but there’s also a new arrival on the cards.

Max seems pleased to see him, but who is it?

This new arrival also looks set to support Max in the coming weeks, who was recently told she has the BRCA1 mutation – a gene that increases Max’s chances of developing breast and ovarian cancer.

It looks set to be a difficult journey for Max, could she face her own terrifying fight when she discovers she has cancer?

Donna leads a nurses strike – and gets suspended

Donna (Jaye Jacobs) has made her views to Fletch (Alex Walkinshaw) about the nursing situation crystal clear. As Fletch is currently Acting CEO, we see him having a meeting with Donna in the trailer, and later on, Hanssen is seen telling Donna that she created a nurses protest without going through the correct channels – and must be suspended.

Donna’s actions may lead her to disaster, but will the way nurses are treated at the hospital change because of this strike?

Ange and Josh’s relationship is exposed

Ange (Dawn Steele) has been enjoying spending her breaks with her new lover Josh (Trieve Blackwood-Cambridge) lately, but that looks set to change as Hanssen is seen confronting Ange about having a relationship with a junior member of staff.

Will Ange tell the truth?

Or is Hanssen confronting Ange down to some further scenes in the trailer?

Josh involves himself in Hanssen’s trauma

‘What I saw in the basement last week, it wasn’t a one off, was it?’ Josh says in the trailer.

Hanssen comes back fighting though as he tells Josh ‘there’s a very fine line between a highly promising career and a complete dead end.’

Whatever Josh has discovered, Hanssen is obviously using his higher status to his advantage here.

If Josh tells someone about what he’s seen, will Henrik use his power to end Josh’s career?

Kian spirals out of control

Drug addict Kian (Ramin Karimloo) is set to spiral out of control completely in the coming months. He’s already agreed to let Andrei (Sonny Poon Tip) stay with him and in the trailer, things are getting worse as Lucky (Vineeta Rishi) is reminding Kian he can’t look after himself, let alone Andrei.

We also hear Lucky saying that if she called the police, they would take all three of them in for questioning.

How bad will things get for Kian?

Fletch’s horror as Evie is stabbed

Well to answer the above question: very bad.

Fletch’s flirtatious behaviour with Director of Funding Jeni Sinclair (Debra Stephenson) looks set to be short lived as towards the end of the trailer, we see Kian rushing to attend to two stab victims. One of which turns out to be Andrei, and the other? Fletch’s daughter Evie (Phoebe French).

What Andrei and Evie are doing together remains to be seen, perhaps they will become friends in the coming weeks?

But why is Evie hanging around with Andrei, a drug mule?

Have the people Andrei’s been running away from found him?

Kian is confronted after Evie is stabbed

As Fletch’s world is turned upside down, we see him confronting Kian. Fletch is going all in with his harsh words in this trailer, commenting on how Kian ‘leaves a trail of bodies’ behind him following his wife and Bea’s death.

We’re assuming Fletch has discovered everything about Kian and Andrei during this threatening moment as guilt is written all over Kian’s face.

Fletch tells Kian he’s a dead man if anything was to happen to Evie.

Will Evie make it out of surgery alive?

Join the community by leaving a comment below and stay updated on all things soaps at our homepage.