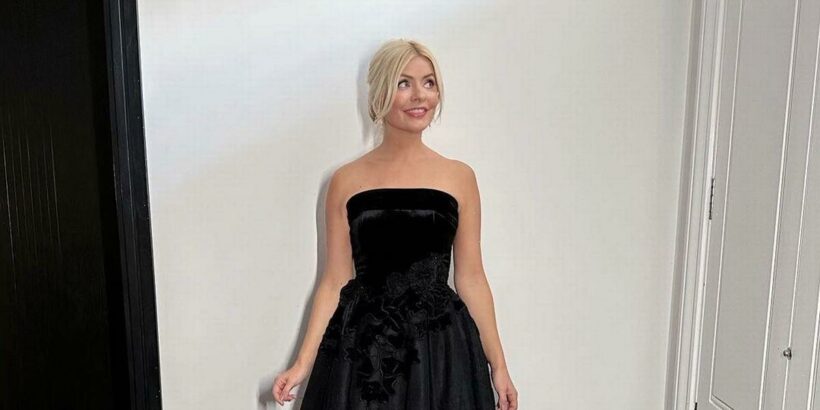 Holly Willougby looked stunning as made her way to the National Television Awards red carpet at London’s Wembley Stadium on Thursday evening.

TheThis Morning presenter,who is known for her regular show-stopping looks on the show, took to Instagram to reveal her elegant look as she gave fans a glimpse of this year's NTA gown.

As she headed to the awards ceremony alongside her This Morning co-stars, the 41 year old showed off incredible sense of style as she opted for a breathtaking black gown by bridal and couture designer Yolancris.

Departing from her usual pastel coloured dresses, the classic black dress featured a strapless square neckline with a corset detailing – a shape that appears to be a favourite for the presenter. As the gown cinched in at Holly's waist, a series of velvet flowers draped around the dress' torso and trailed to the ground.

To compliment the outfit, the TV personality kept things minimal and wore her hair up in a low bun and allowed her face framing layers to rest alongside her cheeks.

Fans were quick to gush over Holly's outfit choice and flooded her comments with positive messages.

Holly’s NTA appearance comes after she and Phillip found themselves at the centre of a social media storm followingallegations that they’d skipped the queue while reporting on the late Queen Elizabeth II’s lying-in-state last month. The ITV duo have since defended their actions and have explained that they attended the occasion as working members of the media.

During an episode of This Morning,Holly addressed the situation and clarified : “Like hundreds of accredited broadcasters and journalists we were given official permission to access the hall.

“It was strictly for the purpose of reporting on the event for millions of people in the UK who have not been able to visit Westminster in person. “The rules were that we would be quickly escorted around the edges to a platform at the back. In contrast, those paying respect walked along a carpeted area beside the coffin and were given time to pause.

“None of the broadcasters and journalists there took anyone’s place in the queue and no one filed past the Queen. We of course respected those rules.

“However, we realise that it may have looked like something else, and therefore totally understand the reaction. Please know that we would never jump a queue.”