When The Sixth Sense, directed by M. Night Shyamalan, hit theaters back in 1999, it was hailed by some as a masterpiece. Critics applauded the writer-director as a new voice. After 2000’s Unbreakable, and 2002’s Signs, Shyamalan was on the cover of Newsweek being called "the next Spielberg" — a prolific auteur for genre filmmaking. But his next few follow ups, such as The Village, Lady in the Water, and The Happening, didn’t share the same success, and his popularity waned. The success of 2015’s The Visit and 2016’s Split, however, were celebrated as a comeback with his latest film, Glass, out in theaters now, anticipated to hopefully be continuation of this trend. Mild spoilers ahead.

Unfortunately, the Glass reviews haven’t been great, overall. But rather than give up on Shyamalan as an untrustworthy director who takes too many risks, Hollywood should keep letting him make his weird movies. His creativity is a necessary component in an industry that churns out the same stories over and over again.

Glass is the final film in a surprise trilogy that dates back 19 years. Unbreakable stars Bruce Willis as a man discovering his supernatural strength, with Samuel L. Jackson as his arch nemesis, Mr. Glass, a comic expert suffering from Brittle Bone Disease who had experienced hundreds of breaks throughout his life. Split stars James McAvoy as a troubled man named Kevin Wendell Crumb, the host for 24 distinct personalities, one of which is named "The Beast," and who devours human flesh, particularly that of teenage girls. Together they form the trio of mastermind, brute, and reluctant hero that appears in any number of comic stories. 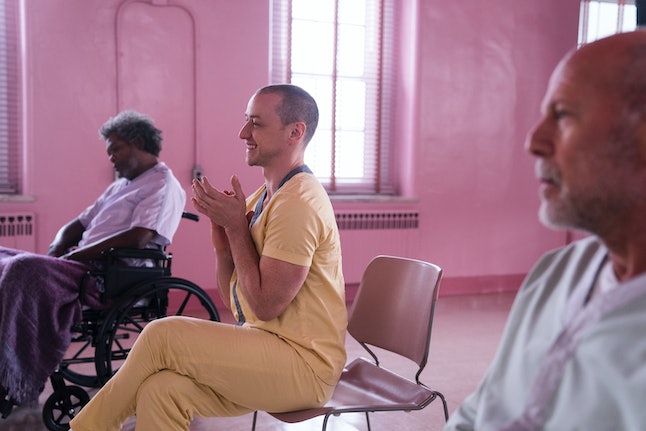 The surprise aspect of the series comes from the fact that Willis’ David Dunn appears at the end of Split — if for no other reason than to connect the two movies. Glass brings this three core characters together in a campy, sometimes thrilling, often silly conclusion. Glass was expected by some to be a cumulative opus — a masterpiece above all Shyamalan masterpieces. It had to be, if he’d been planning it for 18 years.

"The original Unbreakable outline had all these guys in it. It was the triangle of these guys, from Unbreakable and from Split, and it was planned for [McAvoy and Willis’ characters] to meet and fight and fulfill Elijah’s dream of proving that comic books are connected to reality. That was the original plan,” Shyamalan told The Philadelphia Daily News. The groundwork was there and the expectations, therefore, were high.

Personally, I found Glass fun and exciting in certain moments, but its twists and turns became more unclear as the film went along, the over abundance of characters made it a but jumbled, and the big showdown at the end seemed more of a putter than a grand clash. There are a number of critics out there who disagree with me, who loved the film. And there are no shortage of pans of the movie, including many that lament its worthiness of following up Unbreakable. For Variety, Owen Gleiberman writes, "Glass is a sequel that feels more dutiful than necessary. It turns the earlier film’s ominous pop poetry into overexplicit blockbuster prose."

But Hollywood needs the director’s imagination. Even though Glass doesn’t live up to the expectations we had of it, and even if his creativity ebbs and flows, Shyamalan should still keep trying. He’s made some incredibly creative choices and taken noteworthy risks throughout his career. After his first mind-boggling twist — Bruce Willis was dead the whole time — Shyamalan brought us one of the most riveting alien invasion stories told on screen, a town of people successfully living off the grid, an inner-city mermaid, and our own planet fighting back against the humans destroying it. He doesn’t adapt books or remake old movies, rather he mines his own mind for the weirdest and most wonderful story he can carve out. 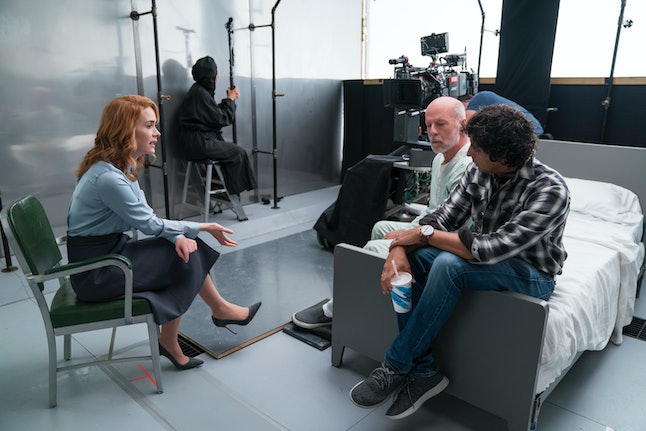 Obviously I’m not saying every Shyamalan film is a masterpiece. But it’s hard not to watch Glass and think that maybe it’s a little hokey on purpose. Unbreakable was a dark drama that only subtly nodded at comic books, we’ve had 18 years of other comic movie adaptations to lure the average filmgoer into the genre. Alissa Wilkinson at Vox points out that, at one key moment, Jackon’s character shouts, "Ah, the classic turn!" while another character "has to have the concept of a ‘showdown’ explained as a scene where the bad guys fight the good guys … Nearly two decades later, the release calendar and box office are dominated by huge-budget, high-profile movies based on comic books. Audiences know there’s always a showdown."

In 2019, when the DC and Marvel universes yield several tentpole movies a year, something as understated as Unbreakable might be criticized as being too vague. The genre has so completely taken over and over-loaded the industry that the tonal shift from Unbreakable to Glass feels more like a criticism of Hollywood than of Shyamalan losing his vision.

Glass goes full camp, waffling back and forth between being a superhero movie and mocking superhero movies and their fans. At one point, Sarah Paulson’s Dr. Ellie Staple asks exasperatedly, "Have you ever been to a comic book convention? They’re just selling things!" Between Mr. Glass melodramatically narrating every turn of events in the climax, to the empathetic damsel, to the slight of hand that reveals the villain’s true intentions, Glass uses so many comic book tropes that their cheesiness can’t possibly be unintentional. In her review in The New York Times, film critic Manhola Dargis writes, "Samuel L. Jackson keeps winking at the camera. It’s a character tic, but it’s nice to think that Jackson is signaling that he’s hip to the absurdity." 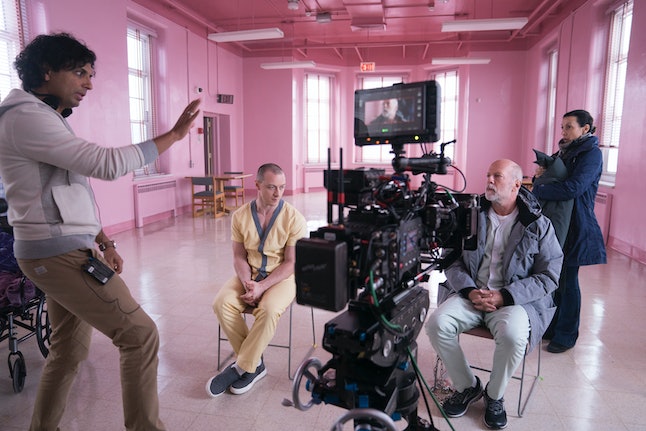 In his 2006 feature, the fairytale-inspired Lady in the Water, Shyamalan kills off its film critic character in a cathartic meta nod to the bad reviews his films have received. But Glass feels like a takedown not of film crticism, but of our current blockbuster culture. And the fact that it’s a sequel, and the third film in a trilogy (everyone knows the third one is always the worst) makes it all the more meta.

It’s hard to say if every hackneyed moment in Glass is there on purpose, but I still think it works better if you look at it as being of its time — a zeitgeist-y comment on the state of the industry, the demands of fan culture, and the transformation of comic movies from something previously reviled to now being worshipped. What happens when we stop asking our heroes to be the best, and just ask that they be, every few months, with a budget of $200 million dollars? 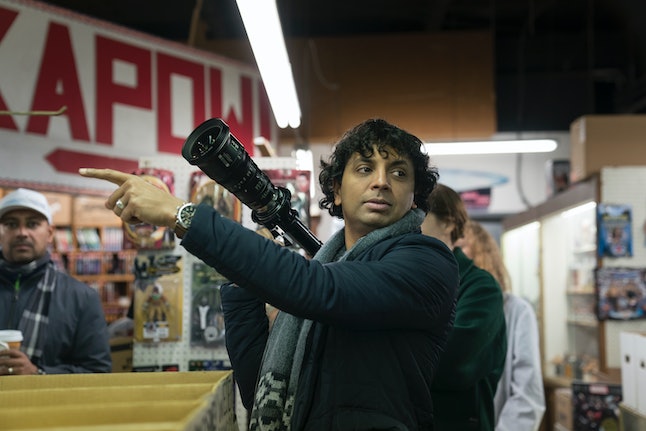 Shyamalan’s work has definitely been inconsistent. His lowest grossing movie, aside from 1998’s Wide Awake, at which point no one had ever heard of him, was The Lady in the Water, while his Rotten Tomatoes scores range everywhere from an 85 for The Sixth Sense, to his most poorly reviewed film, The Last Airbender, which has a dismal five percent rating on the site. Interestingly, that project was based on a previous intellectual property, an animated series. So perhaps that’s another sign that he should stick to his own ideas, even though they are hit or miss.

However, if Shyamalan is going to get 20+ chances at making movies, some of which bomb at the box office and some of which earn wretched reviews, then the same courtesy has to extend to female directors. And currently, it doesn’t. Hollywood history has shown that, after one failure, multiple female directors have been put in "movie jail" for decades before they were given a shot at a big screen project again, while men are afforded more misfires. Directors like Karyn Kusama, Mimi Leder, and Tamara Jenkins, among others, have had to fight their way back into the industry after one poorly-performing project.

In that sense, Shyamalan is an example of a larger group: directors who think big and shoot high, and are willing to take the risks. So when the superhero movie craze does either burn out or calm down, we’re going to need filmmakers like Shyamalan, who are looking to keep creating new worlds.