A mother who homeschools her daughter has claimed she’ll do a ‘much better job’ than teachers, insisting that mainstream schools are failing children.

Mum-of-three Biba Tanya decided to teach her four-year-old daughter Tabitha herself because she fears she won’t get enough attention in a large class, and will be put under undue exam dress.

Speaking on Good Morning Britain, Ms Tanya claimed that Tabitha is already ahead of pupils starting school as she can read and write.

But GMB viewers disagreed with her decision, with one person branding her ‘deluded’ for thinking she can do better than qualified teachers.

The ITV chat show was debating the issue amid news that the government is considering introducing a compulsory register for homeschooled children to avoid them ‘disappearing’ from the education system. 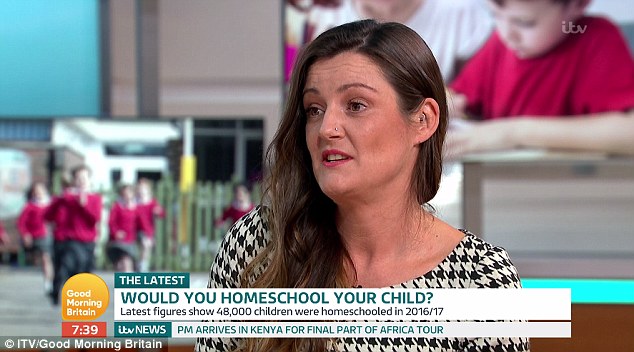 Mum-of-three Biba Tanya homeschools her four-year-old daughter Tabitha and claims she will do a ‘much better job’ than teachers because schools are overcrowded and put too much pressure on children for their exams. Pictured: Tayna on Good Morning Britain on Thursday

Ms Tanya said her son – who has ADHD and Asperger’s Syndrome – has been ‘failed’ by mainstream school because of the pressure put on him ahead of his SATs exams, which she claims made his hair fail out.

She said: ‘It’s the pressure they put on for the SATs when I was witnessing that; his hair was falling out when he was taking those tests,’ she explained.

‘That’s how much pressure school is putting on them for no other reason for than where the school is falling. The SATs isn’t an exam for the child, it’s for the school.

‘The classroom sizes, I don’t think they get the right attention. I think they’re told what to think not how to think, and I think I can do a much better job for my daughters.’

Her comments were criticised by viewers on Twitter (pictured), with many saying she wouldn’t do a better job than teachers and branding her ‘deluded’

Ms Tanya takes her daughter to ballet and gymnastics classes so that she gets to socialise, and says she will take courses to teach the little girl anything she herself doesn’t know.

She plans to educate her until she is old enough for university, but insists she will let Tabitha go to school if she asks to.

She continued: ‘I’m not teaching her, I’m facilitating her learning. So if she wants to learn something that I’m not certain on, physics for example – I was awful at science at school – when she wants to learn that we’ll learn it together, there are online courses there are books. 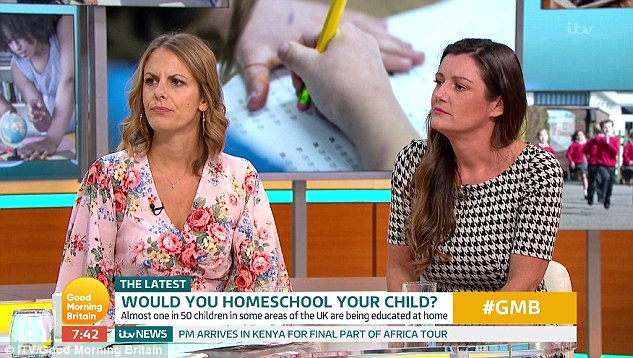 She claimed  that Tabitha is already ahead of pupils starting school as she can read and write. Pictured: Ms Tanya on Good Morning Britain with former primary school teacher Sarah Relf 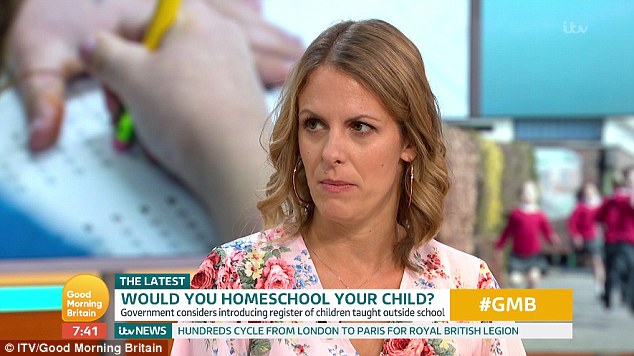 Ms Relf said that children are much better off in school with teachers because teachers are taught how to manage a class, facilitate their learning and prepare them for the ‘grown up world’. Pictured: Ms Relf on Good Morning Britain

Ms Tanya said that Love Island is proof that mainstream education is failing pointing out how contestant Hayley Hughes didn’t know that Wales was a country and thought Essex was its own continent.

Yet her comments were criticised by viewers, who took to Twitter to say that teachers are the best choice to educate children.

One tweeted: ‘A woman that’s going to ”educate” her child versus an experienced teacher, bore off.’

‘This Mum is deluded,’ another posted. 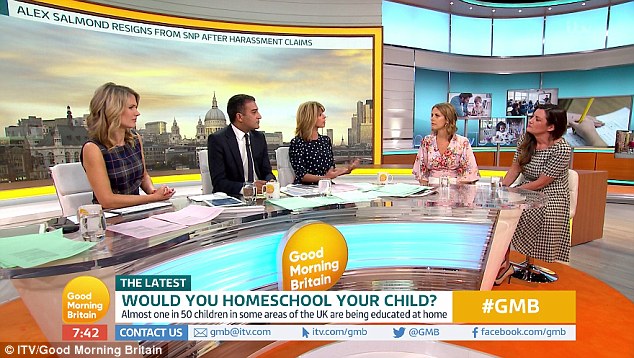 A third said: ‘Does this mum not realise she’s depriving her child of so much by home schooling her.’

Ms Tanya was opposed in the debate by former primary school teacher Sarah Relf, who stressed the importance of attending school for children.

She explained: ‘I went to university for three years to become a teacher I didn’t just do my GCSEs and go ”Right, I can teach a child now, that’s me done.” We are shown how to manage children, we’re shown how to facilitate their learning, we’re shown the best way to create that environment. They’re given a programme of study to make the best possible going into the grown up world.

‘How are they going to get those social skills? The first six weeks of school is literally spent teaching children how to follow a routine, managing expectations, forming relationships, learning how to resolve conflicts, all those sorts of things that they cant do if they’re sat at home with their mum.’