Cate Le Bon’s music routinely summons praise for its individualism: words such as "idiosyncratic" and "unique" dot reviews for the Welsh songwriter’s five albums. It’s the result of the 36-year-old’s intuitive approach to music, but also, she thinks, of the freedoms afforded to a fringe musical figure. 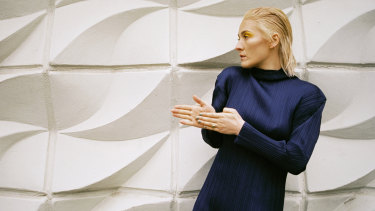 Cate Le Bon: “As you go on … you care less about what other people think of you.”Credit:

“I’ve been lucky in that I’ve never been popular in a way that’s felt limiting,” Le Bon says. “I’ve always just been able to do what I want to do. When I was in my 20s making music, I felt a bit more bombarded by thoughts of what I thought I should be doing. But, as you go on … you care less about what other people think of you. And the less you care, the more honest it becomes, and the more vulnerable you can be. That’s a great place to be when you’re making something.”

In between her fourth and fifth albums, 2016’s Crab Day and 2019’s Reward, Le Bon spent a year making something else entirely, studying furniture-making at the renowned Waters & Acland school. The idea of carving something from wood just as she’d carved things out musically sounds great, but Le Bon sees more differences between the artforms than similarities.

“In many ways, it’s opposite,” she offers. “There’s something lovely about sitting with a solid piece of wood, there’s something so grounding and tangible about it. You can visually see the progress when you’re, say, making a chair. Whereas sometimes, when you’re putting a song together, it can feel like you’ve spent a month doing absolutely nothing.”

While studying, Le Bon lived alone in a cottage in the Lake District of north-west England. The landscape felt familiar, given she grew up in the Welsh countryside, in Carmarthenshire. “It was a pretty rural upbringing,” she recounts. “We’d spend most of our time outside, even in the dire Welsh weather. It was lovely, really idyllic. Me and my sister were borderline feral.”

We just sort of surrendered ourselves to every mood … it was wild and untethered.

As her music career progressed, Le Bon moved to Cardiff (where she made her first two albums, 2009’s Me Oh My and 2012’s Cyrk), then Los Angeles (where she’s recorded her subsequent albums). After her year in the Lake District, and the release of Reward, she has had no fixed address.

“It’s while I figure out where I want to be,” she says, simply.

An important locale for her recent musical output was the desert town of Marfa, Texas. She spent a week at the Marfa Myths festival, making a collaborative EP with Deerhunter frontman Bradford Cox. “Bradford is endlessly inspiring. He’s just one of the most magnificent humans on planet Earth. He feels like he’s been here since the beginning of time,” Le Bon says. “We just sort of surrendered ourselves to every mood, the weather that came in and out of the studio. It was wild and untethered. That was a lovely introduction to working with each other.”

They stayed on in the studio to record Deerhunter’s latest album – Why Hasn’t Everything Already Disappeared? – with Le Bon as producer; their two albums are “like f—ed-up siblings”, she says.

Le Bon is thoughtful when asked about working as producer for others. “It’s such a nebulous job title,” she says. “Your role changes with every person you work with, sometimes changes five times a day. All I know is what I would want from a producer: honesty, focus, equality; a collaboration where there’s no hierarchy, no right or wrong. Your job is to encourage people to do something different. And it should always sound like the band, not like the producer.”