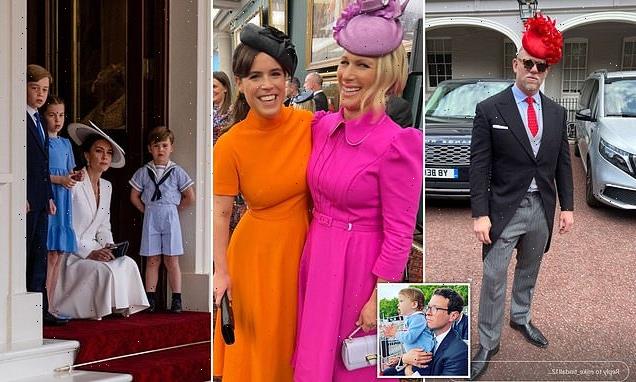 Princess Eugenie, Mike Tindall and William and Kate adopted an ‘A-lister’ approach and ‘shared candid snaps’ to make the Firm ‘relevant’, an expert has claimed.

The Duke, 39, and Duchess of Cambridge, 40, took to their official Instagram page earlier this week to share a number of photographs from events across the Jubilee weekend, including images taken backstage at royal events.

Meanwhile Princess Eugenie, 31, shared touching photos of her family waving at the Queen’s Platinum Jubilee flyover, as well as enjoying the Platinum Pageant on Sunday night, on social media.

And Zara Tindall’s husband Mike gained 50,000 followers on his Instagram page after sharing images posing in his wife’s fascinators and enjoying the festivities.

Popular culture expert Nick Ede told FEMAIL the posts were ‘synonymous’ with the way A-list celebrities share online, explaining: ‘This new way of sharing images is a way of creating a relevance and also engaging a new audience to see and feel like they are a part of the Jubilee.’ 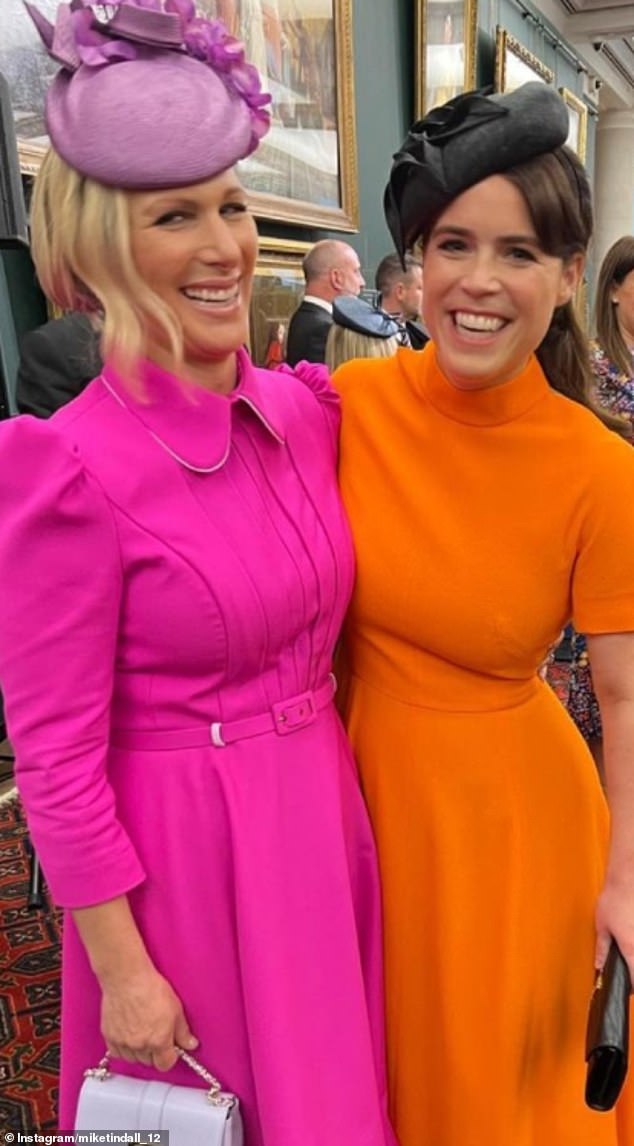 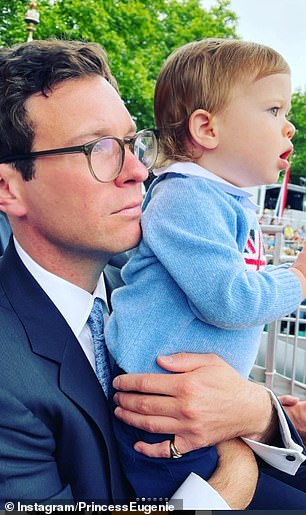 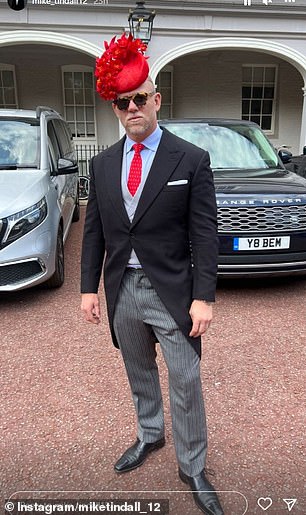 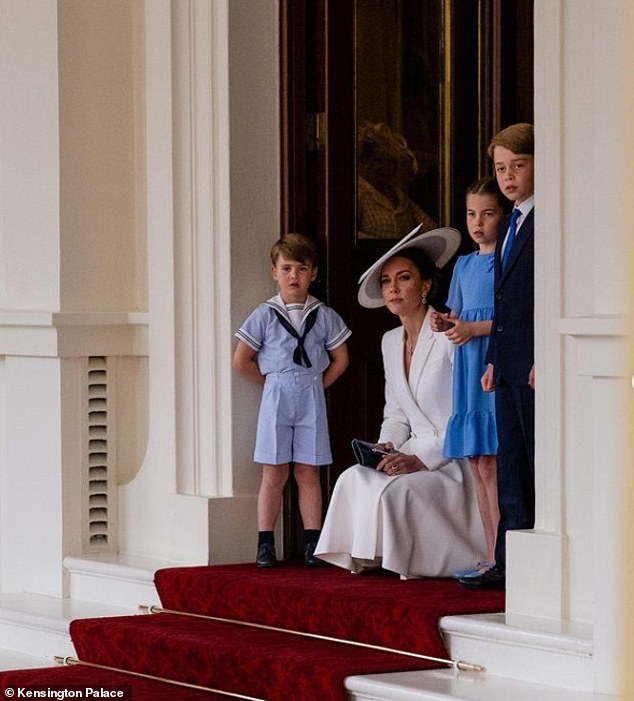 He explained: ‘The royal family are creating a really great way of communicating themselves to a new audience of fans.

‘With Mike Tindall sharing candid images of his family behind the scenes and Princess Eugenie giving fans an insight Into the Platinum Jubilee, the use of social media in the Royal Family has never been so prevalent. Kate and William also posted unseen images too.’

He compared the use of social media to that of A-list celebrities or reality stars, adding: ‘Sharing candid moments allows an all-access insight into the lives of people we look up to and also creates newsworthy content too.

‘I think that this sharing culture in the royal family is something we will see more and more of. 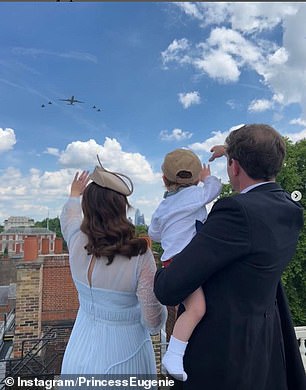 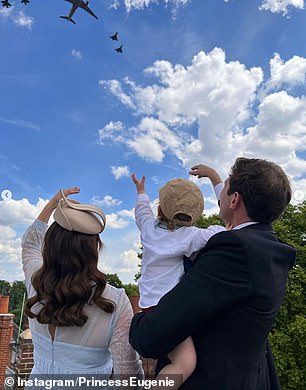 Princess Eugenie shared a number of gushing posts from parties she attended over the Jubilee weekend (left and right). The young mother posted several snaps of her son August at Trooping the Colour 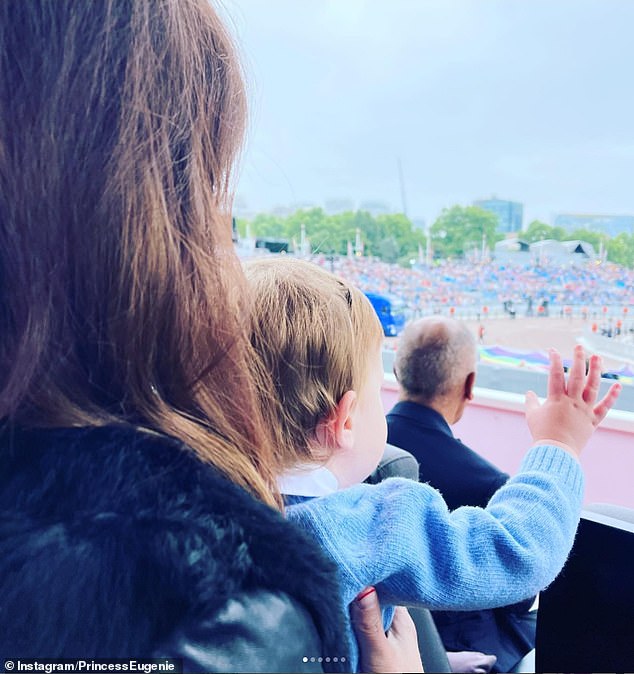 ‘It still allows the family to censor the images and release the images they want people to see, allowing them to steer the narrative and give insights into their lives.’

Princess Eugenie posted a number of gushing Instagram posts about the celebration, sharing family shots of her son August at Trooping the Colour and the Platinum Pageant.

Meanwhile she has also heaped praise onto her grandmother the Queen, yesterday sharing a number of images and writing: ‘Thank you, Your Majesty, Grannie, for 70 years of service, selflessness and dedication. You are such a shining light for us all.

‘Just a final roundup of some epic moments of the most special weekend that I was so honoured to be a part of. 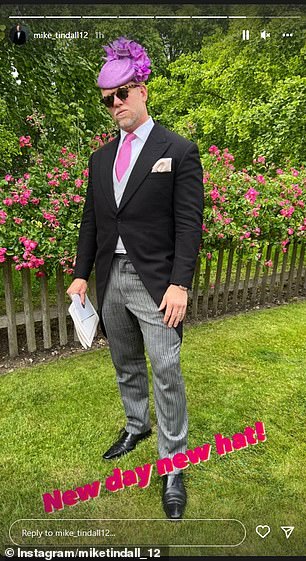 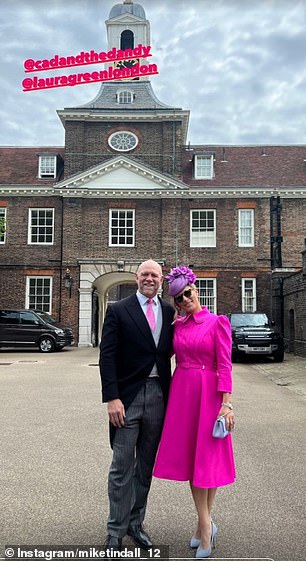 Former rugby ace Mike Tindall has shared a number of snaps posing in his wife’s fascinator over the weekend (left), as well as a snap of the couple posing ahead of the service on Friday (right) 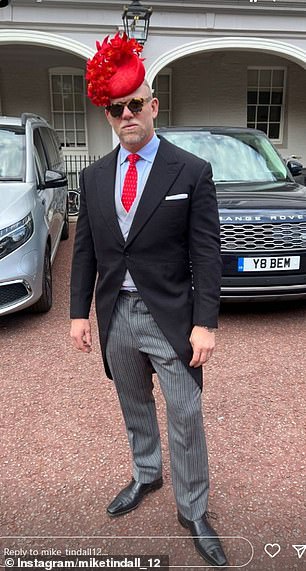 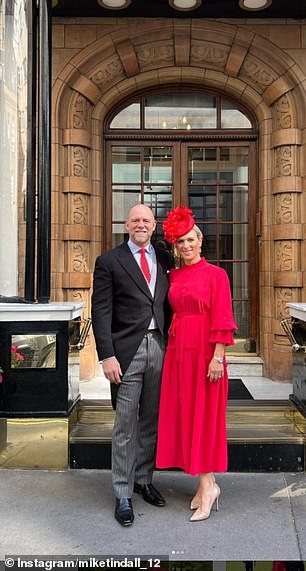 ‘From The Birthday Parade, to celebrating with in Paddington, to showing Augie the colourful pageant and ending cheering loudly for this remarkable woman.’

The former England rugby star, 43, who is married to Princess Anne’s daughter Zara, has been posting snaps of his celebrations marking the Queen’s 70 years on the throne on his Instagram page.

The father-of-three shared a snapshot of his wife alongside her cousin Princess Eugenie on his social media, playfully writing: ‘When you combine your favourite Starbursts!! Two world class ladies!! #starburst #platinumjubilee.’

The father-of-three also shared a number of snaps posing in his wife’s fascinators after they attended Trooping the Colour and the Service of Thanksgiving on Friday.

Meanwhile the Duke and Duchess of Cambridge also posted a number of backstage photos from events on their Instagram page. 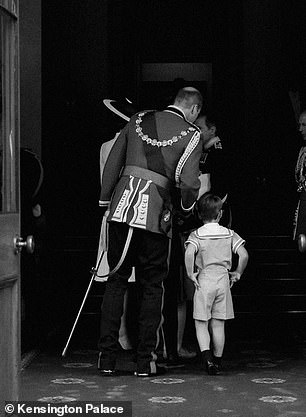 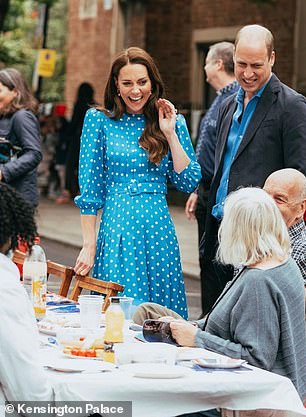 The Duke and Duchess of Cambridge took to their official Instagram page to share a number of photographs from events across the weekend, including images taken at royal events

In images shared online, the family could be seen gathering backstage at official royal events, including Trooping the Colour.

In one snap shared by Kate and William, the mother-of-three can be seen waiting with George, Charlotte and Louis on steps of Buckingham Palace at Trooping the Colour.

In another, Kate and William can be seen attending a street party in Kensington, just a short walk from her London residency of Kensington Palace, as they chatted with local attendees.

Meanwhile the caption hinted at the fun they’d had as a family over the weekend, reading: ‘We all had an incredible time, especially Louis…’. 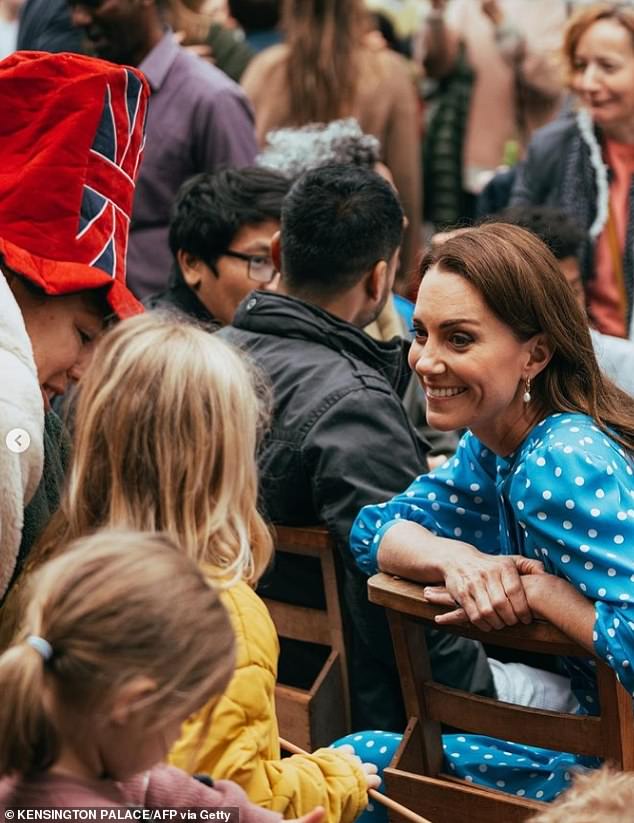 A number of other photographs showed the couple at a Kensington street party. The Duchess was dressed in a blue dress with white polka dots, which she later changed out of when she appeared at the Royal Box in pink on the fourth day of the Jubilee weekend

Four-year-old Prince Louis stole the show at a number of royal events over the weekend.

After wowing fans on the Royal balcony, he showed off his star power again while watching the fourth day of Platinum Jubilee celebrations last night.

The caption on Prince William and Kate’s post read: ‘What a fantastic weekend of celebrations.

‘Seeing people across the nation coming together with family, friends and loved ones has been extremely special.

‘Thank you to everyone who turned out to show their gratitude to The Queen and her inspiring 70 years of leadership. 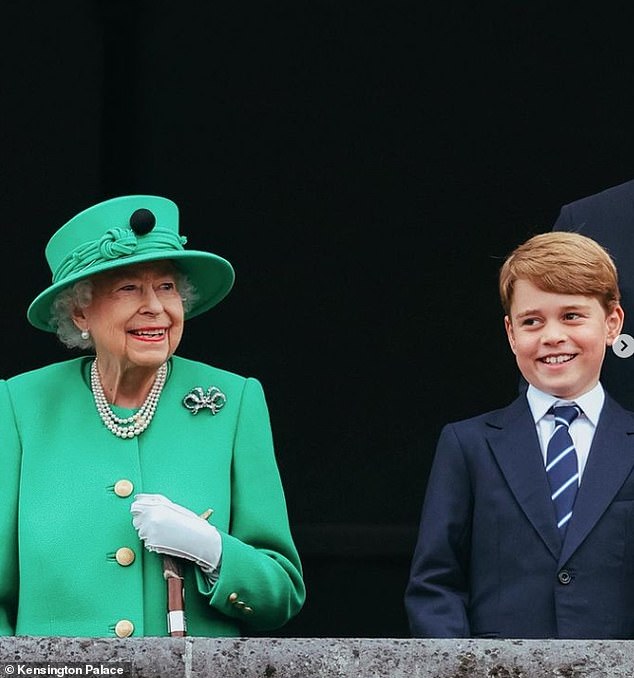 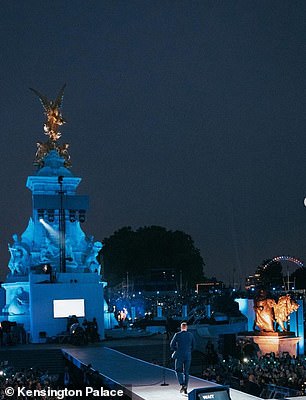 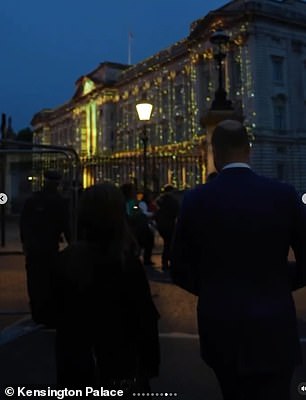 In snaps posted by the couple, Prince William was seen walking out on stage (left) and backstage with their children (right)

‘From the crowds on the Mall to communities hosting street parties up and down the country, we hope you had a weekend to remember.’

The caption went on to hint at the fun the youngest Cambridge child had had during the event.

Prince Louis wowed royal fans over the weekend and delighted crowds on Thursday as he stood next to his great-grandmother The Queen with his hands covering his ears amid the roaring cries of the public.

And as he sat next to the Duchess of Cambridge in the Royal Box at the Platinum Jubilee Pageant in London, he reacted with similar wonder at all the fuss.

At times, he was pictured cocking a snook, put his hands over his mother’s mouth, waved his arms in the air and stood on his seat for a better view.

He later moved across to his other relatives and sat on his grandfather Prince Charles’ lap, who pointed out the spectacles in the parade.