There are some holidays that people don’t give enough credit for celebrating. Yes, Christmas and Thanksgiving are pretty much first place, but c’mon people, think outside the box a bit! Personally, I find Valentine’s Day to be a super underrated holiday — and one that many people scoff at, due to it’s "Hallmark-like" nature. But the holiday is to show the person you love just how much you love them, and to do something out of the ordinary as a token of your appreciation. For instance, you can really go off-the-walls like rapper Travis Scott and fill your significant other’s home to the brim with flowers, like he did for Kylie. A genius idea for sure, but here’s how much it really costs to fill a room with roses — and, spoiler alert, it’s going to set you back a pretty penny.

In case you overlooked the absurdly sweet act of love, on Nov. 6, 2018, Keeping Up with the Kardashians star and beauty mogul Kylie Jenner came home to her entire mansion filled with hundreds and hundreds (and hundreds) of red roses and candles.

Every nook and cranny was seemingly stuffed with beautiful red roses — we’re talking about every step of every staircase, every corner you turn, every surface available. Jenner took to Instagram with a short video of her flower-filled home with a caption that read, "hell of a way to end the night," followed by a red rose emoji (naturally) and a black heart emoji:

hell of a way to end the night ?♥️

Mhm. Mhm. I mean, I once got a dozen red roses that were almost definitely from a bodega, so that’s essentially the same thing, right?

But realistically, how much could an idea like that cost? While we weren’t able to look at Travis Scott’s receipt from the florist, we can get somewhat of a ballpark idea by looking at the most recent floral trend that celebrities are seemingly taking part in: huge floral arrangement designs for celebrations.

Do you remember when Khloé gave Kim’s daughter, Chicago, a stunning arrangement that spelled out her name when she was born?

From Khloe to Chicago ♥️? #kimkardashian

This is more beautiful than quite possibly anything I’ve ever seen.

And who could forget when Kim sent Chrissy Teigen a flower bouquet after giving birth to her son, Miles?

Joey Lawrence WHOA ❤️❤️❤️ @kimkardashian thank you!! Going to open a potpourri business in about one week taking orders now!

Look at that thing! The bouquet is so big that it nearly hovers over Luna. Teigen even joked that she could start her own "potpourri business" and she’s honestly not wrong.

And can we please talk about the gorgeous display of Stormi’s name after Jenner gave birth? 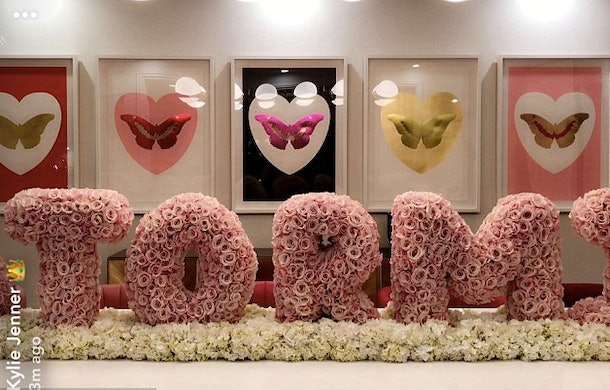 Still not over it.

So, let’s say you wanted to make like a Kardashian and get on the floral bandwagon. Or, perhaps you’d prefer to pull a Travis Scott and fill an entire room with roses for your significant other. But… how does one go about paying for something like that? Let’s just say it’s going to cost you so much, you might want to consider taking out a loan.

Refinery 29 reached out to several florists in the Los Angeles area to see whether or not one could weigh in on the cost of creating a floral arrangement like a Kardashian. And, while many were unable to provide any concrete details, a shop called The Empty Vase told the site that, because they previously worked with the Kardashian family, they signed an NDA and would be unable to be quoted.

But The Daily Mail used The Empty Vase’s website to try and get an estimate, and concluded that it charges between "$650 to $850 per letter of roses," meaning something like Kylie’s "Stormi" floral arrangement could "potentially cost in the region of $3,900 to $5,100," as each letter contains anywhere from 250 to 350 roses. It should be noted that The Empty Vase didn’t create the arrangement, but was merely used to help estimate the cost.

Now it’s time to do some math.

Let’s hypothetically say that those numbers were accurate. Scroll back up to the "Stormi" floral arrangement. Do you see how it only takes up space on Jenner’s table? If you wanted to completely fill that space with roses, you’d easily have to get 10 more of those arrangements, at the very *minimum*. On the low side of things, that means that an entire room would run you about $39,000, and on the high side, you’d be looking at $51,000. Considering there’s less of an "arrangement" factor to fill your home with regular bouquets (as opposed to intricately arranged letters), you’re probably looking at the lower end of that range.

So if you have $50,000 lying around, go ahead and fill a room with roses to impress the heck out of your significant other. For the rest of us, a simple bouquet will just have to suffice, unless you feel like spending the cost of student loans on flowers. Totally your call.