This year, Bustle is celebrating Rule Breakers — the women and non-binary individuals among us who dare to be themselves no matter what. In the lead-up to our list of Bustle’s Rule Breakers of 2018 going live in late August, we are featuring stories from an array of individuals about critical moments when they didn’t do as they were told. In a world that encourages us to conform unquestioningly, they refused to look or act the part, and we’re all better for it. Click here to buy tickets for the event.

I am not what most people picture when they think of the title "film director." I still sometimes come across behind-the-scenes photos of myself from the set of BLAME — my first feature film, which I wrote and directed at 20 years old—and think, look at this child! Surrounded by a crew of professionals, many in their 30s and 40s, I look like a high school student, with a shooting script in my hand, sharpies strung around my neck, and an expression of intense concentration on my face. At the time of shooting, my worst fear was letting anyone in on the fact that I had no clue what I was doing (which is to say, I had never directed a feature film before)— despite the fact that it would have been ludicrous to expect me to.

I knew what I wanted, certainly. I had a very specific vision. I prepped within an inch of my life — BLAME gestated over the course of five years before we began principal photography, in which it was obsessively rewritten, storyboarded, look-booked, designed, discussed over countless family dinners, and fantasized about. But I was new to every single thing I attempted, learning as I went along and trying my best not to be scared half to death.

The odds of pulling off the ridiculous feat of making a movie with no money and no other producer besides my mom (who, for background, also had no producing experience outside of my previous short film, Till Dark) were undoubtedly stacked against me. I was an 18-year-old girl who should have still been in high school (I graduated early) when I first started pitching the film. I had minimal experience behind the camera (a short film, plus a handful of high-school and middle-school projects made for budgets of approximately two dollars) and no famous family members to back me up — just a script, a family that supported my crazy dreams, and a lot of opinions. The only real thing I had going for me credibility-wise was my few connections as an actress (I had been working professionally since I was a kid) and you better believe I used every. Single. One of them. 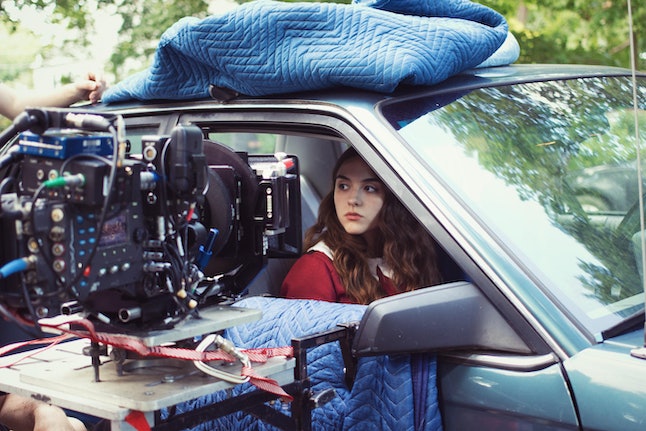 Understandably, a lot of people advised me not to attempt to make BLAME in one way or another — insisting that doing the film instead of going to college would be a mistake, that 90 percent of indie films with teams far more experienced than us never get made. In our attempts to get it off the ground, BLAME was rejected from every single grant application. Producers and crew dropped off the face of the earth. I was told, repeatedly, this doesn’t happen. People don’t just do this. When we finally found someone who agreed to back the project — a director I’d worked with in the past — securing our financing with a commitment of $250,000, he ghosted during the shoot and never wired us a dime (or so much as texted a “Sorry”). It was never, ever, easy. But we kept pushing through it. And in the end, all of that adversity shied in comparison to the support I did receive.

Time and time again, cast and crew members, neighbors, agents — people reconsidered and took chances on me, because they saw how much passion was driving the film forward. They, too, started to believe in the crazy thing I was doing. They saw that by merely trying to make this film, I was rebelling against an industry that wasn’t very open to directors like me. 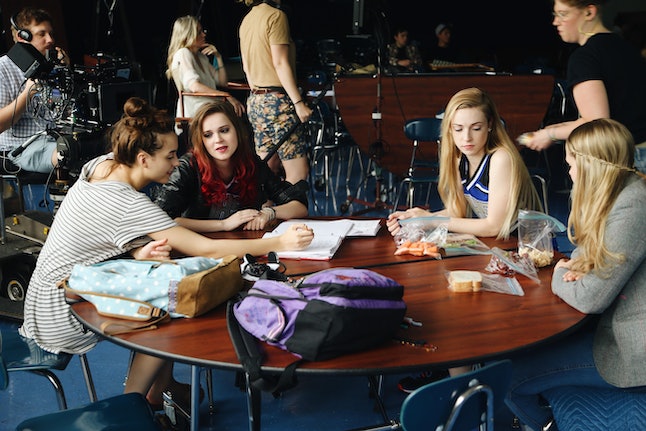 We may not have been selected for a grant from Panavision, but a young female representative in the New York office took it upon herself to champion my film and get me a camera package at an incredible price. The well-known and extremely talented actor Chris Messina, who knew nothing about me outside of the (very nerve-wracking for me, likely amusing for him) one coffee meeting we had in LA, took a chance on an insanely low-budget film shooting in central Jersey with a girl who barely looked older than 16 directing. Nadia Alexander (BLAME’s Melissa, who is also fantastic and won Best Actress at Tribeca Film Festival) did a variety of absurd things — including sleeping on a mattress on my floor, Saran-wrapping her dip-dyed hair while she showered, penning a massive character bible and writing my closed captions for me — to help us pull this off.

My badass dad took on a third job to help my parents contribute to the budget of the film (which was mostly comprised of my college funds —money I had made as an actress that my parents had saved up). And, of course, my Super Mom literally gave up her life for years to work with me. She was there every single step of the way, even when people told us we were aboard a sinking ship, even when we weren’t sleeping and there were 15 people staying in our house and we had no money and everything was a mess, she made it work in the end. For that, and for all the support, I am forever grateful. 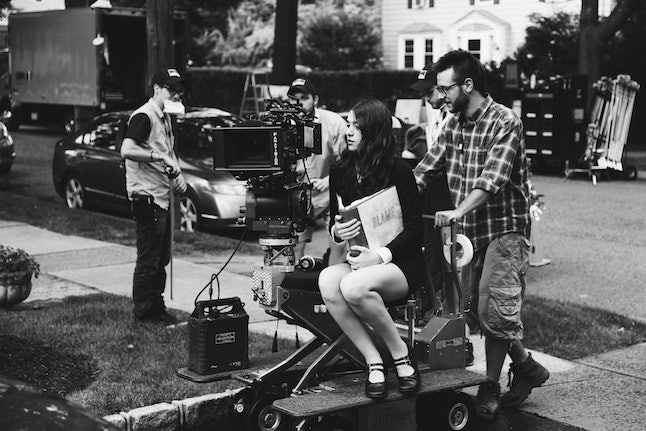 So now, three years later, I have embraced the fact that I’m new to, well, pretty much everything I’m doing. I no longer try to hide my naiveté, because it makes it a lot harder to learn if you’re afraid to embarrass yourself. I may have a gut instinct and a vision that I do my best to follow, but that’s far from all it takes to be a filmmaker — anyone in this business knows there’s always a ton to learn and a voice in your head telling you you’ll never be able to catch up. But I’ve chosen to be grateful for this.

The fact is, at this point in my life, the only voice that consistently tells me I “can’t do this” is mine. And that actually makes me pretty damn lucky. I’m a 23-year-old girl. Creating film and television! Based on the films I’ve watched and the articles I’ve read, I should probably have been poked fun at, or told to change the female leads of my current projects to straight white men a dozen times by now. But actually, I haven’t. Which I think means, maybe, this industry is finally making some progress, and opening its mind to the fact that there’s room for someone like me — for someone like ALL of us.

Just as I am new to my job, our industry is brand new to giving a sh*t about how women and minorities are treated. Maybe it’s too early to get my hopes up, but I’m going to anyway. In light of the recent uprooting of gross patriarchal madness that has been running Hollywood for way too long, I truly believe that my generation may be the very first to see a version of this industry where discrimination and harassment are taken seriously —and therefore, maybe we won’t be subjected to as much trauma as all the people who came before. 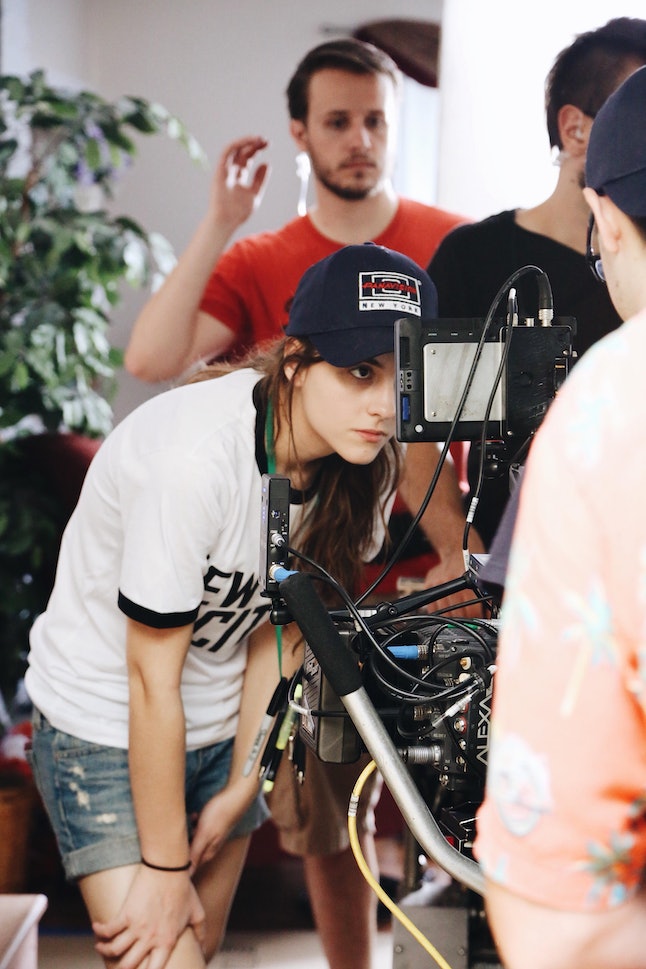 There is a constant sense of pinching myself, looking back over my shoulder, and calling myself lucky at every opportunity I am given, because I am truly reaping the benefits of a movement that began long, long ago. Now, we may be far from where we need to be, but I know full-well that today, the only reason I am able to sell scripts with complex, unconventional, challenging, diverse women at the helm is because of the work that so many have put in. I can only hope that my art, in turn, supports that wave of change, and buoys up those around me.

Truly, I think everyone deserves role models who look like them. I hope that for future generations, the image that comes to mind of a director is genderless, ageless and impartial to sexual orientation or socioeconomic status. At the end of the day, they’re just a person with a passion for film and a lot of opinions! And that can be anyone, right?