Stepping through the silver screen! Student recreates scenes from his favourite films including Chitty Chitty Bang Bang and Harry Potter by taking clever snapshots at the real-life locations

A movie fan has been visiting his favourite film locations and taking snapshots to recreate the scene through photographs.

In the last 18 months, London-based Thomas Duke, 20, estimates he has travelled to over 150 film locations to take the clever pictures.

The film student posts them to his Instagram account (@SteppingThroughFilm) along with a story behind each – and his creativity is admired by over 15,000 followers.

‘The idea has always been in my head. I just love exploring places and linking that with my passion for film,’ he told the BBC. ‘I always want to visit the scenes that mean the most to me. I can visit the places that I’ve only seen on screen.’

When Thomas was younger, he would wake up every day at 5am and watch classic films, like Mary Poppins, Bedknobs and Broomsticks or Chitty Chitty Bang Bang.

The film company used six cars throughout the making of the film, but only one that is functioning – and it is now owned by Peter Jackson, the director of Lord of the Rings and The Hobbit.

‘Stepping through this tranquil little village in Turville, Buckinghamshire was absolutely surreal. The same buildings were still standing after 50 YEARS! I truly couldn’t believe it. Anything is possible if you have a flying car and a dream’ 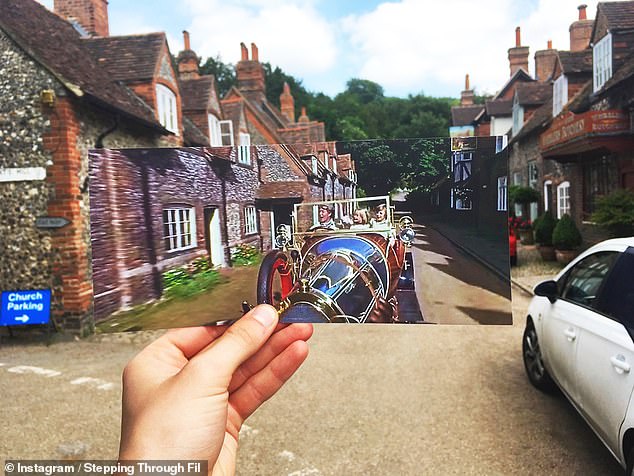 This particular scene of Wonder Woman was filmed at the majestic country home Hatfield House in Hertfordshire, which is also the set of The Favourite (2018) and Paddington (2017).

Thomas believes the film helps him appreciate time, saying: ‘The film makes us appreciate the time we have in the present because sooner or later it’s gone and then we all wished we had more time.’ 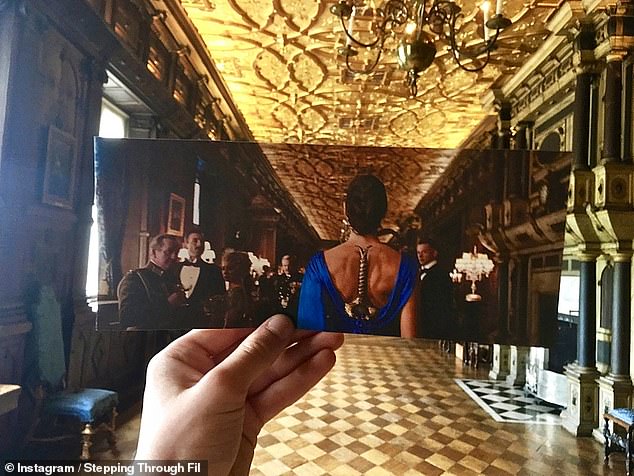 HARRY POTTER AND THE DEATHLY HALLOWS (2011)

This particular scene from Harry Potter is a particularly emotional one for Thomas, as it is set shortly after Harry’s house elf companion, Dobby, dies.

The 20 year old says that, not having read the books, he was shocked by the scene, and wanted to  pay it homage by travelling to the location where it was filmed.

The Freshwater West beach had been on his list of places to visit for a long time, but due to the long distance, it had taken him a long time to get there.

He said: ‘Phew. What a whirlwind… of emotions and wind. Beaches are very windy indeed. I’ve wanted to visit this beach for so long but it was just such a long distance I never could. Until I decided that there was no better time than the present and it was beautiful.

‘There was never going to be much to “line up” with this scene, it was all about the context and what happens. I’d never seen the hillsides of Wales until this weekend, I’m so lucky to have finally witnessed the glory they hold!.’ 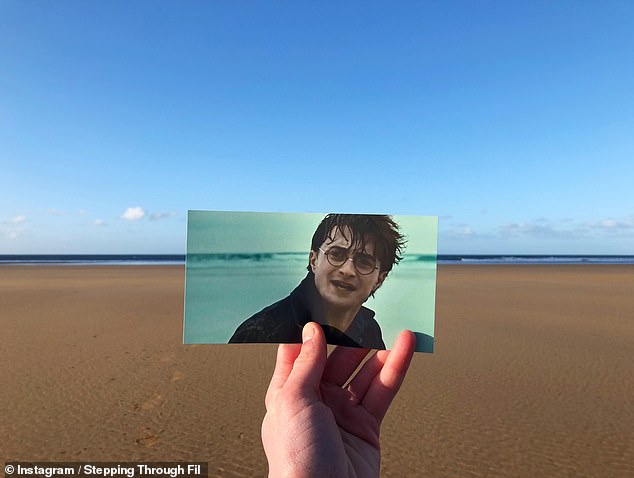 ‘What a whirlwind of emotions and wind’: Thomas says that Freshwater West beach in Wales had been on his list to visit for a long time

The tube scene from Skyfall took a little intricate planning to get exactly right – it required Thomas figuring out the right tube line, and then finding a train which matched the correct coloured yellow poles.

Luckily, he was able to identify that it was the Jubilee train. in the film, Bond enters a train at Temple station, but they actually filmedusing the disused Jubilee line platform at Charing Cross station.

He says that the film is always a worth one to explore, with many iconic moments filmed in London.

‘Patience is a virtue!’ he says ‘After that it was just a case of waiting for the train to stop at each station so that I could steady and line it up accurately! Well, as best I could anyway.’ 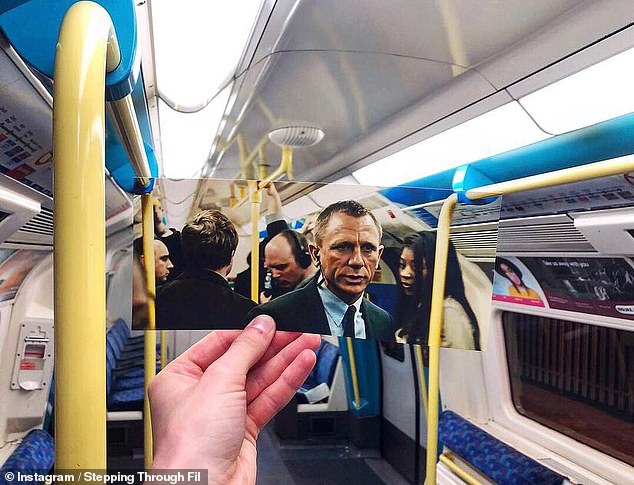 Wishing to pay homage to the soilders who passed away at Dunkirk, James took to the beaches to find the filming locations from the blockbuster.

The film crew used various parts of the beach to film, but most of the bulk of it was at one end.

They built a long pier-like structure going into the sea, called The Mole, for the film and Thomas explains: ‘The picture I’ve included of it here is in pretty much the same place but of course the white structure is no longer there. 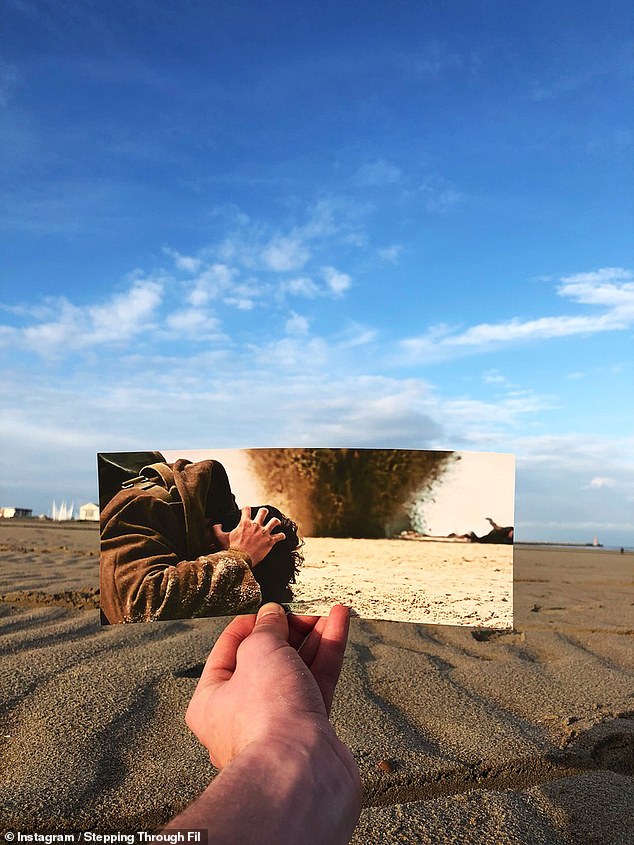 He says Turing is a hero of his, writing:’ Inspiration seeps through The Imitation Game (2014)… Cumberbatch is absolutely sublime and portrays Turing so elegantly, I fell in love with the film the second I witnessed it.’ 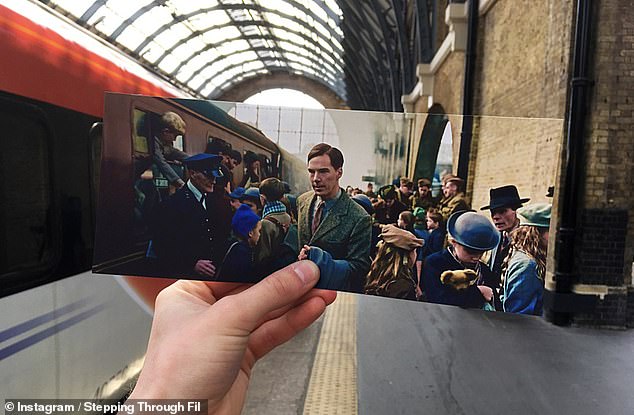 ‘Inspiration seeps through The Imitation Game (2014)’: Thomas was able to share this perfect lineup at the modern Kings Cross station in London

He describes finding the scenes with Alan Rickman in particularly moving, writing: His arc in the film is really emotional seeing as he’s no longer with us. At least it reminds us of the bright spots one can bring.’ 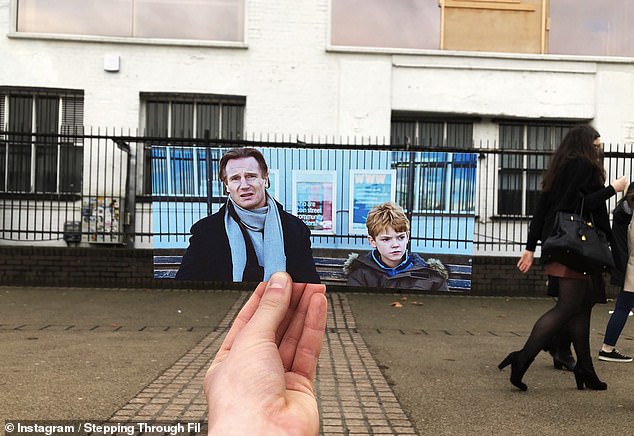 One of the most iconic sights in London, and perhaps one of the most recognisable from movie scenes, is tower bridge. Thomas shot this particularly snap at Sunset, because he didn’t want a pitch black background.

‘I want to capture the sunset behind Tower Bridge and the glow behind the clouds. It was a little experiment as the colours of course didn’t work amazingly due to the contrasts but I wanted to give it a go!’ 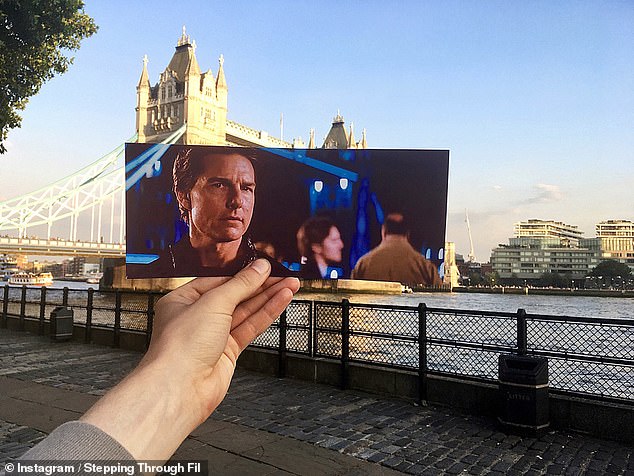 Describing the film as a phenomenon, Thomas acknowledges this film was a huge feat to accomplish back in 2012.

‘The cast is sublime and the ambition of singing the entire running time LIVE has always made me appreciate the authenticity in the whole production. It’s a just a beautiful cinematic achievement!’ the 20 year old says.

He had to try ‘a lot’ of shots in order to get the perfect one for this scene, as he says the crew must have used a very wide lens to get the perspective correct. 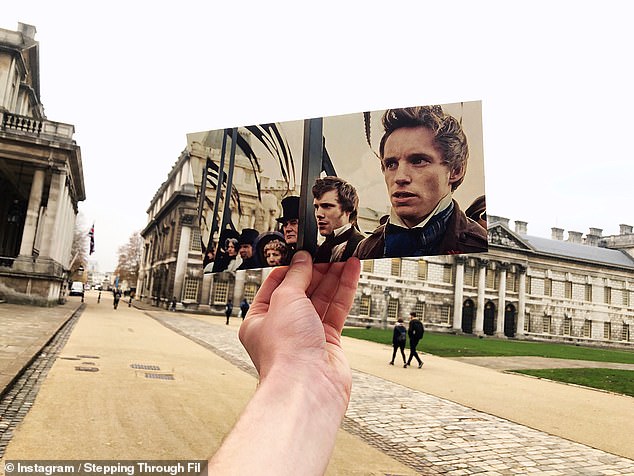 ‘Can you hear the people sing?’: Thomas struggled to get the perfect shot of this Les Miserables highlight, as he believes the film crew used a very wide camera lens in order to film the piece

Thomas praises the Edge of Tomorrow for repeating a tired concept and doing it well, praising the visionary director and badass heroine for the ‘captivating watch’.

This scene was filmed at the Ministry of Defence in London, which Thomas said made it incredibly difficult to shoot because it is a secure, governmental building.

‘But after much patience I finally captured it! I’d waited SO long to create this shot and now I’m so happy that I can add an Emily Blunt scene to my collection.’ 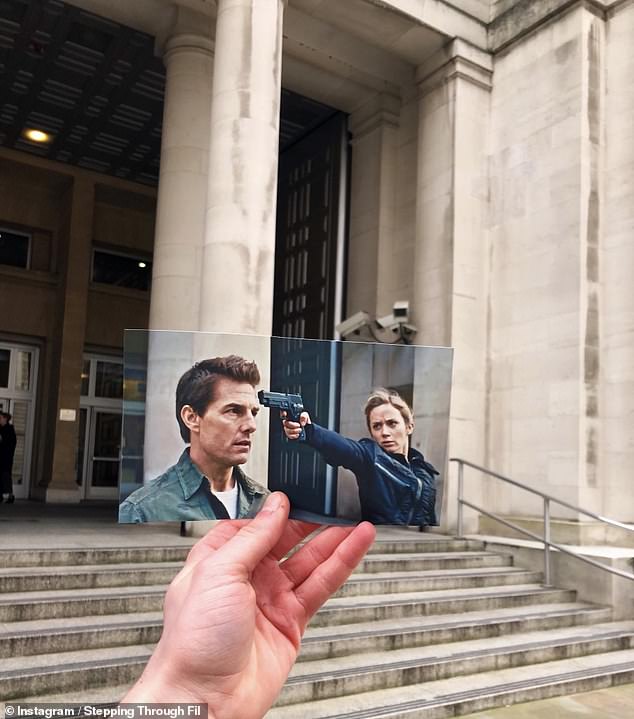 Patience was required to get the perfect shot from Edge of Tomorrow, with Thomas spending a long time standing on the stairs of the Ministry of Defence in London

Filmed in part at the University of East Anglia in Norwich, this scene from Avengers: Age of Ultron provides the last moment Tony and Stvee share a sense of semblance before the dramatic events of the Civil War.

Thomas says: ‘Visiting this place was magical. Following in the footsteps of the Avengers was so surreal!’ 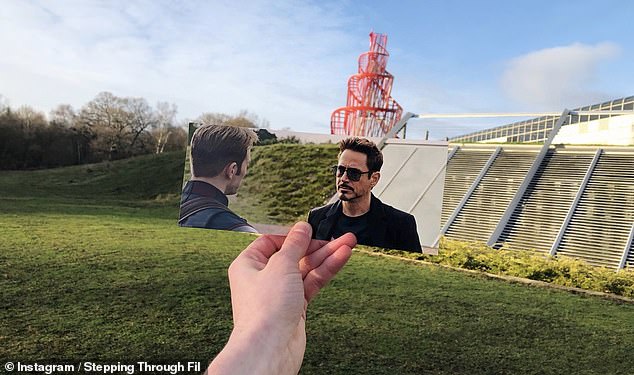 ‘Visiting this place was magical’: filmed at the University of East Anglia, Thomas says walking in the footsteps of The Avengers was ‘so surreal’

Oxford University provided the home to many Harry Potter locations – in fact, Thomas believes it is the closest thing to walking through the real Hogwarts!

He says that he chose this particular scene from The Goblet of Fire, in which McGongall teaches the students how to dance, because of its personality.

‘Amongst all the magic, mayhem, wonder, and illusions it’s a scene that’s full of one word: humanity.’ 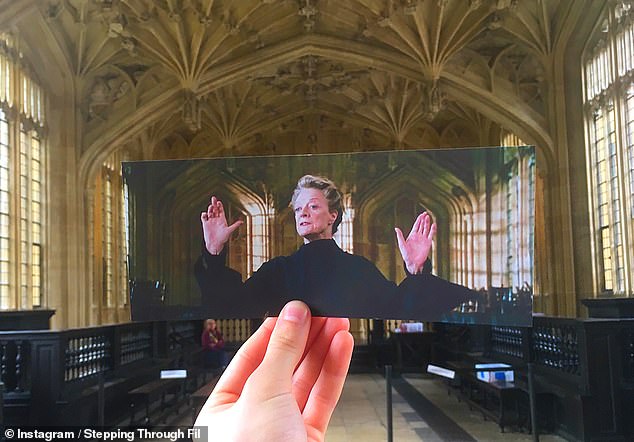 Famously, much of Harry Potter was filmed in real life locations, like Durham cathedral and, like the scene above, Oxford University

Thomas took to the garden city of Welwyn to take snaps of this comedy movie, and said he fell in love with the place while he was there.

‘Memories to last forever! This film resonates with me on so many levels – the layers within the characters and story are so inspiring.’ 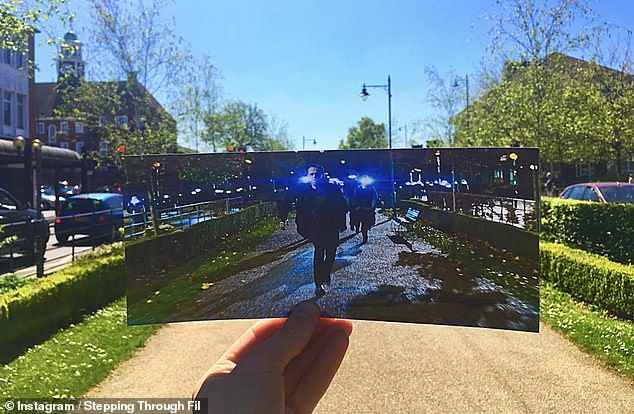 Thomas says that the layers of friendship in The World’s End resonate with him, and that he fell in love with the garden city of Welwyn where this scene was filmed