Could YOU carry off a quiff? How the daring ‘pompadour’ hair-style has seen stars including Emma Willis, Kristen Stewart and Vicky McClure go for the chop (and the expert hack for keeping it in place)

2019 is barely three months old and the hottest hairstyle of the year looks like it’s already a done deal.

Awards season has seen a slew of leading ladies sporting the ‘pompadour’, a daring shorter haircut that boasts a voluminous quiff.

If Tilda Swinton and global pop icon Pink have been faithful to the look for a while, there have certainly been more than a few converts to it in recent months. 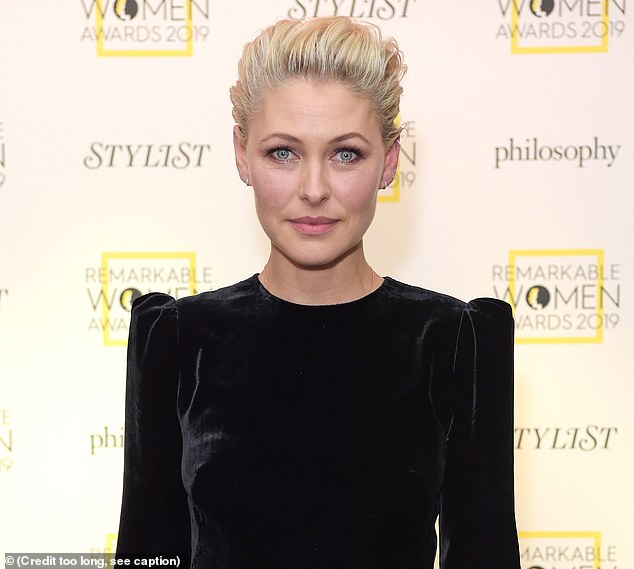 The Voice star Emma Willis has mastered the ‘pompadour’, a high and proud quiff inspired by Madame de Pompadour, a mistress of King Louis XV that is enjoying a 21st century re-birth Actress Tilda Swinton has long since favoured a quiff, and wears her blonde locks short at the sides and high on top (pictured at the Sitges Film Festival in 2018) 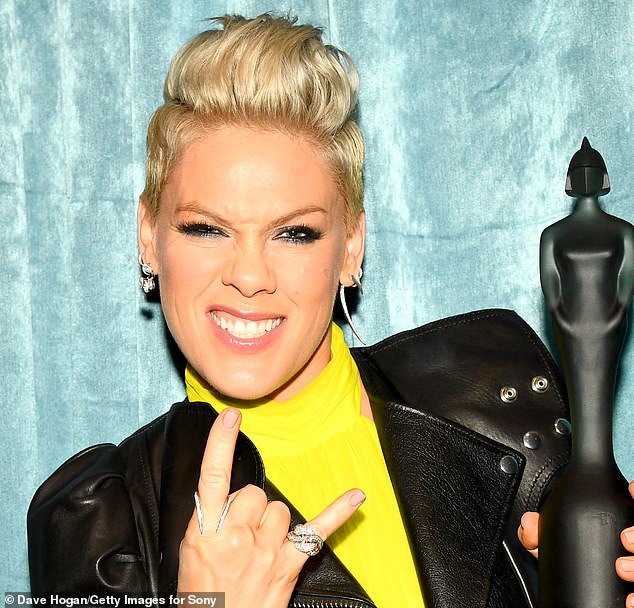 Brit Award winner Pink, like Tilda, has long been a fan of a short sides, long on top look and has seen it race back into fashion in recent months Kristen Stewart, famous for her long brunette locks in the Twilight movies, has shown off a punkier version of the pompadour in recent weeks, with a dash of peroxide helping the ‘rebellious’ look along 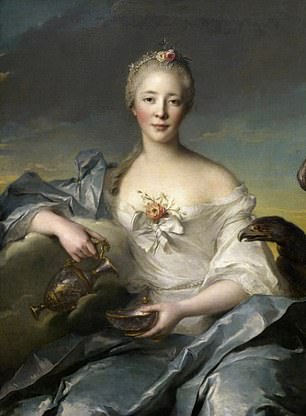 The Voice presenter Emma Wills rocks a glacial, platinum blonde version while Line of Duty actress Vicky McClure is wearing hers high, with a flick to the side.

While Hollywood darling Kristen Stewart has frosted tips in her quiff, Dame Kelly Holmes has gone for a closer shave at the back and sides, with height at the front.

‘However, the quiff has evolved and the latest incarnation might look more to Elvis Presley than Madame de Pompadour.’

She adds that the men wearing it, including R ‘n’ B star Bruno Mars and Zac Efron, have tended to add some ‘top-heavy pomp’, something women wearing it are also following.

So what is the look inspired by, and how easy is it to carry it off?

Natalia Maxwell Ager, Artistic Director at Malcolm Murphy Hair, told Femail that the look has its roots firmly in the history books.

She says: ‘The hair quiff, officially named ‘The pompadour’ was inspired by Madame de Pompadour, a mistress of King Louis XV in the 18th century.’

HOW TO ACHIEVE THE PERFECT POMPADOUR QUIFF

Natalia Maxwell Ager, Artistic Director at Malcolm Murphy Hair reveals how to create your own pompadour… Quiff king: Elvis Presley may have had the most famous version of the haircut but the latest incarnation has its roots firmly in history 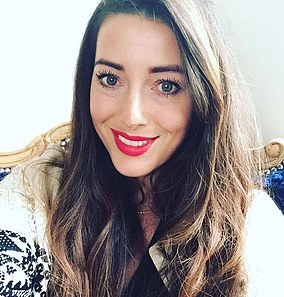 Top stylist Natalia Maxwell Ager says oval and angular faces suit the look best but ‘if you wear it with confidence, anyone can look fierce’

1). On damp hair, run a good mousse ( I like L’Oréal Techni Art Volume Lift through the hair

2).  Use a small, flat brush (Denman is a good one) and brush your quiff into shape

3). Using a hairdryer, blow the quiff in the direction you want it to sit

4). For a textured look, like Emma Willis is wearing at the moment, hair product company Davines do an amazing wax called ‘This is a strong dry wax’. If you want the quiff to be more set and obvious, then hairspray will do the job

5). The key element?  Put the hair dryer on a low-speed setting and blast the hair into shape this way – the hairspray/wax acts as a light glue and will really hold that pompadour in place! 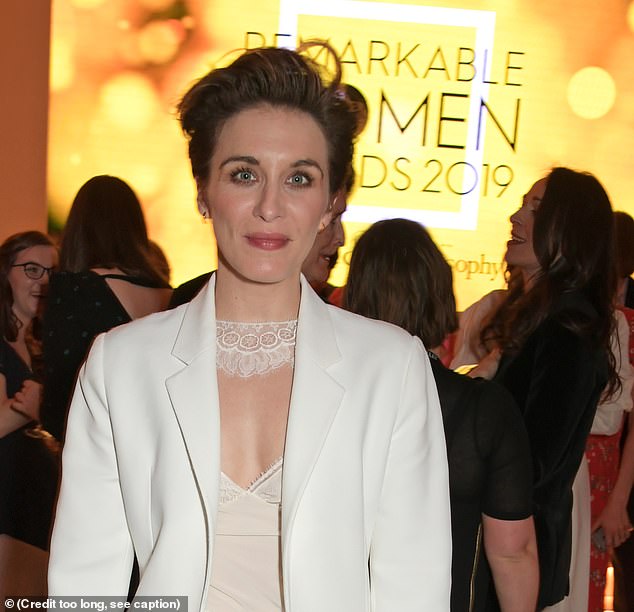 Line of Duty star Vicky McClure wears hers in a more relaxed style, neatly coiffured to one side 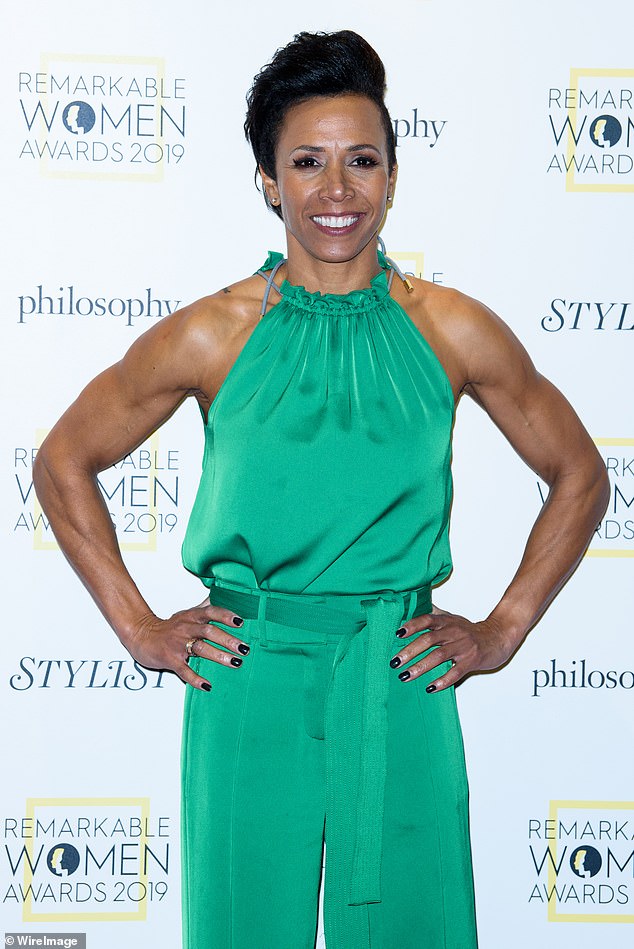 A different take: Dame Kelly Holmes also sweeps her locks to the right, with one side of her head cut shorter than the other 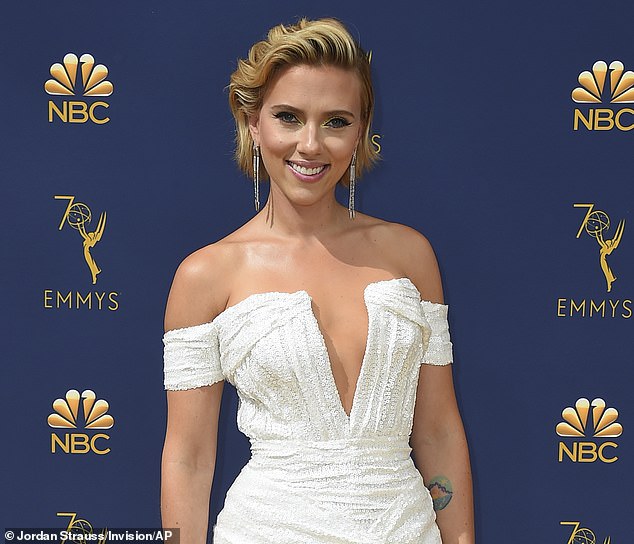 She wears it well: Hollywood A-lister Scarlett Johannson has perfected the pompadour

‘I definitely think Scarlett Johannson wears it well, opting for the stronger, more masculine side quiff.

However, Emma Willis shows that you can also sport it with a girly slant, opting for softer styling and with keeping all the length on top of the hair.’

‘And, of course, it’s the perfect cut for a gender neutral world’.

And, according to the top stylist, those with oval or angular shapes naturally wear it best but, says Maxwell Ager, ‘if you wear it with confidence, you’ll look fierce no matter what’.