Nine Britons and an American had just reached the highest point of the Tian Shan mountains on a guided tour in Kyrgyzstan when the sound of deep ice cracking could be heard.

It was the sound of an ancient glacier dying.

British tourist Harry Shimmin took this video of an ice avalanche caused by a glacial collapse, while he was walking in the Tian Shan mountains in Kyrgyzstan.Credit:Instagram – harryshimmin

As the snow rushed towards British tourist Harry Shimmin, it got more difficult to breathe and he thought he might die. Shimmin’s video, which went viral, shows him taking shelter behind a rock, moments before the wall of ice hit. He and his party survived.

The incident was the second glacial collapse this week, but, as record low sea ice was observed in the Antarctic last month, global temperatures soar and ice sheets melt, it raises the question of what the world could look like as its ice retreats.

Antarctica has lost roughly 3 trillion tonnes of ice since the early 1990s. If the current melting trend continues, the regions will be on track to match the “worst-case” scenario predicted by the Intergovernmental Panel on Climate Change of an extra 17 centimetres of sea level rise by 2100.

The Antarctic Peninsula is one of the warmest oceans in the region which, if the ice melts completely, could contribute to 25 centimetres of sea level rise, while sea levels could rise by 60 metres in the whole Antarctic region.

Ice sheets in west Antarctica, such as Larsen A and Larsen B, have collapsed in recent years. Both collapsed in the past two decades after a series of warm summers.

As waters in the Antarctica Peninsula warm – increasing by 2.5 degrees since 1950 – Dr Kyle Clem, a climate scientist at the Victoria University of Wellington, was worried that the remaining ice shelf – Larsen C – could face a similar fate.

Scientists have been baffled as to why the Larsen ice sheets were melting. They knew high air temperatures were causing surface ice to melt. They knew the water would trickle into the cracks in the ice sheet, expand as it froze and break off the ice. But what they couldn’t figure out what was causing the warm temperatures.

Clem studied 25 years of data that showed the worst surface melting occurred when intense atmospheric “rivers” – concentrated ribbons of water vapour moving within the lowest three kilometres of the Earth’s atmosphere – swept through the area. 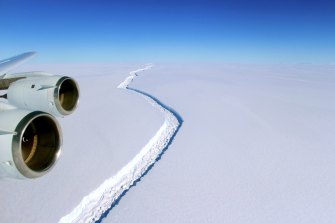 In 2016, a huge rift developed in the Larsen C ice shelf, and a giant iceberg broke off.Credit:NASA/AP

His research, published this week in Nature Communications, found these “rivers” were caused by air circulation patterns and thunderstorms originating from the region east of Fiji in the tropical Pacific Ocean. These “rivers” are responsible for driving a number of climate events, including increasing high-temperature extremes and ice melt when they move over the Antarctic Peninsula, or exceptionally heavy rainfall, such as the weather event that smashed NSW last week.

He said that scientists previously thought the ozone layer could be behind the melting ice sheets, but his finding could help researchers predict future melting events in the area.

“There are about five or fewer atmospheric rivers that exist any time across the world and they are responsible for transporting up to 90 per cent of moisture in the tropics to higher latitudes,” he said.

“When there is the increasing intensity of atmospheric rivers, this can lead to new extremes and that can look like extra precipitation, such as the catastrophic flooding we’ve seen over Australia and more extreme warm temperatures in Antarctica.”

Meanwhile, the extent of Arctic sea ice last month was 8 million square kilometres below the 1981 to 2010 average, which is roughly the size of Sweden, Norway and Denmark combined. It comes as June’s average global temperature was the sixth warmest on record.

He added that, in some areas, grasses typically found on golf courses had started growing, while crabs from warmer regions had migrated.

“The prospect of all the ice melting is not imminent and it may never happen,” he said.

“The projected sea level rise by the end of the century is about one metre … but we commit ourselves by the decisions we make in the next decade or so to changes that will be irreversible. If we don’t act soon to slow greenhouse gas emissions, we risk crossing a threshold where the ice sheet starts to retreat and, once it starts, we can’t stop it.

“We can’t decide in 50 years we don’t want sea level rise. We make that commitment now.”