"It started three years ago," says Serena*, 47. "My husband, Dom*, told me he was thinking about quitting his job as a company director, and launching a start-up making artisan chutney."

Mindful of having two children at a private school and a large mortgage, Serena persuaded him to try it as a hobby first. "It didn't work out, but then he spent his Christmas bonus on a blingy racing bike." 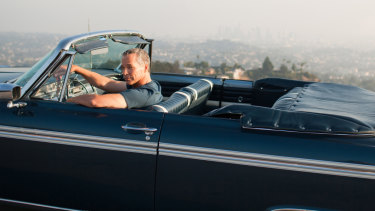 Sheela Mackintosh-Stewart: “A midlife crisis can hit from the late 30s, often slowly over time, so it is important to be alert to any odd or rash behaviour.”Credit:Getty Images

Worried by Dom's uncharacteristic behaviour, Serena confided in female friends. "They were pretty sure it was a midlife crisis and shared stories about despair, divorce and husbands who had run off with nannies."

When she tried to discuss it with Dom, he refused. "He was defensive, and I felt very alone and scared about the future. I suspected the next stage was probably an affair."

Eventually, Serena persuaded Dom to open up. He insisted he wanted to stay with her and get through it, and on her suggestion, agreed to see a therapist, because a number of the symptoms of a midlife crisis align with those of depression.

"The therapist helped him see that he had been living his life ticking boxes – good job, nice house, holidays twice a year – and he didn't feel it was his true self."

She says the crisis was partly to do with approaching the big five-0. "It's a significant milestone for many men and is a time when some become keenly aware of their own mortality," explains psychologist Meg Arroll. "This can result in a profound sense of turmoil and confusion as life may not have turned out as envisaged."

Serena admits that she struggled during the whole period. "Although I knew Dom was unhappy, I felt he was being selfish. I used to lock myself in the bathroom and cry a lot. I did see a therapist myself a few times. We talked about the impact Dom's crisis was having on me and the children, and coping strategies like self-care, but actually, discussing it just made me angrier. Looking back, what really got me through were my female friends who were experiencing something similar. A few of them split up, so I feel fortunate that I rode it out."

Therapy did help Dom, and now, Serena says, "He has stopped all the 'young again' nonsense, and we're downsizing so he can take a step back at work. I'm glad I saw it through with him, but I don't envy any woman whose husband has a midlife crisis."

And there are many. In a recent study of 1000 males aged 40 and above, a third said they had lost their "spark" and 58 per cent felt they had gone through a crisis of some sort. On average, the crisis lasted around two years and the most common age of onset was 47, according to Arroll, who conducted the study.

There is good reason for the cliché of a middle-aged man buying a red sports car. A third of men used spending to deal with their feelings, Arroll's study found. Popular items included – you guessed it – sports cars, motorbikes and tattoos. One man even bought himself a python.

Celebrities aren't immune. Witness Ben Affleck's massive back tattoo of a phoenix rising from the ashes (acquired aged 43). And then there's Johnny Depp, who at 49 split from his partner of 14 years, Vanessa Paradis.

"I didn't buy a multicoloured Maserati or Ferrari," he said, referring to that time, but admitted, "I don't think we have a long enough piece of paper to name the things I inflicted upon myself during my midlife crisis, but I will say it was called self-medicating."

If you suspect your partner is heading towards a crisis, lawyer Sheela Mackintosh-Stewart, who is also a relationship counsellor, suggests avoiding asking questions such as "Why are you behaving like this?" or "Is there someone else?"

Mackintosh-Stewart says these kinds of questions will make him shut down. "Instead use phrases like, 'I can see you're struggling. Tell me how I can help.' He may just need space."

But what about your own needs during this time, particularly if you are also caring for children and elderly parents? "It's easy to feel defeated and destabilised, so it's vital to take care of yourself mentally, emotionally and physically, and set to clear boundaries and expectations."

While there are plenty of self-help books, apps and therapy courses for men, there are very few resources for "crisis spouses" who often find themselves struggling as a result of living with a suddenly changed and distant husband.

"For these partners, burying their heads in the sand and waiting for the worst to happen is not an option," says Mackintosh-Stewart. "A midlife crisis can hit from the late 30s, often slowly over time, so it is important to be alert to any odd or rash behaviour."

Of course, sometimes it's too late. Emma Olsson, 52, discovered on her 14th wedding anniversary that her husband Nick was having an affair. "He'd been short-tempered for about a year and I had put it down to job stress," she says. "Eventually, I checked his phone. It turned out that he'd reconnected with a woman he'd dated as a teenager, and they were having an affair. He was a deeply loyal family man so I couldn't make sense of it."

It was only when Emma searched online for information that things fell into place. "There were so many stories from women whose husbands suddenly became someone else. These men were all high achievers, had experienced childhood trauma and had an emotionally unavailable parent. So the child is taught to suppress emotion, and finally, at midlife, it all bursts out."

Psychologist Dr Hamira Riaz agrees this is often the case, particularly for men who have enjoyed financial success and status. "In adolescence, men think they're creating an identity for themselves but it is highly influenced by family, cultural and generational factors. It is essentially someone else's script. By midlife, that script is redundant and they have to write their own – a very scary prospect."

For partners subject to this emotional earthquake, finding solid ground can be difficult. Emma says that while she was desperately hurt, unpicking the reasons for her husband's affair helped her when their marriage ended. "Understanding that this was a midlife crisis helped me to realise that it wasn't about me. He left and I had to focus on the children but though it was hellish at the time, I'm far happier now."

However, Dr Riaz points out that for those couples who come through the other side, their marriages can actually end up stronger. "There is often a period during which couples need to revisit their inherited ideas about love and intimacy," she says. "It is a fruitful experience and the rebooted marriage will be a healthy vehicle for them to grow into old age."

This was the case for Serena. "It made us weigh up whether we wanted to be together. Now we're more honest and more secure because our marriage has been tested."

* Names have been changed.

– Low-level dissatisfaction with life that continues for months without resolution.

– Opting out of social gatherings.

– Lack of interest in sex that's not due to illness or worry.

– Bouts of nostalgia for the past – looking up old schoolfriends and speculation on what ex-girlfriends are doing.

This article appears in Sunday Life magazine within the Sun-Herald and the Sunday Age on sale April 7.