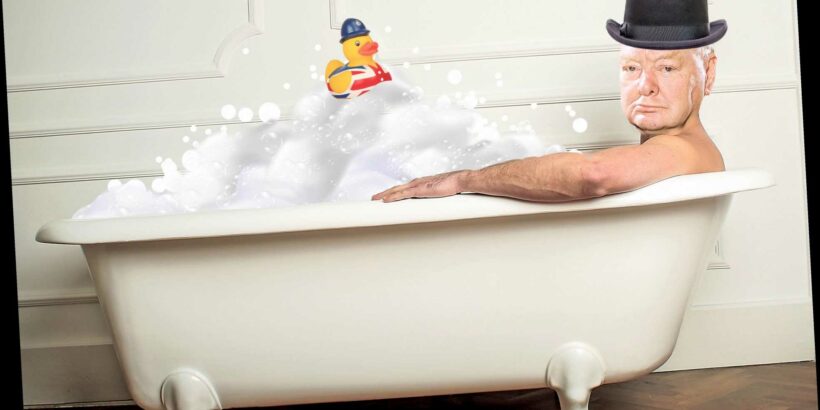 The most unlikely beauty influencer of 2020? That would be Sir Winston Churchill.

Britain’s bath-loving “Bulldog” of a prime minister died in 1965, but his love of Brown Windsor soap recently set off a market bubble for the sudsy stuff.

At first, purveyors were mystified as to why the Victorian-era variety also favored by Napoleon was flying off the shelves.

After all, even at $5.95 a piece, the highly aromatic soap had not exactly been a popular one.

“But Brown Windsor soap had become and still is a huge seller for us since the pandemic,” Gibbs told The Post.

Meanwhile, Deborah O’Shaughnessy, owner of Southampton Soap Co., went from selling 1,000 bars a year to 4,000 since COVID-19. “I’m getting orders of 10 bars of Brown Windsor soap at a time, and I was like, ‘What is going on?’” O’Shaughnessy said.

And Joe Rhile, owner of Cape May Soap Co., saw sales of his $7 bar swell 50 percent since the spring.

Turns out, customers had read Erik Larson’s New York Times best seller “The Splendid and the Vile,” a book about Churchill released in February 2020.

On Page 77, there is a small, seemingly inconsequential list of items Churchill’s wife, Clementine, ordered for their move to 10 Downing Street. It reads: “Wine glasses and tumblers (the whiskey had to go somewhere), grapefruit glasses … knives, jugs, breakfast cups and saucers … 36 bottles of furniture polish … and 78 pounds of Brown Windsor soap, a favorite of both Napoleon and Queen Victoria.”

If his steady leadership could guide Great Britain through the blitz, why not pandemic-weary readers through a schvitz? After all, Churchill loved bathing so much, he famously took meetings from the tub.

“I was in the middle of reading the book and saw the reference, so I Googled the soap,” Rucker told The Post. “I liked the story of Churchill and Napoleon using it. I have been to the Churchill War Rooms a couple of times, and I’m a bit of a history buff.”

On Gear Patrol, a male-centric site that reviews products, one contributor wrote that while reading the book, “suddenly I found myself wanting Brown Windsor soap, even though I had no idea what it was.”

My own mother, Dolores Fleming, ordered 8 bars as stocking stuffers from Cape May Soap after reading Larson’s book. “Churchill had strength, he had humor and he spoke his mind. I admire those qualities, and it’s almost like [Larson] was saying, ‘This is something he liked,’ and I wanted to try it. Plus, he liked to bathe, so I figured he knew something about soap,” she told me.

While soapmakers use varying recipes to make Brown Windsor, most contain lavender, bergamot, caraway, petitgrain, cassia and clove. It’s a strong-smelling combination said to be tough on germs.

“It’s made of aromatic essential oils because back [in the 1800s] people bathed less. They needed a headier scent, which of course isn’t a selling point today,” said Rhile. O’Shaughnessy adds clay to her version, which she said produces a lather ideal for shaving.

At Rucker’s suggestion, Gibbs sent Larson a batch to thank him for her new customers, which skew male. The author was shocked.

“I was truly tickled to get that letter and soap from the company and to learn of the association with my book,” Larson told The Post. “This is the first time anything in my career has caused a bump in consumer product sales.”

He added that he cannot be sure if it was Churchill or someone else in his household who used the soap.

But it has reinforced the writer’s love of “minutiae.”

Larson found the detail in the UK’s National Archives in a document from the Ministry of Works.

“To me, this stuff is really important,” he said. “What I was after in this book was trying to get a fine-grained texture of … what life was like during this period on a day-to-day basis. How did they get by? And these types of details really light the reader’s imagination.”

And it also moisturizes their skin.

Rucker — who used Dove bar soap for years — is placing his next order for four more bars.

“My skin gets really dry in the winter, and I’m finding it’s not drying as much,” he said. “The smell is distinctive, but the soap itself I really like.”