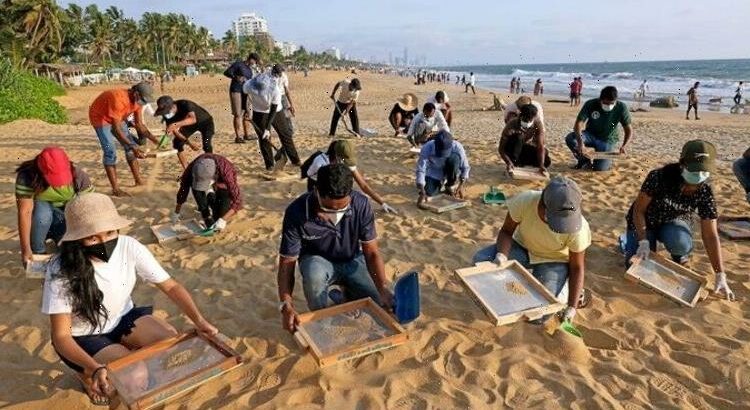 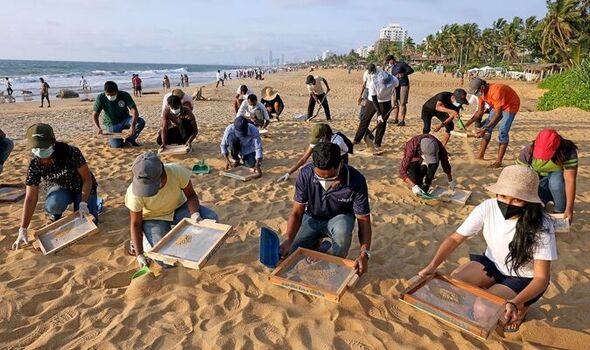 But they are a group of dedicated volunteers clearing the area of toxic pellets – known as nurdles – which washed up on the island’s beaches following the largest plastic spill in history.

The container ship X-Press Pearl caught fire and sank in May last year nine miles off the country’s coast.

The Singapore-flagged vessel spewed out 1,680 tons of plastic pellets – the raw material used in plastic products’ manufacture and called mermaid’s tears by volunteers.

The ship also shed 9,700 tons of other plastics and harmful chemicals. Its cargo included 25 tons of nitric acid, believed to have caused the fire.

Although the X-Press Pearl is out of sight at the bottom of the shallow ocean floor, it is far from out of mind.

Some 75 billion white lentil-shaped pellets, typically under five millimetres in diameter, spilled from the ship. They are now front and centre of the campaigning efforts of the youth-led Pearl Protectors.

It is impossible to avoid the nurdles when we reach Colombo’s Mount Lavinia beach, around 30 miles from the site of the 12-day inferno. Every inch of the golden shore is speckled with the mermaid’s tears eight months on from the maritime disaster. Photographer Jonathan Buckmaster and I joined an army of 26 volunteers who have taken matters into their own hands.

Teenagers, students and a Briton on holiday filtered plastic from the sand using aluminium mesh hand sieves. Others churned the lever of a trommel machine, a drum-like rotating strainer that filters the microplastics.

Therapeutic counsellor Stuart Green, of Cornwall, saw the rattling of sieves nearby. Curiosity got the best of him and soon the volunteers had gained another pair of hands.

Stuart, 64, described the nurdles speckling the beach as one of the biggest ecological disasters he had never heard of. He referred to them as “pretty” until he discovered their ugly history.

He said: “Plastic is taking over, with consequences we don’t know about in the health system for years to come.”

Stuart learned that nurdles are the little-known building block for all our single-use plastic products, from bottles to car parts.

They are gobbled up by more than 220 marine animals because of their resemblance to fish eggs. The microplastic has caused birds and fish to die from starvation, with pellets found inside some species washed ashore. Pearl Protectors co-ordinator Maleesha Gunawardana, 24, said she was shocked when the sand disappeared under mounds of “plastic snow” as the
nurdles washed up.

Co-ordinator Muditha Katuwawala added: “The reason nurdles are here is because of our consumption of single-use plastics. If our demand for this plastic was reduced, they would not need to be manufactured.” At the time of the disaster, Sri Lanka was under strict lockdown, meaning it was a few weeks before he was able to assess the full scale of the catastrophe.

Muditha added: “After six months of clean ups we decided to advocate towards a nurdle-free Lanka by calling for measures to prevent and prepare for nurdle spills.”

This problem is ever growing, says Dr Fay Coucerio

Plastics in the ocean are an extreme form of pollution with the equivalent of a rubbish truck full of plastic going into the world’s seas every minute.

Most of that will still be there in hundreds of years so the problem is ever growing.

The plastics cause all sorts of problems for the wildlife and the entire ecosystem. The large pieces, such as discarded fishing nets, can be a risk to animals such as dolphins getting caught and drowning. It can be eaten and block stomachs of whales, turtles, seabirds and fish.

The plastic can also carry dangerous chemicals and bacteria into the animals which are released in the stomach.

Nurdles are small plastic pellets that are transported around the world as the raw material to make nearly all the plastic we use. These end up in the ocean from spillage and mismanagement. They can be eaten in large quantities after a spill and cause irreparable damage. It can be tempting to assume this is a problem only in low income countries where waste management is handled differently to the UK. But the Great Nurdle Hunt suggests up to 53 billion nurdles could enter our oceans every year.

One study looked at the number of nurdles on beaches in Scotland that often showed hundreds of nurdles per square metre of sand.

Many of these were also covered with E. coli and vibrio bacteria which can be harmful to human health.