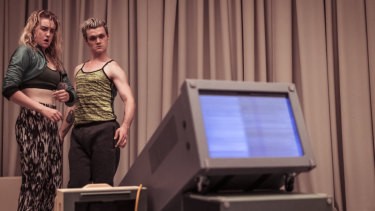 All of Antony Hamilton's works have a strong unified aesthetic, but his latest piece is truly a complete world, down to the smallest detail.

Walking into Universal Estate feels uncannily like interrupting an episode of Black Mirror – a dystopian capsule reality in which recognisable technologies and humans come together in a completely novel, terrifying universe.

And walking in and interrupting is inevitable, seeing that it's a four-hour durational piece, taking place in a closed room.

The space is sculpted with evenly dispersed artificial light and droning sounds reminiscent of the dial-up modem (designed by Hamilton with Matthew Adey, Paula Levis and Bosco Shaw), and furnished with large, computer-like objects with a number of screens tirelessly repeating shapes and patterns. It's reminiscent of the early 1990s and the nascent rave era. 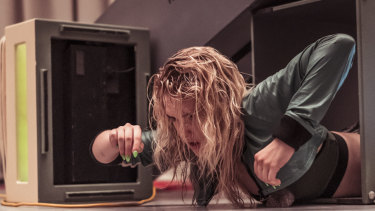 The work references technologies and rave fashion from the ’90s.Credit:Pippa Samaya

Moving through this lab-like space, as if trying to decode it, are two ape-like creatures, male and female (Cody Lavery and Kyall Shanks). Theirs is an attention without intent, focused but aimless.

They respond to objects: they are hypnotised by the screens, they climb and pile up objects, build forts and homes, get frustrated, tired.

Hamilton's choreography minutely – right down to facial expression – sculpts two bodies perched between primates and the specific physique of the English working-class early rave-goers: dayglo clothes, furrowed brow, rigid mouth, puffed chest, what my companion referred to as "tradie grunts". Lavery and Shanks embody it so completely they look like siblings.

The choreography seems to unfold for two hours and then fold back on itself, repeating in a palindromic structure and ending where it began. But watching them try is hypnotic. I stayed until closing, waiting to see who would win: man or machine.