A wife who criticised her husband for planning to leave her alone on Mother’s Day was shocked when other mothers told her she was the one in the wrong.

Writing under the handle ‘Rachael B’, the mother-of-two took to British parenting site Netmums to explain she was upset because her husband wanted to watch a football match on Sunday, leaving her alone with their two young sons.

She added that she hasn’t asked her husband not to go to the football match, but he keeps asking her if he shouldn’t go. 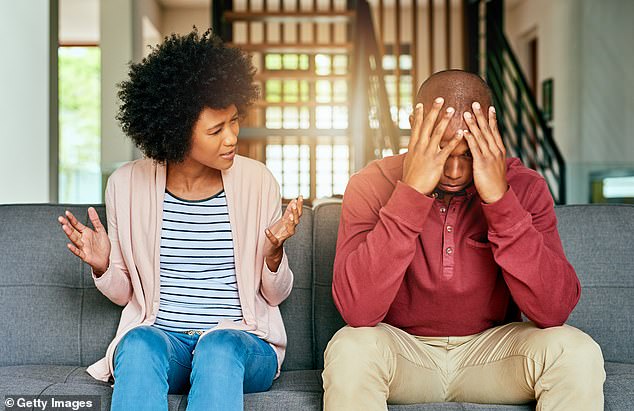 A wife who criticised her husband for planning to leave her alone on Mother’s Day was shocked when other mothers told her she was the one in the wrong. Stock image

Writing under the handle ‘Rachael B’, the mother-of-two explained she was upset because her husband wanted to watch a football match on Sunday, leaving her alone with their sons

The mother was expecting like-minded parents to agree with her, but was shocked when the majority of other users said she was overreacting.

One person wrote: ‘It’s only Mother’s Day! It’s not like it’s Christmas Day or he’s deserting you for weeks on end. Spend the day with your children and plan something fun for the three of you to do.’

Another said: ‘This may sound harsh but there will be other mother’s days but how many chances will he have to go and see his team play at Wembley?

‘I’d be tempted to buy him his ticket and call it his Father’s Day present and switch Mother’s/ Father’s Day or offer this and see what he says.’ 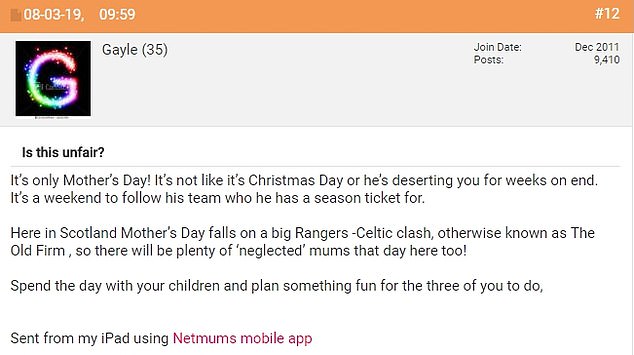 The mother was expecting like-minded parents to agree with her, but was shocked when the majority of other users said she was overreacting, pictured

Other parents urged the mother to focus on spending the day with her children as she would feel guilt-ridden if her husband doesn’t go.

One person said: ‘I would be fine with him going and certainly wouldn’t make him feel bad about it. You could always do something nice the following week or like another poster has said, swap Mothers Day and Fathers Day. If he didn’t go, you know he would be constantly checking the score.’

Another added: ‘Personally I wouldn’t stop him going, neither of the teams in that cup final get the chance to life a trophy at Wembley very often (no disrespect to either of them) and if your husband goes every week he is clearly a very dedicated fan, could you not celebrate Mother’s Day the following Sunday?

‘I know it sounds stupid but there will be a Mother’s Day every year, will he get this chance every year? 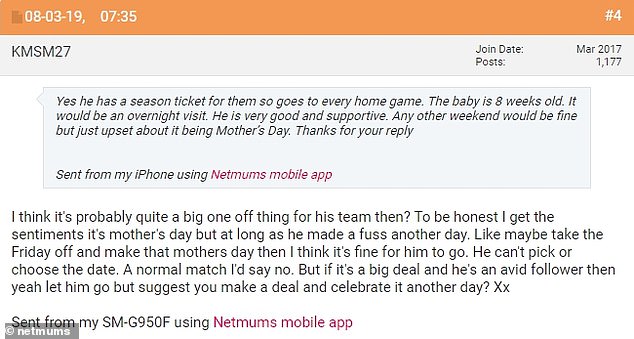 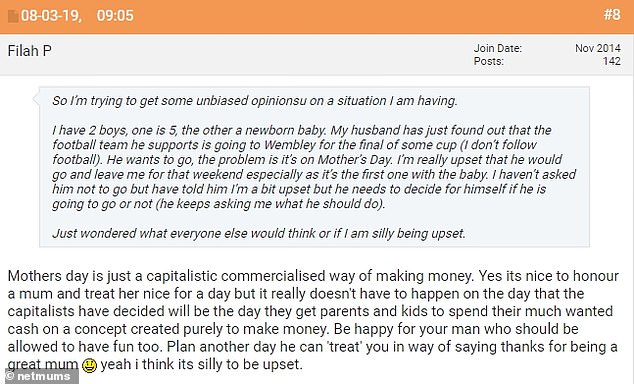 ‘To be honest I also think that if he didn’t go, after the event you’d feel guilty. Things like Mother’s Day seem like a huge deal at the time but in the grand scheme of things they really aren’t, after all, your kids and hubby love you just as much the other 364 days a year!’

A small number of users of the online forum agreed with the mother that they would be unhappy if their husband didn’t prioritize Mother’s Day over a football game.

A user speaking under the handle ‘Georgia S’ wrote: ‘I’m obviously in the minority also here it seems but I’d be quite gutted too. The one day that it’s supposed to be all about celebrating mums and how great we are lol and he’s off at a football match.

‘The fact it’s the first one with the new baba would sting me a bit too. I think it’s fine to be disappointed that he won’t be there and it’s good you’re not forcing him to stay home with you out of guilt.’ 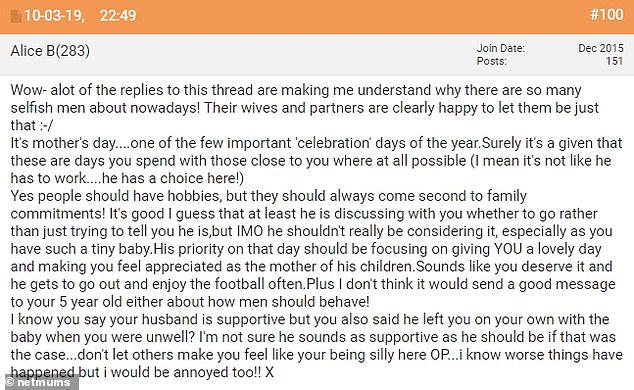