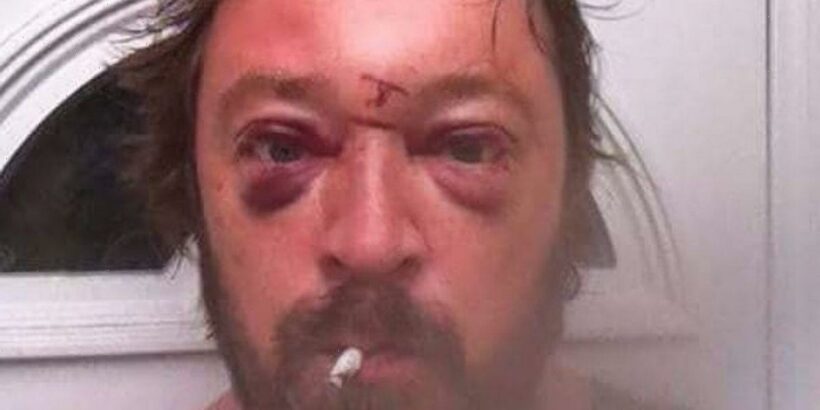 At his lowest point he was drinking almost two bottles of whiskey a day.

Decades of struggling with alcoholism had already cost him several jobs, a number of relationships and even his marriage.

But it was a bloodied, black-eyed selfie taken the morning after a sozzled and painful night before which finally made Gene Davies give up booze for good.

The 49-year-old had taken the photograph shortly after scalping himself in his sleep, a drunken accident which could have very nearly killed him.

It happened after the drummer – a cousin and former bandmate of Stereophonics' Kelly Jones – had begun lodging with a friend, having been asked to leave the family home due to his addiction.

"I was given the spare room, which had a bunk bed in it, and I must have sunk into a heavy sleep," he said.

"But when I awoke in the night needing a pee I quite forgot I was six feet up and dropped like a stone to the floor, taking out a chest of drawers with my head on the way down.

"The drawers were totalled but somehow I wasn't knocked out. So I staggered to the bathroom to see the mess I'd made of myself and whether or not I could just wrap it in a tea towel and go back to bed.

"But when I saw the blood I lifted up my hair and a big flap of skin came with it. I realised I'd partially scalped myself and could actually see my skull.

"I remember thinking, 'Nope, it's the hospital for you, pal'."

Gene, from Cwmaman in South Wales, said his first introduction to alcohol had come in his early teens whilst playing drums in various bands – including one called Silent Runner which featured a young incarnation of 'Phonics frontman Kelly on guitar and vocals.

"It was easy to get served if you were underage back then – lots of blind eyes were turned if we wanted to grab a crafty flagon of lager," he added.

"I was forever being the showman, trying to make people laugh, and my boozing increased exponentially."

He'd stash bottles around the house and revealed how his lowest point would come one New Year's Eve when he hoovered up a spilt pint from the "dirtiest, most disgusting pub carpet you've ever seen" using a straw.

Even getting married in 2010 and having a son didn't alter his behaviour and he and his wife eventually split up under the strain.

But it was staring at that picture of himself – cut, bruised and bloated – which at last made him decide to dry out for good.

"That was four years ago this month – not touched a drop since, " said Gene, who recently celebrated the milestone by naming his sobriety 'Madeline' – after the actress Madeline Khan in his favourite film Blazing Saddles – and buying 'her' a birthday card.

"I did it to mark still being on the wagon and to remind myself that it's a far better ride than the one I was on.

"I don't regret those lost years though because had I not gone down that route I wouldn't have met my ex-wife, with whom I'm still friends, and I wouldn't have become a father.

"Now it's all about focusing on him and being the best dad I can be."