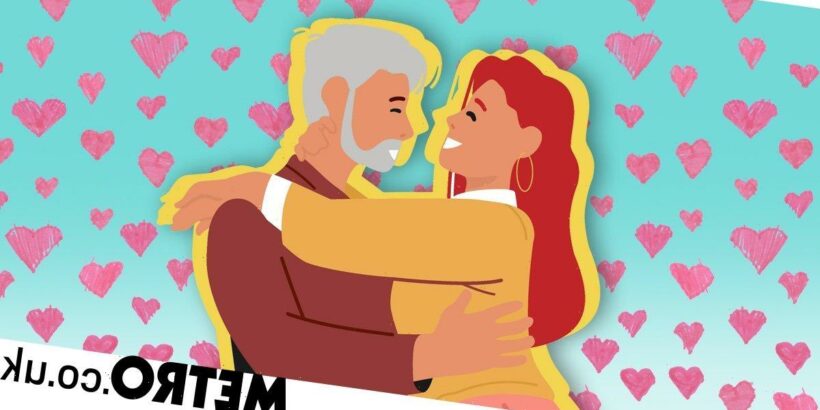 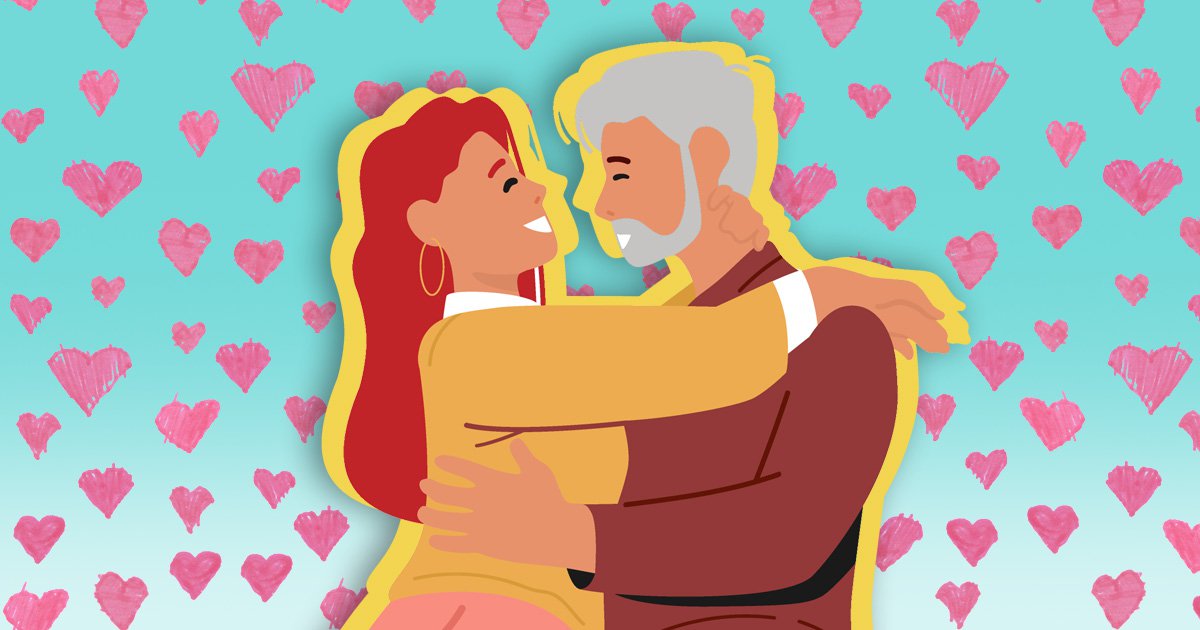 Is age really just a number? Does it matter? Why do we care so much?

For some people, whether intentionally or serendipitously, being with those younger – or older – than them brings great joy.

And as long as two consenting adults are in an equal, mutually beneficial, set up (whatever that might be), it’s nobody’s business but theirs.

Culturally, however, it’s one of those eternally eyebrow-raising subjects – something that’s exacerbated by the media scrutiny of famous relationships with big age differences.

For some, it can be the best thing that’s ever happened to them, yet they still feel ‘looked down on’ and experience judgement from friends and family. Others do admit that it comes with challenges.

But there’s a lot more to life than the number of years you’ve lived on the planet.

‘Dating isn’t a search for someone who is exactly the same as you,’ explains Charly Lester, expert at dating app Inner Circle.

‘It’s about finding someone who compliments you and who is in the same stage of their life. Someone doesn’t need to be the same age as you to want the same things you do.’

Alex Mellor-Brook is co-founder of Select Personal Introductions. He says: ‘Plenty of successful relationships have big age gaps. It is not the age gap that makes a relationship successful.

‘It is the trust, respect and support the couple have for each other. Being able to communicate, listen and be honest with each other is incredibly important. It has nothing to do with a number.’

In fact, some studies have found the relationship satisfaction reported by age-gap couples is actually higher, with greater trust and commitment, as well as and lower jealousy levels than similar-age couples.

Ultimately, we think everyone should do what makes them happy. We spoke to people who are big fans of the age gap relationship (or the age gap fling) and all it has to offer.

20 years ago, she was running an advertising agency in New York, and was asked to pitch for an online dating brand’s account. In order to experience the client’s product, Cindy signed up up to try it for herself.

‘I posted my profile on a bunch of sites, with complete honesty about everything, including my age,’ she says.

‘Much to my surprise, 75% of the responses I got were from younger men.

‘I hadn’t expected that, but thought “hey – works for me!” And I’ve been very happily dating younger men ever since.’

Cindy now meets the younger men she dates on cougar dating sites. However, she explains that she is nobody’s definition of a ‘cougar’.

‘No matter how casual the relationship, I have one fundamental criterion for the younger men I date: they have to be a very, very nice person,’ she says.

‘Ironically, this means that my so-called casual relationships often last a lot longer than other people’s so-called committed ones. I date younger men off and on for periods of two, three, four, five, ten, fifteen years.

‘They may go on to date women their own age. They may get married. Because we like each other, we stay friends.

‘Every so often, their relationships end – their marriages may end – and when that happens, they come back.’

‘I’m not a relationship person,’ she says. ‘I adore being single, I cannot wait to die alone, and I date younger men casually and recreationally for sex.

‘I like lots of stamina and very short recovery periods. I wouldn’t get that with men my own age,’ she explains.

Cindy is ‘deliberately public’ about the fact that she dates younger men.

‘And I want younger men to know we need many more of them to be open about that, to break down this ridiculous, sexist prejudice.’

Rosie and Oscar have been together for a year and a half, after starting dating in lockdown.

Because of the circumstances when they met, the couple have spent ‘a maximum of three days’ apart. ‘So it feels like we’ve been together a lot longer,’ Rosie tells Metro.co.uk.

Rosie is 24 and Oscar is 47. ‘But he acts like a child 90% of the time, so the age gap feels considerably smaller,’ says Rosie.

‘I think I also have a relatively mature brain for my age which is what attracts me to older men,’ she says.She notes that her ex was 41.

‘I’ve always been referred to as a bit of an old soul. The kind of person that used go to my friends houses and spend half the time chatting to their parents when I was younger.’

However, people do sometimes comment on their age gap, with ‘daddy issues’ being a common one.

‘I have an incredible relationship with my dad and he’s one of my favourite humans on the planet – so I always find it a bit irritating,’ she says.

‘I did also get the awkward “is Oscar your dad?” question the other day. But I laughed it off, we don’t really take other people’s opinions very seriously.

‘Every moment is full of laughter, and he has an incredible network of friends who have welcomed our relationship so lovingly.’

She believes that age is just a number. ‘Soul age, life stages, aspirations, goals, and what your future vision looks like – are all much more important factors.

‘I enjoy learning so much from him, and I like to think I teach him a lot about life too.’

David and Taylor have been in a relationship for four and a half years, but have known each other for about nine, first meeting at choir – where Taylor is the conductor (and sings soprano) and David sings bass.

‘That said, he is such a big kid – I think he keeps me young sometimes,’ she says.

Despite technically being at different points in their life – going by age – their relationship works well, in some ways because of this.

‘I have an incredibly demanding job, while he is retired,’ she says. ‘David is able to be flexible and fit in around the demands of my job in a way that I think would be really difficult for another working person.’

Taylor does acknowledges that – to her -age isn’t just a number, and their age gap does sometimes have an impact.

‘For instance, throughout the pandemic, because I’m with an older man, I made sure that all of the decisions I was making were consistent with the fact that he’s more vulnerable.’

However, she adds that age isn’t necessarily a factor in everything. ‘I think who we connect with is based on much more than how long we’ve lived,’ she says.

‘It’s more to do with how our similarities overlap, how our differences enrich our understanding, and how we journey with one another through this wonderful adventure called life.’

In terms of reaction from other people, the couple sometimes have people saying things like: ‘How do you feel about the fact that he’ll die years before you?’

‘But,’ she points out, there is no guarantee whatsoever that someone who is your age is going to live as long as you do.

‘While being in a relationship with someone who is your age so that you can grow old with them is a lovely prospect, there is no assurance that it will.

‘Love now, and live while you can.’

Verity describes herself as a ‘serial dater’ and her most memorable relationship was with a man who was more than twice her age.

‘It was a chance encounter which led to a totally unexpected and fleeting whirlwind,’ she says. She had just turned 24, and Grant was 51, 27 years her senior.

‘We met at a glamorous bar in Chelsea on a Friday night after work,’ Verity continues.‘It felt scary and totally exhilarating all at once.’

She says that, while Grant’s age was never the main attraction to him, he was ‘wise, capable and  experienced,’ as well as, ‘charming in a way men my age weren’t.

‘Our connection felt so authentic that our different ages rarely came to my attention during our time together. Our conversations were fascinating and intense, and the intellectual thrill was like nothing I had ever experienced.

‘I also went to some incredible restaurants and hotels in London which was obviously really fun,’ she adds.

‘Part of me felt like I was living the Pretty Woman dream, especially when he took me to a fancy chocolatier, and said I could choose one of everything.’

‘I was certainly fed-up of the conventional dating-app scene at the time, which felt like a depressing merry-go-round of bad dates and occasional ghosting.’

In terms of age gap relationships, Verity says she has a mixed stance.

‘To argue that age is the most conducive and necessary component for a successful relationship is an insular, stale mindset.

‘However – it has to be said that age gaps do not come without their problems.

‘With Grant, our age gap was vast, our expectations and approaches to life totally different. It sort of crashed and burnt in the end, but I am so grateful for the experience.’

Finally, she adds that if you are going to involve yourself with older man in a ‘fleeting, short-lived way’ like she did, then you have to manage your expectations.

She advises: ‘Ensure you’re on the same page. Establish boundaries. Don’t get ahead of yourself; the second you do, it can get messy.’