You probably won’t have heard of an Australian filmmaker named Goran Stolevski.

But the Macedonian-born, Melbourne-raised writer-director has been winning acclaim for his first feature film,You Won’t Be Alone, which he shot in Serbia after turning down a $US3 million ($4.3 million) offer from a Hollywood distributor. 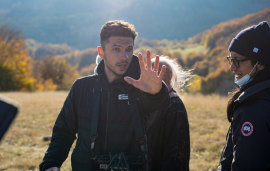 “I wouldn’t even have called myself a filmmaker; I was just unemployed”: Writer-director Goran Stolevski on the set of You Won’t Be Alone in Serbia.Credit:Branko Starcevic/Focus Features

The supernatural folk-horror tale, about a girl who becomes a shape-shifter in a 19th century Macedonian village, was warmly reviewed when it had a limited cinema release in the US recently –after premiering at the Sundance Film Festival – with critics using terms like “ravishing”, “wildly original” and “mesmerising”.

It has been just as warmly received screening in competition at Sydney Film Festival, which finishes on Sunday.

Stolevski’s second film, the gay coming-of-age drama Of an Age, has been selected to open Melbourne International Film Festival in August. He shot it in Macleod, in the city’s north-eastern suburbs, last year.

Stolevski is now shooting a third film, the queer drama Housekeeping For Beginners, in Skopje, North Macedonia. And he is talking about the next two films he is desperate to make from the 13 scripts he has written.

All of this makes him seem like an overnight success.

“I’ve been willing to become an overnight success for 20 years,” Stolevski says on a Zoom call from Skopje.

The 36-year-old, who arrived in Australia from the former Yugoslavia at the age of nine, is baffled by what has been happening. 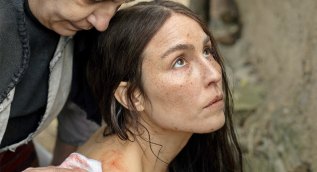 “The last three years make no sense considering the lead-up in the previous 17,” Stolevski says. “I was unemployed for a very long time as a struggling filmmaker.

“I wouldn’t even have called myself a filmmaker; I was just unemployed.”

A self-described bookish and isolated boy, Stolevski started watching videos in his Melbourne school library and, by the age of 12, was getting through 300 to 400 films a year.

Since deciding to become a filmmaker in year 11 at Macleod College – socially awkward but determined – he has made 25 shorts in 10 languages while writing feature film scripts. He jokes that his specialties are difficult women and gay sex.

“By the time I started achieving success with the shorts, which took a very long time, I had, for lack of a better term, a catalogue of scripts,” he says. 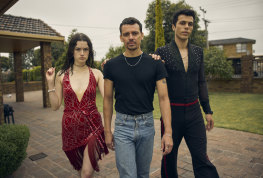 After Stolevski won best short at Sundance Film Festival in 2018, Hollywood’s Focus Features wanted to back You Won’t Be Alone before realising he planned to shoot it in his grandparents’ Macedonian dialect.

“They offered me an extra $3 million to shoot it in English but I said no, therefore giving away a lot of my income which we had to reinvest in the film,” Stolevski says. “But I was in a very lucky position where I had producers who let me say no, because they also had to reinvest their income.”

Stolevski says it took “35 years of a very complicated life” to make his first feature so did not want to compromise.

“It’s actually offensive to me when films are set in Eastern Europe but everybody speaks English,” he says. “Reading subtitles is really uncomplicated.”

The success of that film has meant “the people who used to reject my financing applications give me financing”.

Stolevski admits he has long been driven, though he thinks he has calmed down now that he has made two features.

“I was driven by the idea of having a body of work, of films that stay after me, after I was alive,” he says. “Even at 17, I thought in those terms.”