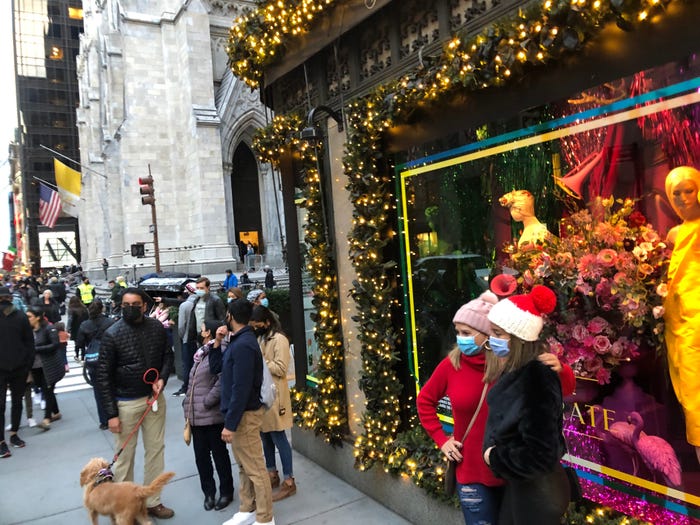 When I was young, my family and I would take a train from my hometown on Long Island to Manhattan's Fifth Avenue every December to do our Christmas shopping.

While walking down the famous avenue, we would shop at the big-name stores, enjoy Saks Fifth Avenue's window display, and take in the Rockefeller Christmas tree. It's a tradition I've kept alive most years, especially because I hate shopping online.

But this December is different. The coronavirus pandemic has completely altered the way we do almost everything in our lives, and many businesses are not operating as they once were.

To see how the pandemic has affected holiday shopping on Fifth Avenue, I ventured to the famous street. I sought to stay as safe as possible by wearing a mask, endeavoring to social distance whether inside or outside, and packing lots of hand sanitizer.

What I found both surprised and horrified me.

On a Sunday afternoon in December, I took the train from Brooklyn to the first stop on my attempted shopping spree: Bryant Park in Manhattan. 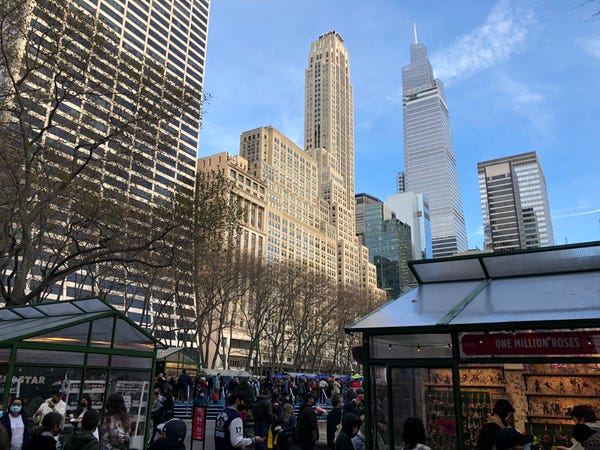 The Bank of America Winter Village pops up in Bryant Park every year around the holidays. As well as being home to an ice-skating rink and a large outdoor restaurant, it's typically a great place to shop for local and unique gifts from artisans in and around the city. I always love going to these shops because it feels like a small town fair in the middle of a giant city.

When I stepped into the park, I was instantly surprised to find big crowds, even though the market itself was scaled back. 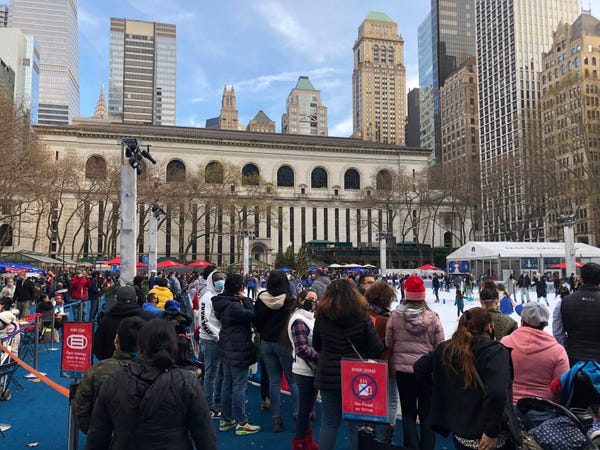 In 2018, there were 170 pop-up shops. This year, there are a little more than 50. But that didn't stop the crowds from flocking to the park and causing the "congestion" that organizers wanted to avoid.

That said, this crowd was nothing compared to the ones I found later in the day.

Although everyone was wearing masks, per the park's rules, I still didn't feel comfortable about the lack of social distancing around the small shops and decided to leave. 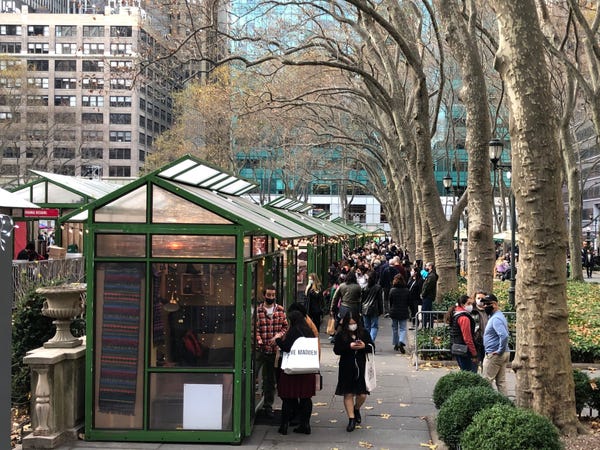 The Centers for Disease Control and Prevention recommends keeping 6 feet apart from people you don't live with, whether or not you're inside or outside, and whether or not you or other people are showing any symptoms of COVID-19.

Instead of purchasing gifts at the Winter Village, I quickly bought a pretzel and didn't get any Christmas shopping done.

I left Bryant Park and started walking up Fifth Avenue, which had fewer people but was still surprisingly crowded. 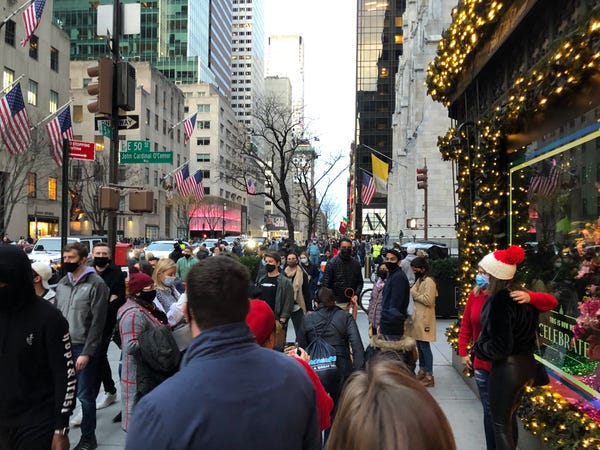 Back in March, I explored Manhattan and found a completely deserted landscape. I returned in November and found a city slowly coming back to life, but I was not expecting Fifth Avenue to have so many people this year, especially with the pandemic entering another wave.

The positivity rate in the city is around 4%. Governor Andrew Cuomo just announced the end of indoor dining in New York City for the foreseeable future.

To get away from the crowd, I dipped inside Barnes & Noble and then Urban Outfitters. 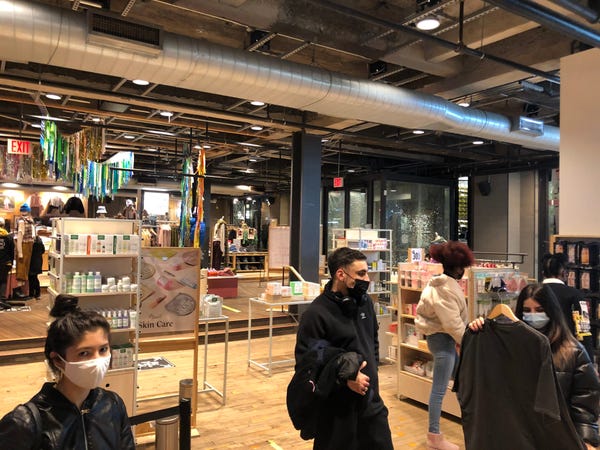 In both stores, I noticed that the usual holiday shopping crowd was smaller than in previous years, yet there were still more in-person shoppers than I expected.

H&M also had a crowd in the store, but it wasn't as busy as previous holiday seasons. 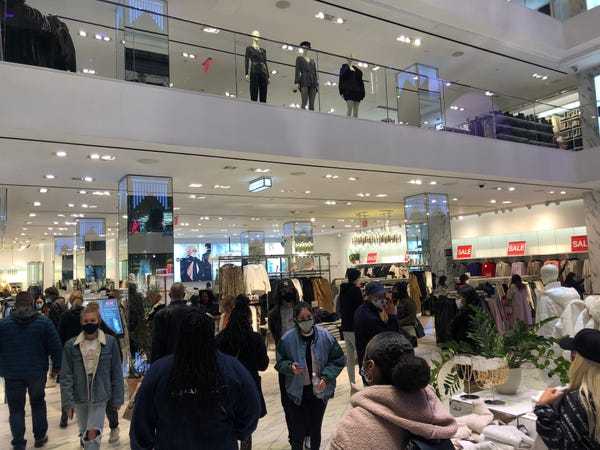 After nine months of avoiding crowds and strangers, even this smaller crowd felt like a lot.

Most notably, there weren't long lines at the checkout counters. 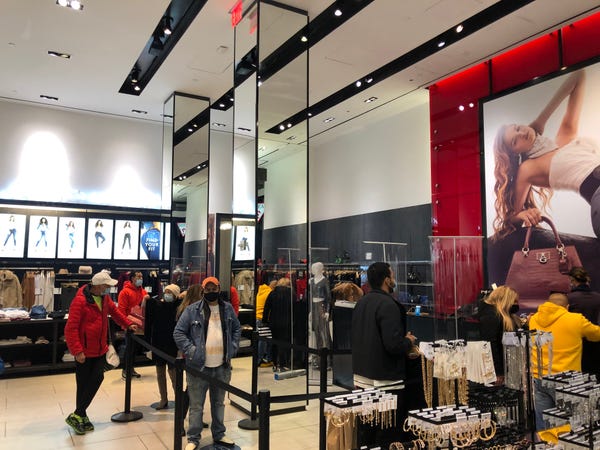 In typical years, it's not uncommon for checkout lines to wrap around the stores during the holiday season. This year, however, there were practically no lines, like this one at Guess.

There were, however, lines of people waiting outside some stores. 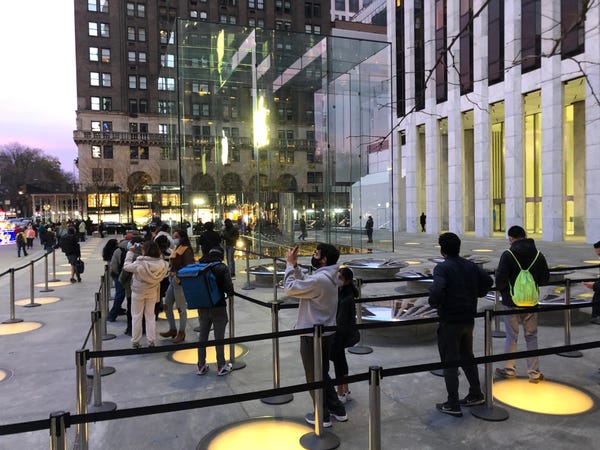 Apple had a line to get inside. I also saw a line outside a few other smaller stores like Ugg and Kinokuniya New York. I only waited in line to get into Five Below, as they were controlling the occupancy number to increase social distancing.

Each store had tape on the floor to direct traffic and to ensure people were staying 6 feet apart. 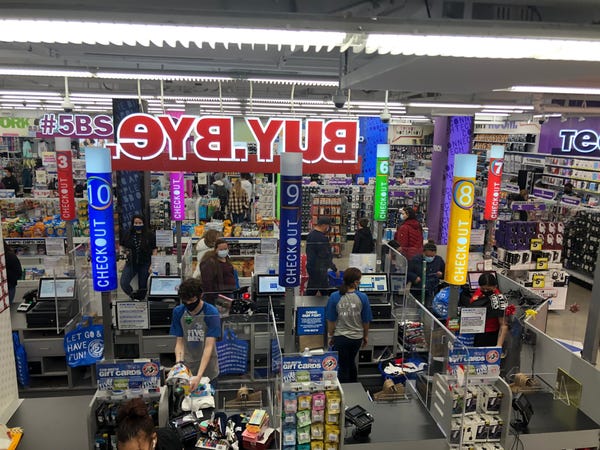 While in Five Below, a message was broadcast over the loudspeaker, reminding customers that they must stay 6 feet apart. But from what I saw, no one in the store was mindful of their proximity to each other.

On its website, the company says, "We've rearranged our stores a bit to provide everyone room to keep a safe social distance. our new in-store signage will remind everyone to let go & have fun (and give each other some space)."

However, during my visit, I couldn't see any employees or security guards on the floor enforcing the guidelines.

I did find everyone was wearing face masks in each store, however.

To further ensure safety, every store had a plexiglass window at checkout. 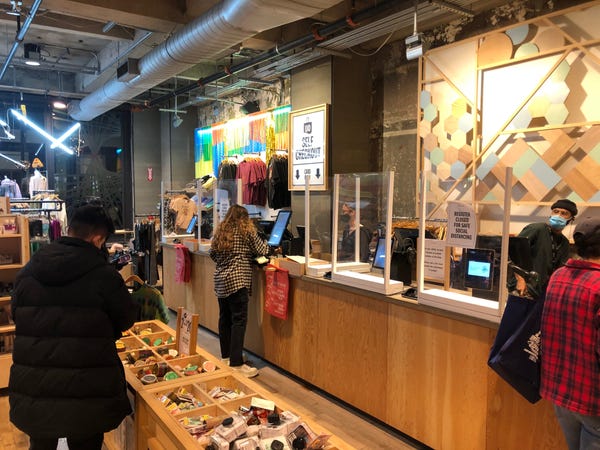 Every store I went into had some form of a divider to separate customers from employees.

After shopping in Five Below, I went back outside and found an even larger crowd by the famous windows of Saks Fifth Avenue. 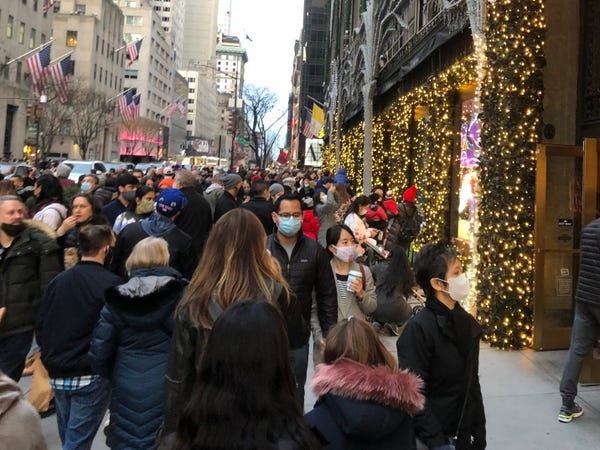 Every year, Saks Fifth Avenue turns its six windows into elaborate depictions of New York during Christmastime. I remember visiting the window displays as a child, and I was worried about seeing them this year because I know they attract a large crowd. My fears were confirmed when I saw people gathering without any social distancing.

To escape the crowd, I ducked inside Saks Fifth Avenue, which wasn't as busy as usual. 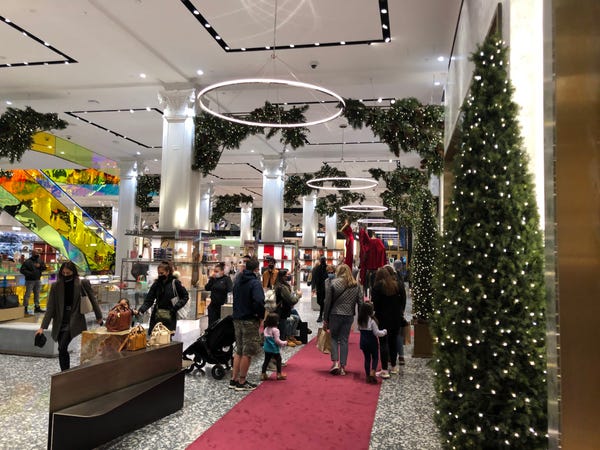 Saks Fifth Avenue is a large department store, so it was much easier to social distance inside than outside.

Once the sun set, Fifth Avenue and the area immediately outside of Saks became unbearable. 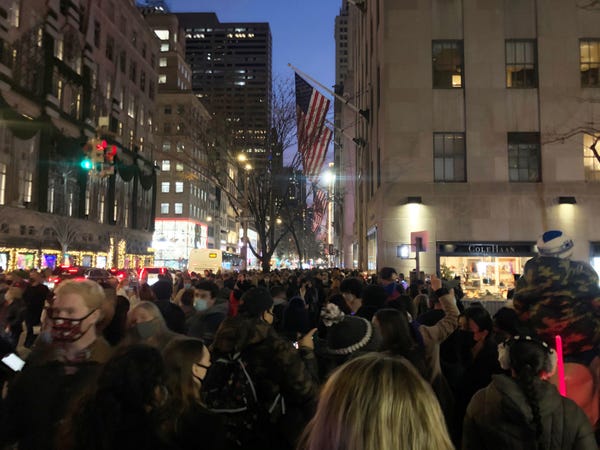 The Christmas lights came on and the Rockefeller Christmas tree became the star of the show. I remember the tree was the highlight of every Christmas shopping trip when I was younger, but this year was different for me.

Hundreds of people flocked to Fifth Avenue to see the lights, making it impossible to walk down the street. The crowd got so big that it seemed to stretch endlessly down the avenue.

Even though I was battling crowds all day, I was not prepared for the number of people on the sidewalk. Thankfully, almost everyone was wearing face masks.

After nine months of avoiding people at all costs, this was too much. I had to call it quits. 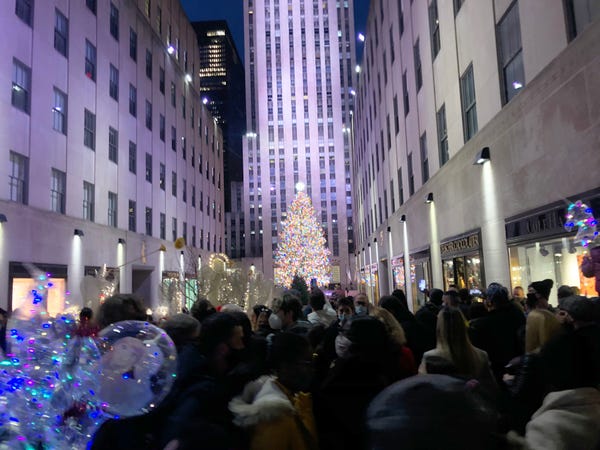 I couldn't help but think, "What are we all doing? Why are we out Christmas shopping in the middle of a pandemic?"

At the end of the day, it was a semi-successful Christmas shopping haul, but I'll finish the rest of my shopping online. 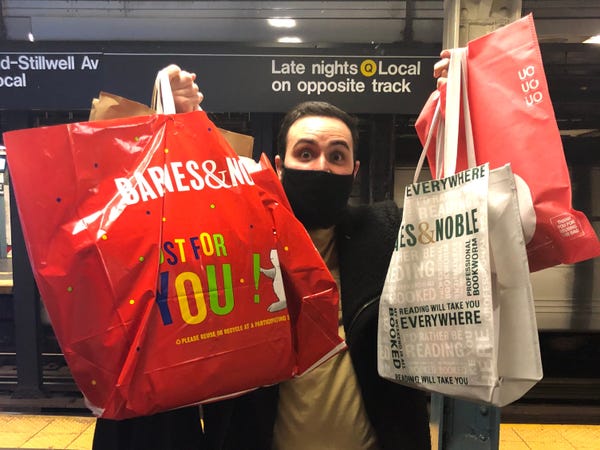 When I left the house, I expected a quieter, more peaceful day of shopping because of the pandemic. While the stores were emptier than in previous years, there were still crowds and not enough social distancing for my liking.

I'd recommend staying home and ordering from the safety of your couch this Christmas.